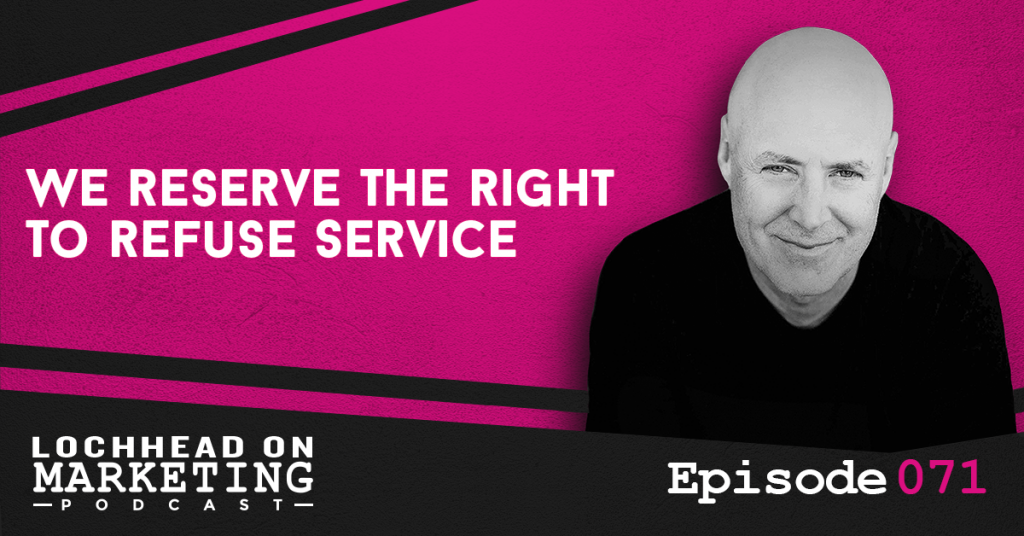 One listener writes: “This is such a confusing time and people are on edge. There’s a lot of arguing and mistrust in the US. It seems like we see more people acting out. In our case, we’ve had some customers behave really badly. When is it okay to turn a customer away?”

In this episode, Christopher shares his views on this matter about your right, as a business, to refuse service to customers.

What The Law Says

The law states that you are allowed to refuse anybody’s service, but you can’t do it on the basis of color, race, gender, sexual orientation, and other subjects along those lines. What Christopher advises is to seek legal advice and make sure to have consistent guidelines to enforce on your business, so your employees are well-guided.

“I think it’s okay to refuse service to Anybody who’s being a shithead and we had a situation happen here in the Santa Cruz Monterey Bay Area.” – Christopher Lochhead

Kicked Out Due To Bad Behavior

Christopher shares an incident that happened recently in a restaurant in Santa Cruz Monterey Bay Area called Bernardus Lodge where an Asian-American was spending their Fourth of July holiday. A Tech CEO, named Michael Lofthouse, who was also dining in, gave out racial slurs to the family.

The restaurant attendant, Gennica Cochran, immediately asked Michael to leave the premises to protect their customers.

“Number one, the folks at the who run the Bernardus Lodge have some core values and that in one way or another, whether it was formal or informal, they had communicated to their team, including, of course, Gennica Cochran and that there were certain behaviors they would tolerate. Racism, acting out and being an asshole clearly was something they were not going to allow. Gennica felt empowered to do that. I don’t know if she asked for permission. I don’t know what she did. But she took action.” – Christopher Lochhead

Christopher also shares some of his personal experience with enforcing wearing a mask. He is  a strong supporter of this and he has received some backlash because of being vocal about it

“If you don’t like me, or you don’t want to listen to my podcast, because I’m trying to promote wearing masks in the United States, that’s okay. I think whatever the issue is, there comes a time in our lives as people and as business leaders, where we have to be clear about our core values and stand up for them.” – Christopher Lochhead

To hear more about having the right to refuse customers, download and listen to this episode.

Share on FacebookShare on TwitterShare on PinterestShare on LinkedInShare on Email
Posted in Lochhead on Marketing and tagged Leadership, Legendary Stories/Shits & Giggles