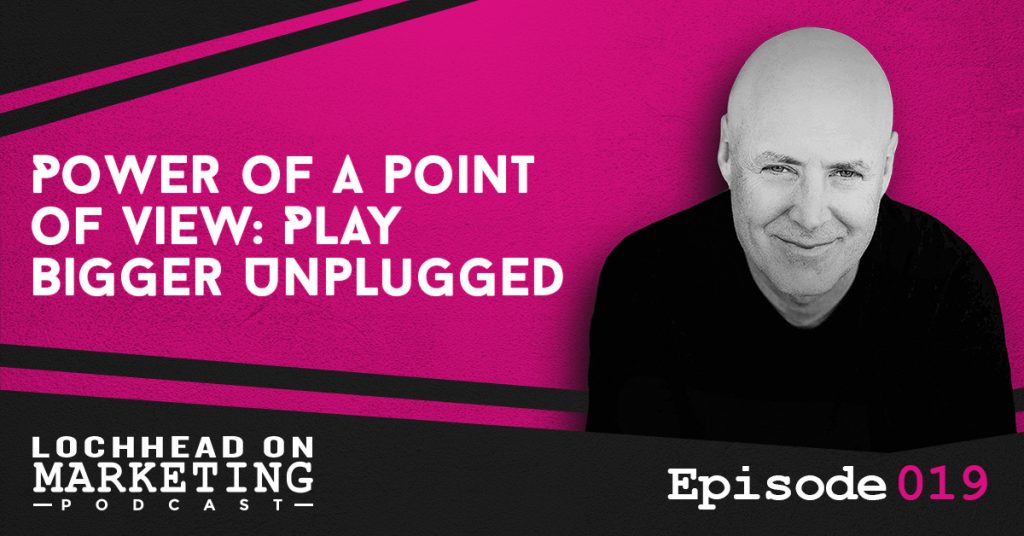 Christopher Lochhead shares an excerpt today from his first book, Play Bigger: How Pirates, Dreamers, and Innovators Create and Dominate Markets about the importance and the power of a point of view. He shares to us why legendary marketers opt to sell a POV, rather than sell a product or service.

Market the POV, not the product!

Legendary creators and designers, market the point of view or POV, not their product and services. When companies show consumers the idea or the problem that they envision to solve, consumers will most likely become interested in the products and services around that idea.

“Its counter-intuitive for most marketers, innovators and CEOs. We think what we’re doing in marketing, is marketing a product with features and maybe, benefits. When in reality, category creators and designers market the POV, because once people subscribe to your way of looking at things, they are going to be interested in what you have to market.” – Christopher Lochhead

POV is the company’s true North. It doesn’t change over time, unlike messaging. Companies such as Salesforce or American Airlines have consistently focused on their POV. These are companies who have anchored their business to a point of view, about what they stand for in the world.

Messaging is Tailored POV for an Audience

Christopher cites examples on how messages are tailored POVs for an audience, idea or a trend. He shares how they train an entire company on how to deliver their POV. Employees watch a 10-min presentation on thePOV of the company. The ultimate goal is for the employees to be able to deliver the POV.

Here is an excerpt from Chapter 5 of the book Play Bigger:

“Stories have always been an industrial-strength force in human progress, from the epic poems of Homer to the tales of Marco Polo, Shakespeare’s historical plays, the novels of Ayn Rand, and biographies of Steve Jobs.

When traders on Wall Street consider a stock, they often ask, “What’s the story?”

When pitching a venture capitalist, entrepreneurs get funding when they craft a great story, and now a cottage industry offers pitch training.

Raw information reaches us on an intellectual level, but stories reach into our hearts and our pants.

Decades of brain research have demonstrated that stories have a more lasting impact than facts.

One 1969 Stanford study, “Narrative Stories as Mediators for Serial Learning,” showed that students remembered six to seven times more words embedded in a story compared to random words. [i]

In the 2010s, Paul Zak, a professor at Claremont Graduate University found that character-driven, attention-grabbing stories actually increase oxytocin in the brain.

Oxytocin is an empathy chemical, and it motivates cooperation and understanding—quite important when trying to convince someone to, as Apple used to say, think different.

“My experiments show that character-driven stories with emotional content result in a better understanding of the key points a speaker wishes to make and enable better recall of these points weeks later,” Zack wrote.

He added a swipe at the way too much business has been conducted for far too long:

“In terms of making an impact, [storytelling] blows the standard PowerPoint presentation to bits.”[ii]

That’s why category designers tell a story. We call that story a point of view, or POV.

After you come up with an aha of an initial market or technology insight, and after you discover and define the right category, you have to craft the story about the category that you’ll tell. You need a powerful POV.

A POV tells the world you’re a company on a mission, not a missionary company looking to make money any way it can.

It frames the new problem that your category identifies and sets you up as the answer. When someone can articulate your problem, you believe that person must have the solution.

It’s why Bill Clinton won two presidential elections by claiming, “I feel your pain,” and why Ronald Reagan beat Jimmy Carter by simply asking, “Are you better off than you were four years ago?”

Politicians are masters at this.

A great POV separates the companies, products, and categories that people love from the ones they, at best, tolerate.

When you start to think about it, you can easily see the difference between a company that has a strong POV and one that has a POV black hole.

In grocery stores, you can sense that Whole Foods has a clear POV, built around healthy gourmet products, while Safeway seems to have no POV at all other than selling groceries.

Southwest Airlines has a palpable POV; United Airlines does not.

Apple has a POV; Microsoft does not.[iii]

A POV conditions the market to accept and embrace the company’s vision and have the same aha the founders experienced.

The story leads potential customers on their from/to journey, so they understand both what is missing and why your company can fix that problem.

A POV has to shift people’s minds so they reject an old way of thinking and come to believe in something new.

It has to reach people on an emotional level.

No one remembers what you say—but they remember how you made them feel.

That feeling can be excitement about something that’s coming, or fear of missing out.

To reach people’s emotions, a POV has to sound the way people talk.

It has to be simple, direct, visceral. Language matters! (check out episode Don’t Take My Word For It, inspired by Lee Hartley Carter)

Nobody in the history of the human race has ever been moved to joy or tears by a train wreck of lazy business babble.

People relate to and remember stories—even people who make a living analyzing facts.

A POV tells a story with a beginning, middle, and end.

It tells the world why this category and the company creating it are different.

Different forces a choice between what was and what can be.

A POV built around better is about comparing your offering to the thing customers already know.

Better reinforces the power of the category king you’re trying to beat (who by definition is not you).

If customers think two companies are tied in the better wars, they just choose the category king—or the lowest price if there’s no clear king.

A great POV takes you outside the better wars and sets you in a different space all your own.

A well-executed POV gives the company identity and culture.

It becomes the invisible hand that guides your priorities.

A powerful POV guides every decision the leadership team makes and every initiative it pursues.

The POV helps employees intuitively feel how they should perform their jobs so they align with the company’s strategy.

Most great, enduring companies have a POV imprinted on their DNA.

To hear more about the power of a point of view and more relevant information from Christopher Lochhead, download and listen to the episode.

Lochhead on Marketing: Don’t Take My Word For It

[iii] At least it does not in the 2000s. In the 1980s and 1990s, under Bill Gates, Microsoft certainly had a POV. Roughly translated, it was: “A computer on every desk, all of them running Windows, and we’ll bulldoze the fuck out of anyone who gets in our way.” In the 2010s, under a new CEO, Microsoft is again trying to find its voice.