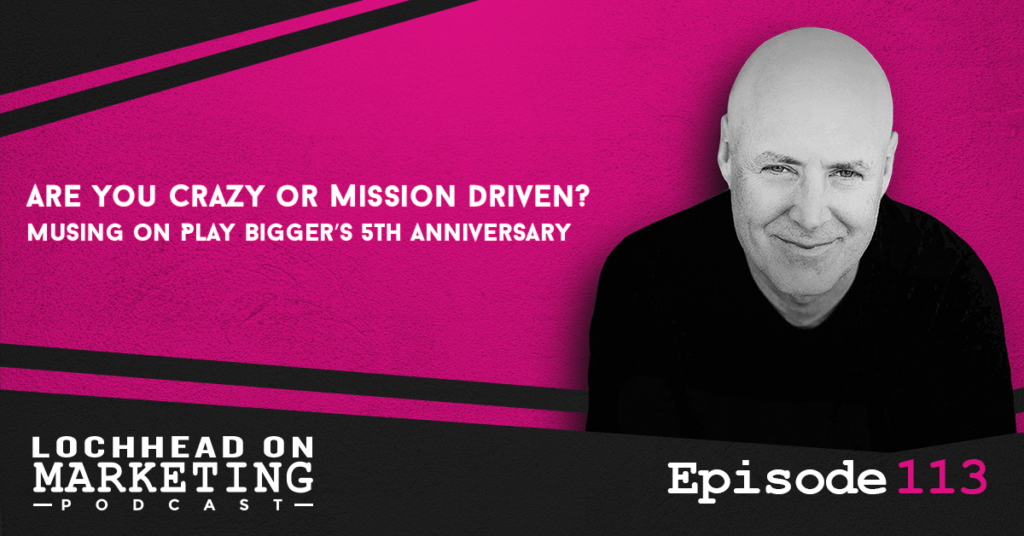 Welcome to this very special episode of Lochhead on Marketing, on what is the week of Play Bigger, my first book’s fifth anniversary of publication.

Recently on Follow Your Different, we had on Captain Paul Watson, who is the co-founder of Greenpeace and the founder of Sea Shepherd. Sufficed to say, Captain Paul is vey mission driven. Some would call him a saint, while others call him an eco-terrorist. What I could tell you for sure is that Captain Paul, like almost every other legendary person, is “kind of crazy”.

So in this episode of Lochhead on Marketing, the fifth anniversary of Play Bigger coming out, let’s talk about the difference between being passionate and possessed and what that means.

What Comes After Thinking It

“Never give up on something you can’t go a day without thinking about.”

What he didn’t say is what you should do if that thing drives you nuts. Is this thing that’s driving you nuts? The difference between choosing a passion and being possessed? Now that you’re thinking about it, what if you really can’t stop thinking about it all the time?

In the end, all you could do is embrace it and call it your own. What happens after that? What happens if when you share it with people eight out of 10 times, they think you’re nuts or you fail? Now imagine if that something causes you to fail 8 times out of 10 for 30 years, then what do you do?

It’s daunting, right? So what if I tell you that this is a big part of my story?

For me, my something was Category Design. This week is actually the 5th anniversary of my book Play Bigger, which introduced Category Design to the world. What I have rarely talked about is the fact that Play Bigger was my last-ditch effort to try to make category design land. It was my last effort to try to make it have value and impact at any kind of scale for entrepreneurs, for creators, for innovators of any kind.

I figured it would fail. I didn’t want it to fail, but I figured it would be because 30 years of a two hundred batting average would kind of give that to you. Well, it turns out Play Bigger didn’t fail. If you read it or shared it, I want to thank you very much, because your efforts put Play Bigger into the top one percent of books in the business book category.

There is No Cheat to Success

I wish I could tell you that having a legendary product will automatically lead it to success. It doesn’t. This was also the case when I talked about Category Design before. Entrepreneurs and other business leaders would either misinterpret it as just another marketing or watered-down messaging, which is actually one of my least favorite words in marketing.

Based on experience, it never is as easy as that. Take it from someone who fell for it and have learned his lesson the hard way.

Wait, seven years? Didn’t you say it was the 5th anniversary just now?

We took the following 30 years in the trenches. Real seven years of hard work support from countless legendary people who contributed to the ideas, who lent their advice, their experience and encouragement, who pushed us, who fought with us, who argued with us.

To hear more From Christopher Lochhead and how to toe the line between crazy and mission driven, download and listen to this podcast.