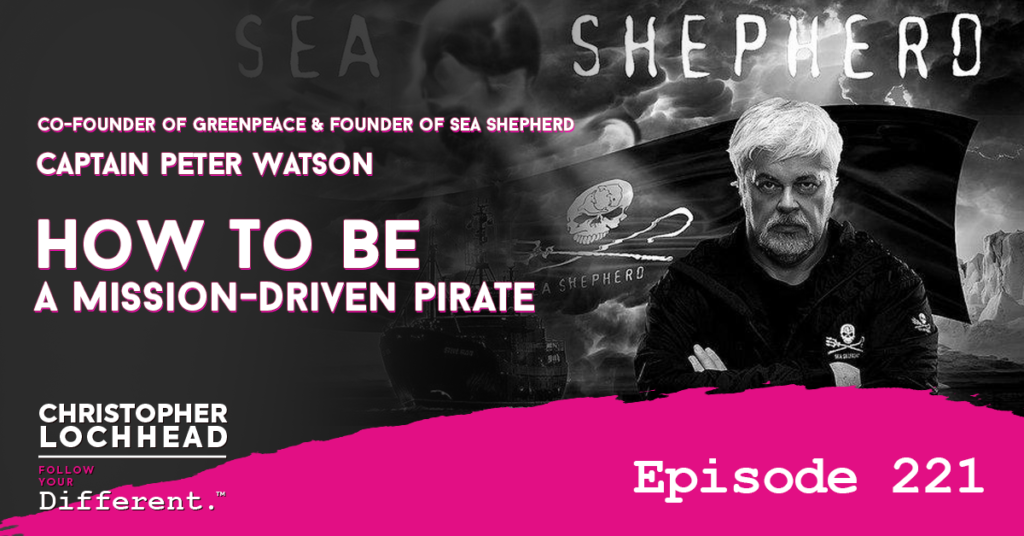 According to NOAA, the US National Ocean Service scientists estimate that 50 to 80% of the oxygen production on earth comes from the ocean. Furthermore, the ocean absorbs 50% more carbon dioxide than the atmosphere does. Scientists also estimate that about 1 million species of animals live in our oceans. So to say that the oceans matter is an understatement. It’s a fact that our oceans are the reason for life on our planet. Our guest today Captain Paul Watson says, “We are the ocean.”

In this episode of Follow Your Different, Captain Paul Watson shares his experience as a Sea Shepherd and what it takes to dedicate your life to be on a cause that matters to you. Captain Paul Watson is the founder of Sea Shepherd, a nonprofit focused on saving marine wildlife through direct interventions with poachers and the like. He was also a co-founder of Greenpeace, and talks about why he parted ways with the organization.

That said, whether you love him or hate him, every second of this dialogue is riveting. So stay tuned.

Dedication to His Cause

When asked about how he got started in his cause, Captain Paul shares that even as a child, he had always helped animals that needed it. He would free them from traps that he found around his hometown.

Captain Paul then took it to the next level by cofounding Greenpeace Foundation back in 1969, and eventually established Sea Shepherd in 1977.

As for the challenges he has faced, there was a particular one that stuck with him. This was back in 1973, when he was a volunteer medic for the American Indian Movement. Even as they were surrounded and overwhelmed, Russell Means said this to him:

Captain Paul talks about the activities of the Sea Shepherd Conservation Society, and their partnerships with several countries to protect marine wildlife. As most of their activities tend to cross over country boundaries, cooperation and coordination with local authorities is important in having an effective campaign.

He then further explains that 40% of the fish that is caught in the world is illegally caught. By illegal, it either was caught by fishing vessels crossing country boundaries without permission, by illegal or unsustainable means, or by overfishing certain species of fish due to demand.

Yet no one questions how their favorite fish arrives in the market. Worse still, not all of the fish that are caught are for human consumption.

“The other problem we have is that a good percentage of the fish caught isn’t even eaten by people. It’s fed to animals to pigs to chickens to house cats, to domestic salmon to fur bearing animals. 2.8 million tons of fish go just for cat food all the time.” – Captain Paul Watson

Captain Paul points out that it’s sad that not a lot of people seem to understand how devastating it would be for everyone if we continue this way. Plundering the oceans is causing incredible diminishment in both its biodiversity and interdependence.

As he said before, we are the ocean. If the ocean dies, we die. Simply put, the ocean is the life support system of our planet.

The ocean plays a huge role in our lives: from providing many households with food, down to the air we breathe.  Did you know that 70% of the oxygen we breathe are generated by Phytoplankton? Yet since 1950, we have lost 40% of our phytoplankton populations in the sea. This means less oxygen for everyone. This also means less food for certain marine life, which then provide nutrients to phytoplankton to thrive. Hence the destructive cycle continues.

“The real problem that we have is we have this anthropocentric point of view, we look on the planet, as it’s all about us. Everything is here to serve us, we have dominion over everything, nothing is more important than we are. But the reality is, is that many species are far more important than we are because we can, we can exist without them, they can exist without us.” – Captain Paul Watson

To hear more from Captain Paul Watson and how to be a mission-driven pirate, download and listen to this episode.

Paul Watson is the founder of the Sea Shepherd Conservation Society – an organization dedicated to research, investigation and enforcement of laws, treaties, resolutions and regulations established to protect marine wildlife worldwide.

Over the years, Paul Watson has exhibited a remarkable diversity in his activism, including:

Watson majored in communications and linguistics at Simon Fraser University in British Columbia. He has lectured extensively at universities around the world, and was a professor of Ecology at Pasadena College of Design from 1990 to 1994. He was also an instructor in UCLA’s Honors Program in 1998 and 1999.

Currently, Watson is a registered speaker with the Jodi Solomon Speakers Bureau of Boston, and regularly gives presentations at colleges and universities in the United States and at special events throughout world.

In 2000, Watson was chosen by Time Magazine as one of the environmental heroes of the 20th Century.

Check out the Netflix Documentary Seaspiracy

Here are a few articles related to Captain Paul Watson and his work:

The Guardian: A handful of corporations could hold the answer to crisis in the seafood industry