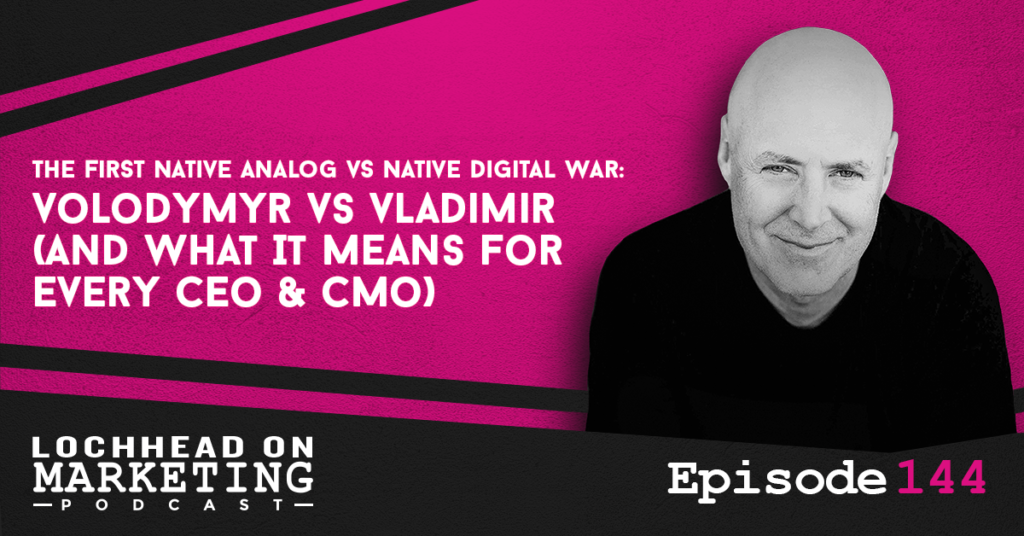 Welcome to a very special episode of Lochhead on Marketing. This episode is based on a recent Category Pirates newsletter that we wrote, which is about Ukraine, the Native Analog and Native Digital war, and what it means for every business person.

If you haven’t subscribed to Category Pirates?‍☠️ yet, click the link and check it out. You’ll find a few goodies and mini-books waiting for you there.

That said, think of this episode as more of an audiobook than a podcast, as I will be reading the article for you. Without further ado, let’s get to reading.

Over the past year, we have written extensively about the bifurcation between Native Analogs & Native Digitals.

Much has been written in the past 20 years about “Digital Natives,” but this is a loose understanding of the chasm between these two demographics. When we say “Native Analogs” and “Native Digitals,” we are not talking about age.

We are talking about identity.

“Native Digital” is not a mindset. It does not mean “some people embrace technology while others do not.” It also doesn’t mean if you’re old, you’ll never “get it.” We created the terms Native Analog and Native Digital to introduce shared language that would allow society to discuss the differences between people whose primary life experience is Analog-first (in the real world) from people whose primary life experience is Digital-first (online).

Again, this is not an Old vs Young issue.

This is a first-time-ever-in-human-history phenomenon: Native Analogs are the last of a dying breed, and Native Digitals are a new category of human.

And from here on out, there will never be another Native Analog generation born ever again.

Native Digitals grew up integrated with the digital world.

They had smartphones before they had college degrees, high school diplomas, or (for Gen Zers) a bicycle to ride around the neighborhood. (“Bicycle? Why? All my friends are online.”) They grew up integrated with the cloud. They don’t know what it’s like to not have the answer to any and every question in their pocket, two taps and a swipe away. The digital world is where they primarily live.

(And when parents restrict their screen time, whether they realize it or not, they are removing them from their primary lives and threatening their core life experience.)

The Native Analog & Native Digital lens is fascinating in and of itself, but it gets more powerful when changes in the world are viewed and understood through it.

For example: nowhere in the media have we seen anyone discuss the Russia/Ukraine war through the Native Analog & Native Digital lens.

Most people think this support for Ukraine “just happened” (the same way most business media think demand for a given business just “happens,” like the weather). It did not. The support was created—in exactly the same way Category Designers create net-new demand out of thin air.

Volodymyr’s digital dominance has led to historic pressure being put on governments and corporations to inflict more economic pain on Russia than has ever been levied on any country, ever. It used to be that what happened in the analog world dictated what happened in the digital world—but now, the two have flipped (and most people don’t see this radical transformation happening in plain sight). Digital stories, digital messages, digital photos, digital conversations, and the subsequent digital movement in support for Ukraine that has had catastrophic consequences for Russia in the analog world.

Until Native Analog leaders understand that Native Digitals are a new category of human, with a 180-degree difference in the way they experience life and world, they will not understand one of the biggest changes in the development of our species.

And their ability to successfully lead will diminish at ever-accelerating rates.

(That’s a big part of why Volodymyr is winning.)

And this is exactly what’s happening in the business world today.

To hear the whole Category Pirates newsletter article, download and listen to this episode. Better yet, subscribe to  Category Pirates?‍☠️ today and learn more about Native Digitals and how they are taking over the world without us knowing.