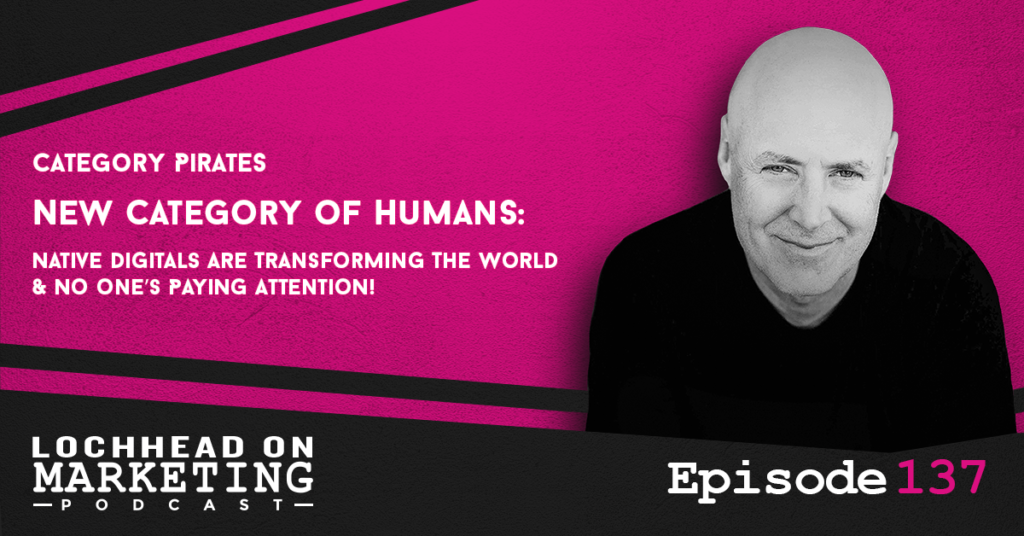 Lately, there has been a fundamental, dare I say, seminal change in the category design of human beings. That is to say, the definition of what a human is has changed. You see, if you’re 35 and up, you are the last of a dying breed called Native Analogs. If you’re 35 or younger, you are the first generation of Native Digitals.

Native Digital’s experience life in a digital first way, and an analog way, second. Native Digitals have come of age integrated with the machines. Your smartphone and technology overall are like part of who you are as a person.

Most Native Analogs do not get this. Most people are not ready for the fact that everything is moving from an analog paradigm to a native digital world.

Wait, haven’t we had this dialogue before? Yes, we did in FYD episode 250. But this change is so radical, that it bears repeating, so we are doing it here as well.  So in this two-part series of Lochhead on Marketing, we explore Native Digitals versus Native Analogs, and how it is important to realize that we are shifting to a digital paradigm faster than you think.

First off, we start as to why it is important to recognize category shifts like the one we are experiencing now. Most category kings and queens tend to fall into a trap, in which they ignore new categories that may be adjacent or indirectly related to theirs.

When a new category arises (seemingly out of nowhere), the incumbent doesn’t topple over because they were unaware of the new category queen. More often than not, they fall because they dismissed what was happening right before their very eyes.

It’s not ignorance. It is arrogance coupled with the gravitational pull of “the way it is.” Because the people profiting in the present want things to stay the same.

This is called Category Neglect. Category Neglect doesn’t come from people being stupid or lacking sufficient data and resources to spot the headwinds and tailwinds of the future. It comes from a refusal to acknowledge which direction the wind is really blowing.

Why do they fall to such a seemingly obvious trap? This happens because the gravitational pull is too strong. A company gets used to earning hundreds of millions, or billions of dollars per year, and thinks it can do no wrong.

The company becomes deeply invested in the present. Anything that threatens the way it is now is dismissed.

One of the most profound shifts happening in the world today is rooted in the ever-escalating debate between generations young and old. It is a shift hiding in plain sight. Just like the Tymshare executives staring out the window at Apple’s cranes building the headquarters of the company that would ultimately put them out of business, most people over 35 years old can’t see this shift happening.

Instead, they say to themselves, “Eh, we’ve got nothing to worry about.”

As Category Pirates, we feel it is our obligation to sound the alarm when we see rocky shores ahead. Some of us are facing a once-in-a-generation set of headwinds that could not just stymie growth, but sink our entire ship. If those of us over age 35 aren’t careful, this divide could result in one of the greatest instances of Category Neglect.

However, those who see this mega shift and act on it, on the other hand, will sail into the sunset a lot of happy pirates, make more money, and make a way bigger difference in the world.

With that said, let’s first give a better definition of what a Native Analog and Native Digital are. We’ll also define where their biggest difference lies.

There are two types of people on planet earth today.

Native analogs grew up in a time where technology was an addition or a distraction from their real lives.

Native digitals grew up in a time where their “real” lives were a distraction from their digital lives.

This is a profound shift—and no one seems to be talking about it. Even more stunning, some of the largest native digital brands on the planet are run by Native Analogs. Who don’t get it either.

To learn why it is important to know more about Native Digitals and how it can affect your category and businesses, download and listen to this episode. You can also check it out at Category Pirates.