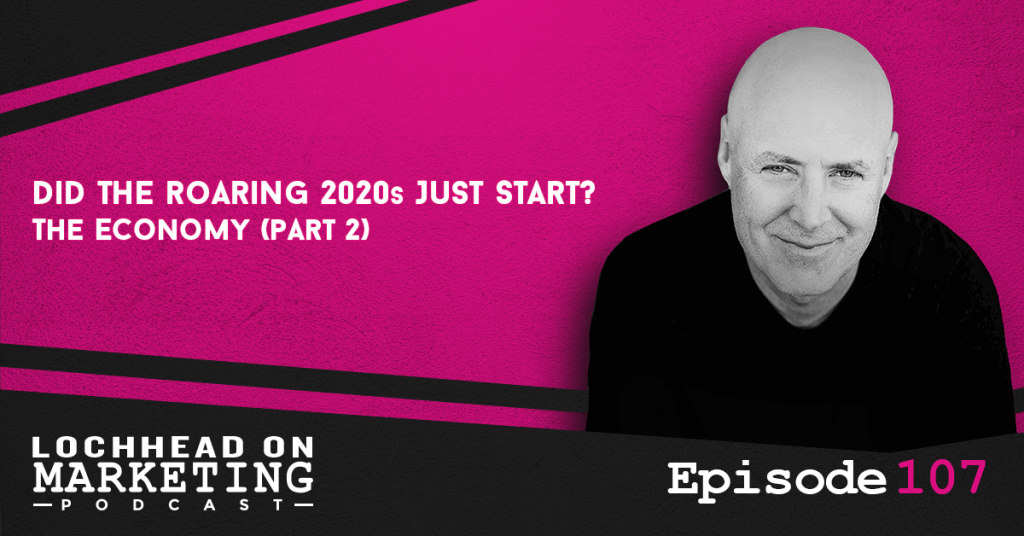 Welcome to the second of a special two-part series here on Lochhead on Marketing called, “Did the Roaring 2020s Just Start?” In this episode, we talk about the Economy.

We believe there is a chance we could be heading into a time of unprecedented economic growth. For a year now, a Categorynado of newness has been gaining momentum. There has never been a higher receptivity to new “stuff”.

Now of course I’m no economist, but I thought it would be powerful to connect some dots on some critical data points in our economy through the category lens.

This two-part series is based on a recent letter published in Category Pirates, my newsletter with co-pirates Eddie Yoon and Nicolas Cole. Go check it out today!

Before we get to the 2020s, let’s talk about the roaring 1920s, and the parallels to what we are experiencing today. At the time it was the end of a pandemic, there was an explosion of new technology, and there was a rocking and raging stock market as well as an explosion of new categories. There were also political and international tensions on proving who was the best that drove development.

Fast forward to today, and we are experiencing the same thing. Only instead of television and vacuum cleaners, our new categories involve AI, Robotics, and information technology.

“That’s what was going on in the 1920s. So for example, electric blenders televisions and vacuum cleaners were categories that took off. Now let’s think about what’s going on in the 2020s. Same thing with the pandemic. Of course, same thing with technology and new categories. Only this time around the new categories are things like AI, video communications, robots, self-learning, robot vacuums, citizen space travel, the electrification of everything and digital Education, telemedicine.” – Christopher Lochhead

We’ve talked about Bannister Breakthroughs in part one of the Roaring 2020s, and how we see it all around us nowadays. Strangely enough, the 1920s also had a lot of Bannister Breakthrough moments. There was an explosion of new categories and ideas brought about by the limitation of the pandemic.

Electricity became widespread to households, new innovations in the automobile industry drove down prices, which brought about various lifestyle and economic impacts. Mail order became a booming category, and companies like Sears. Roebuck and Co. became category kings in this regard.

If you look at how things are today, it is eerily similar yet slightly different at the same time. E-Commerce is booming, and there has been a drive for more efficient electric devices like e-bikes and robo-vacuums. Of course, there’s also Tesla paving the way for developing electronic hybrid cars.

Experts are predicting that another ‘roaring 20s’ is in the making. The Wall Street Journal reported that analysts have increased their economic growth forecast for 2021 to 5.95%

The last time the U.S. economy hit a growth rate anything like that was in 1984.

Looking at the Tailwinds

Let’s take a look at some major tailwinds that we can see on the horizon. First of all, cash. The Wall Street Journal recently reported that, “US companies are sitting on the largest pile of cash ever”.

Furthermore, according to Investor’s Business Daily, “Nine companies in the S&P 500, including Goggle, Apple, and Microsoft, each hold a net cash of 5 Billion apiece or more. Together, these companies hold a total of $325 billion”.

Simply put, there’s a lot of cash in corporations sitting on the sidelines waiting to get deployed.

On the consumer side of things, consumer spending, which accounts for more than two-thirds of U.S. economic activity, jumped 2.4% last month, according to Reuters. The Wall Street Journal reports, “consumer spending has nearly returned to pre COVID-19 levels. The average personal incomes of US households, surpassed pre pandemic levels in September.”

Not to mention all the money being pumped back to the economy via the new Biden Administration’s infrastructure plan.

So what does this all mean?

It means we could be heading into a new golden age of opportunity. As we’ve talked about before, now’s not the time to be focused on the incremental.

“Legendary companies jam the throttle hard coming out recession’s now might be the time to consider investing in innovation in new product development, in marketing, in expansion, and in new category design, and to do that ahead of the curve. Because all the research shows us that the companies who do the best coming out of recessions hit that throttle early in the recovery.” – Christopher Lochhead

To learn more about the Roaring 20s, be it in 1920 or 2020 and its effects on the economy, download and listen to this episode.

He also co-founded the marketing consulting firm LOCHHEAD; the founding CMO of Internet consulting firm Scient, and served as head of marketing at the CRM software firm Vantive. We hope you enjoyed this episode of Lochhead on Marketing™! Christopher loves hearing from his listeners. Feel free to email him, connect on Facebook, Twitter, Instagram, and subscribe on Apple Podcast! You may also subscribe to his newsletter, The Difference, for some amazing content.