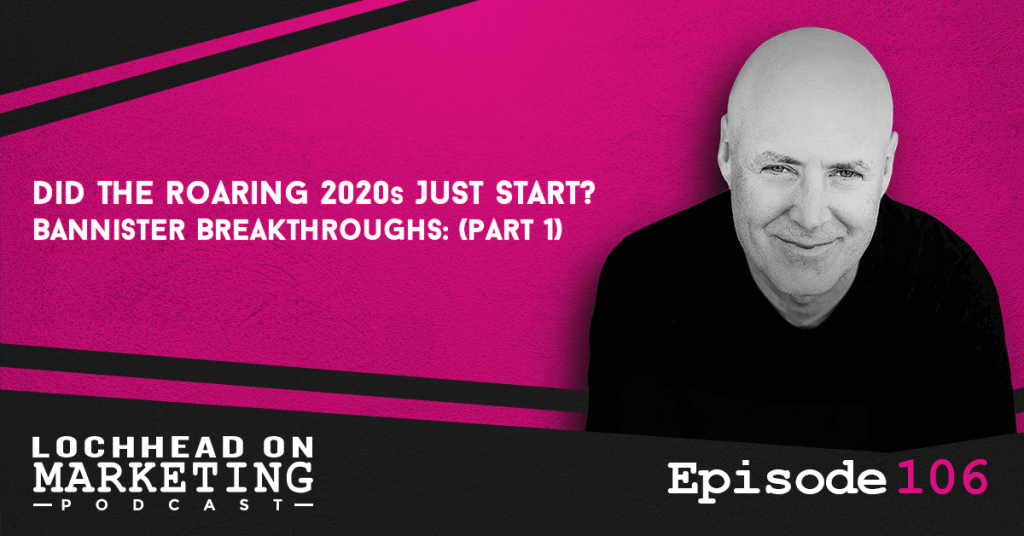 Welcome to a special two-part series on Lochhead on Marketing called, “Did the Roaring 2020s Just Start?” In this episode, we talk about the Bannister Breakthroughs, and how its influence can be seen everywhere today.

We believe there is a chance we could be heading into a time of unprecedented economic growth. We’ll get to the specifics of it in part 2, but for this episode, let’s talk about how category breakthroughs can lead to even more category breakthroughs. If we play our cards right, we might be living at the greatest time for new innovation in history!

This two-part series is based on a recent letter published in Category Pirates, my newsletter with the legendary co-pirates Eddie Yoon and Nicolas Cole.

Breaking Through the Limits

On May 6th 1954, a young British land named Roger Bannister broke the four-minute mile. Before the feat was achieved, this was deemed impossible or only doable under the right circumstances. Yet Bannister broke records and expectations by doing it his way.

The Harvard Business Review published a terrific summary of the story:

“The four-minute barrier stood for decades — and when it fell, the circumstances defied the confident predictions of the best minds in the sport. Experts believed they knew the precise conditions under which the mark would fall. It would have to be in perfect weather — 68 degrees and no wind. On a particular kind of track — hard, dry clay, and in front of a huge, boisterous crowd urging the runner on to his best-ever performance. But Bannister did it on a cold day, on a wet track, at a small meet in Oxford, England, before a crowd of just a few thousand people.”

Roger Bannister’s achievement served as the breakthrough that led to more breakthroughs in the world of competitive running. Only 46 days later, the “impossible” record was broken again. A year after that, three runners broke the four-minute mile in a single race.

Much like Bannister, legendary innovators and category designers make the impossible possible. While it may seem mundane now — like Bannister’s four-minute breakthrough, it still serves as a catalyst for others to believe that something impossible could be done. It makes people receptive to the idea that there is a possibility that they can explore which leads to a different future.

Creating a Before and After

The results of a Bannister Breakthrough or creating a revolutionary category always creates a before and after. People who bear witness to both sides are changed as a result. They either embrace it, or find new ways and breakthroughs themselves.

“Category designers, innovators, entrepreneurs, that’s what they do. They create a before and after they change reality, they make new possibilities into new realities.” – Christopher Lochhead

Category designers create a before and after they change reality, they make new possibilities into new realities.

In Rogers’ case, he smashed an imaginary what seemed like an immovable milestone. His breakthrough, like all legendary breakthroughs, opened up others to ask, “What else is possible?”

Fast forward to today, where you can see Bannister breakthroughs happening everywhere. With information at our fingertips, you’ll see people come up with new categories to solve things others didn’t know they even needed up until today.

For a more relatable example, having a large-scale remote workforce wasn’t deemed possible before. It was always a means for emergency access to work for some, and usually only available for managerial roles. Yet within the span of a year, we’ve seen businesses thrive in full-remote or hybrid setups worldwide.

As these breakthroughs continue to happen, just like back in Roger’s days, there are three categories of people:

At this unique moment in history where almost everything about the way we work, live and play is at least potentially up for change, the question we all have to ask ourselves is what kind of person am I?

He also co-founded the marketing consulting firm LOCHHEAD; the founding CMO of Internet consulting firm Scient, and served as head of marketing at the CRM software firm Vantive. We hope you enjoyed this episode of Lochhead on Marketing™! Christopher loves hearing from his listeners. Feel free to email him, connect on Facebook, Twitter, Instagram, and subscribe on Apple Podcast! You may also subscribe to his newsletter, The Difference, for some amazing content.