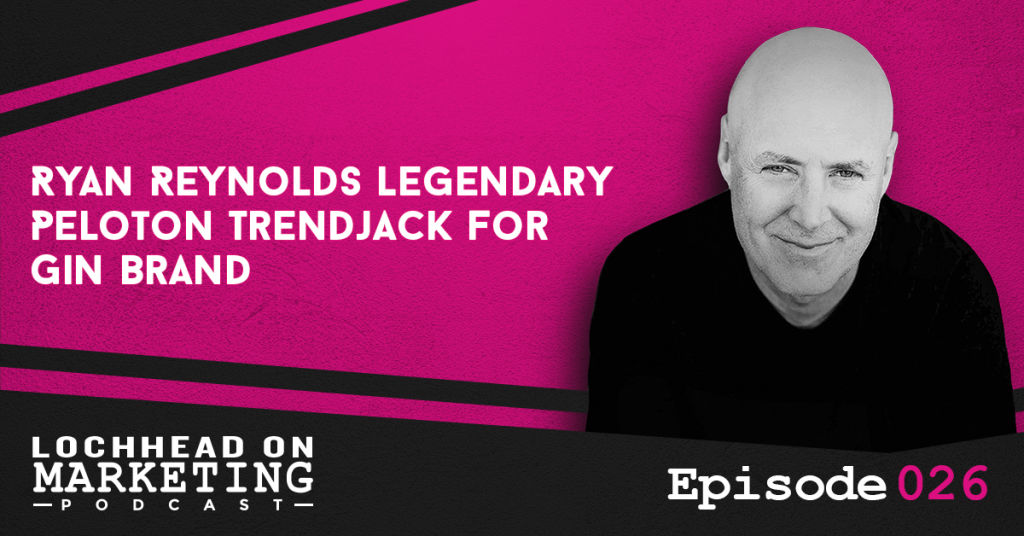 On episode #023 with Paul Maher, we popped the hood on the secret marketing / PR black art of Trendjacking. Recently, actor Ryan Reynolds (aka Marvel’s Deadpool) who also owns the brand, Aviation American Gin, just pulled off the trendjack of the year. Let’s break down the 8 reasons why this was a legendary trend jack.

The Peloton Ad shows a rich couple, with the husband, giving his thin wife an exercise bike. There was a public uproar as reaction to the ad. In fact, Business Insider reported: “Peloton’s nightmare before Christmas: $1.5 billion vanished from its market value in 3 days amid holiday ad backlash.”

Additionally, Busines Insider reported “backlash over a holiday ad that has been widely panned as sexist, tone-deaf, and dystopian.”  This forced Peloton to cut the cost of a monthly subscription to its workout apps.

Actor, celebrity, and owner of Aviation American Gin, Ryan Reynolds, pulled off, what Christopher claims, as the trendjack of the year. What he and his team did was, they inserted themselves into the controversy around the recent Peloton Bike Ad.

For less than $100K, they hired the actor who played the wife and shot a response ad.

“The ad is funny. It captures what it’s like to break up with somebody. It’s a real jab on Peloton and they never even mentioned the name Peloton.” – Christopher Lochhead

“This example begs the question: how can we be radically smart, radically creative and radically fast to trendjack the news to build our brand and category?” – Christopher Lochhead

To hear more about Ryan Reynolds Legendary Peloton Trendjack For Gin Brand, download and listen to the episode.

New York Times: Peloton’s Cringe-y Ad Got Everyone Talking. Its C.E.O. Is Silent. But the “Deadpool” star Ryan Reynolds describes how he found a way into the conversation.

Yahoo: Ryan Reynolds says he hired actress from viral Peloton ad because backlash can be ‘alienating’

Share on FacebookShare on TwitterShare on PinterestShare on LinkedInShare on Email
Posted in Lochhead on Marketing and tagged Legendary Stories/Shits & Giggles, Marketing, Trendjacking