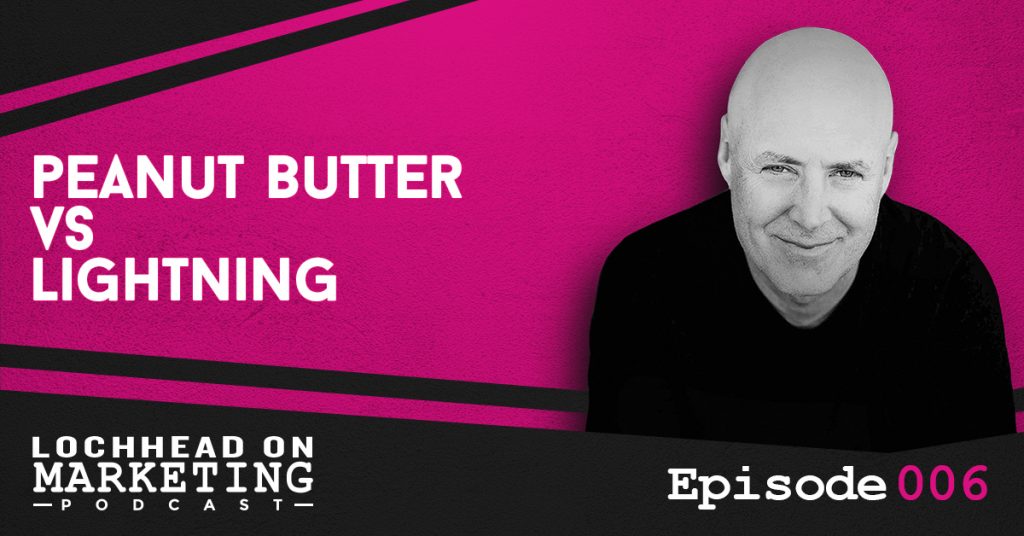 In this episode, Christopher Lochhead looks into the age-old marketing approach of peanut butter marketing and why it is not an applicable strategy in today’s world. Instead, he introduces us to the concept of lightning marketing, as mentioned in his first book “Play Bigger.”

In Lochhead’s book “Play Bigger,” he defined the terms Lightning Strike and Peanut Butter marketing. With the traditional Peanut Butter approach, marketers spread the marketing and PR across all sorts of markets⁠—over a long period of time⁠—with the hopes that somewhere, somewhat, the message would “stick.”

“Peanut butter marketing does not break through in this era of ca-co-pho-nous media and never-ending swarms of new start-ups seeking attention. A lightning strike must overcome the noise.” – Christopher Lochhead

In today’s society⁠—where ads are all over social media, television, radio, and print media⁠—most people consider Peanut Butter marketing as noise. This definitely calls for a different kind of approach, hence, a lightning strike.

“A Lightning Strike is an event meant to explode onto the market, grab the attention of customers, investors, analysts, and media, and make any potential competitors crap their drawers. It is the full concentration of the company’s resources on a high-intensity strike.” – Christopher Lochhead, Play Bigger

Lochhead quotes more information from his book, this time, about ground wars and air wars. Air-wars⁠ is a campaign to change potential customers’ minds so they would consider buying from the company. On the other hand, ground wars refer to more hand-to-hand work such as lead generation, sales, calls, and closing deals.

“Some companies know they need both air wars and ground wars to move their target’s brains so they then move their buying patterns. Lighting strike gets air wars off with a resounding bang. One of the best strikes is to hijack an event⁠—an industry conference or trade show⁠—where a good number of the target audience will be gathered.” – Christopher Lochhead, Play Bigger

It is a Company Event

Lochhead further shares that the most important thing to understand about a lightning strike is: it’s not a marketing event, it’s a company event. It becomes a forcing function for every part of the company.

“Once the work is done to define the category and set up the vision, the lightning strike is meant to show the world that the category and vision are real, imminent, and inevitable.” – Christopher Lochhead

He gives further advise on strategies when to best employ the lightning strike approach.

To hear more about Peanut Butter vs. Lightning and more relevant information from Christopher Lochhead, download and listen to the episode.

In addition, he served as a chief marketing officer of software juggernaut Mercury Interactive ⁠— which was acquired by Hewlett-Packard in 2006 for $4.5 billion.