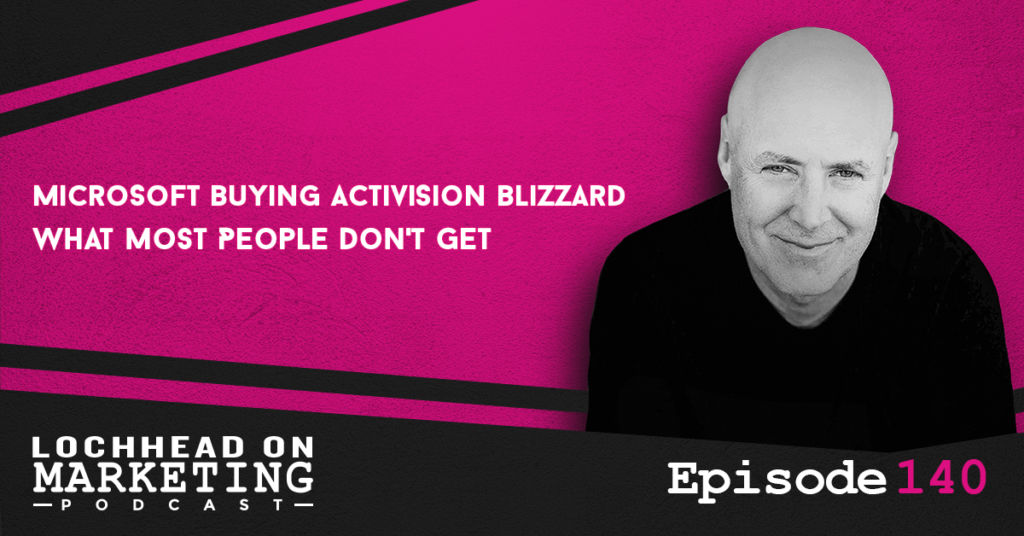 This episode is based on some of the thinking in the #1 bestseller: The Category Design Toolkit: Beyond Marketing: 15 Frameworks For Creating & Dominating Your Niche

Since Microsoft announced that its purchasing Activision Blizzard for $70 billion, a lot of people have called this stupid. Others said Microsoft overpaid, and other various things. So on this episode of Lochhead on Marketing, let’s break down why this acquisition is actually a legendary move and examine the difference between acceleration deals in growing categories, and consolidation deals in slow growth to declining categories.

Let’s also look at Microsoft buying Activision Blizzard from the future, as opposed to from the present.

Did Microsoft Overpay for Activision Blizzard?

Most people think that Microsoft overpaid with the $70 billion price tag on Activision Blizzard. Not necessarily.

People tend to look at this as a consolidation deal, where Microsoft buying a company at a decline, which is not. The important point of the deal was to facilitate Category Acceleration. The goal of this deal or purchase is to buy a leading position in a category with a massive future potential. They are not buying people, products, customers, or even the revenue; they’re buying a dominant position in a category with massive growth potential going forward.

These types of deals are often employed by Category Designers that are actively pursuing the next Category King. A practice that Satya Nadella, the CEO of Microsoft, seems to be well aware of.

The Big Play for the Metaverse

So why did Microsoft purchase Activision Blizzard?

Simply put, Microsoft is making a huge bet on the new Metaverse. For them, the gaming category will be the gateway into getting a solid foothold in the metaverse. Here’s what Satya Nadella has said on the matter:

“Gaming is the most dynamic and exciting category in entertainment across all platforms today, and will play a key role in the development of Metaverse platforms”

In 2020, the online gaming category in the US reached a peak of 166 billion. Why is that? Well, it’s because of the 140 million Native Digitals in the US alone, 70% of which identify as gamers. Digital Gaming has been a booming business lately that it has far outstripped Hollywood. Also, there are now colleges and universities that offer scholarships to a new category of athletes who play eSports.

Getting a Head Start on the Metaverse

You all probably know about the Metaverse by now, and watched the bizarre presentation that Mark Zuckerberg did. In that presentation, he said Facebook is investing 10 billion on the Metaverse. Microsoft just one-upped them and did 70 billion.

Consider this as well: aside from Facebook, most of Meta’s category-defining products and services were not internal projects. Their key brands and properties were startups that they have acquired once the category has proven successful and already dominate as Category Kings.

In terms of the Metaverse, Meta might be on to something. Unfortunately, it will take a lot of time to develop and visualize what they want their metaverse to be like. Microsoft, by buying Activision Blizzard, sort of stole the march from them and established an initial goal for their idea of the metaverse, and an existing system to implement it on. In other words, this deal suddenly puts Microsoft in the pole position and the driver’s seat.

To hear more about Microsoft buying Activision Blizzard and why it all makes sense, download and listen to this episode.