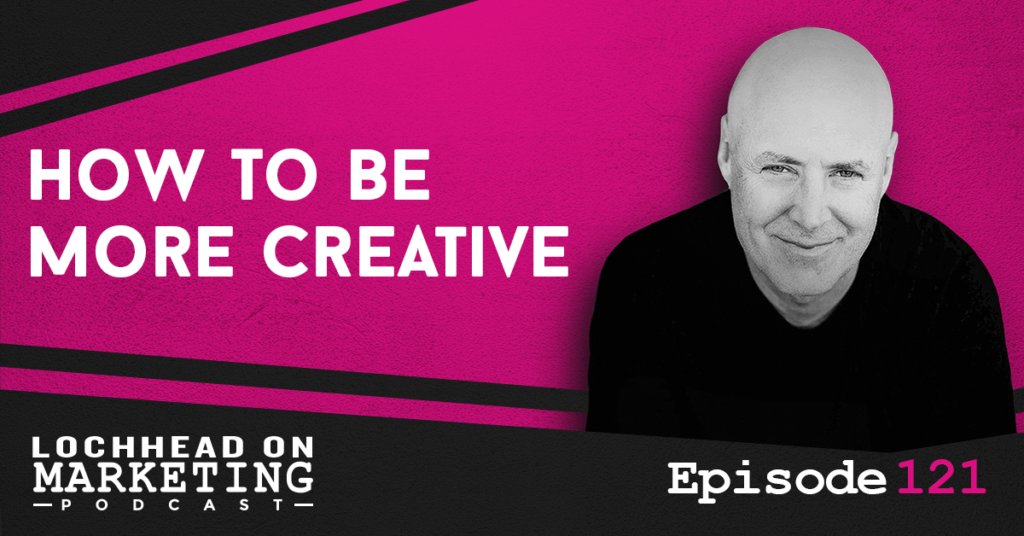 In this episode of Lochhead on Marketing, let’s talk about how to be more creative and two beats ahead of the rest.

I’ve been inspired of late by a new book called Two Beats Ahead by Panos Panay and Michael Hendrix. What I love about this book is these guys are musicians who teach entrepreneurship and how to have an entrepreneurial mind in the musical world, so to speak. This book is about how to take some of the big creating learnings from some of the greatest music artists in the world and apply them in a business context.

If you want to hear more from them, check out this episode of Follow Your Different (FYD episode 218) or get Two Beats Ahead here.

Though for this one, I wanted to focus on the ideas that have been rattling around in my head and in my conversations with marketers and entrepreneurs. So if you want to hear more about it, stay tuned to this episode.

If you haven’t listened to our conversation at Follow Your Different, you are really missing out. Panos Panay and Michael Hendrix are amazing people, and our conversation about the book and their thoughts on business is legendary.

One of the things we talked about in the books is that they ask a question. When they do workshops, they ask the CEOs, “who would you rather hire, an athlete or a musician?” I thought this was an interesting question, because musicians, particularly ones that write their own music, usually have a high degree of creativity.

There are three big ideas I wanted you to take away from how I’ve been taking the learnings from Michael and Panos.

The first comes from a quote from Justin Timberlake in the book: “ I only have one rule in the studio, and that’s this: dare to suck.”

I think when many of us are in business jam sessions, whether we are thinking about products or marketing campaigns or new business models and whatnot, we’re in some kind of jam session with a group of people. Our objective is to do some thinking out loud and be creative. Though what tends to happen in these sessions is not about being creative, innovative, and coming up with legendary ideas. It can often be sort of about posturing, looking good, currying favor with the boss, or something along those lines.

I think it’s best to not worry about those things and dare to suck. Let ourselves be free and be open. Don’t worry about what we look and take Justin’s advice: Dare to suck.

As you read through the book, it is painfully obvious that legendary musicians collaborate in a way that is unusual, to say the least. Here’s a quote from the book:

“The company that operates more like a band of collaborators than a strict corporate hierarchy has the ability to shape an environment where everyone feels a sense of belonging.” – Two Beats Ahead

As someone who collaborates with two highly creative people in Category Pirates, having a highly intense and creative environment multiple times a week as we work on the newsletter has been an amazing experience. When you have a group of people who are committed to doing legendary work, who are willing to suck, and willing to jam with each other like a band would, it can be quite rewarding for everyone involved.

The opportunity to be playful and truly collaborative and not give a shit about sucking or how we look is a very freeing thing in business.

One of the things mentioned in the book is that musicians just keep creating. When they get into a creative zone, they just keep going and not worry about editing it. The time for editing comes later.

I think that’s remarkable as when you think about it, when you have a creative jam session in business, a lot of the time is spent on editing rather than creating. Whenever someone comes up with a new idea, it’s either immediately criticized or shut down. It’s rare that an idea is allowed to be built up by the person who mentioned it or someone else in the session.

So the AHA here is just let the creating keep happening, play a game called “What’s Possible”. I also ask questions like, “If we were legendary, what would we do here?”, or “If we were smart and we were us, what might we do here?” Because we’re definitely us.

Another question I love is what are the headwinds and tailwinds, and how do we harness both to our great advantage?

That said, the main point is to not edit: just keep creating. We over edit and under create in the business world. Let’s be more like legendary musicians and create like crazy and edit later on.

These three takeaways I think are very, very powerful. This book has sort of swiveled around in my head and let me play with these ideas. Hopefully you take a look at the book and have your own takeaways on it as well.