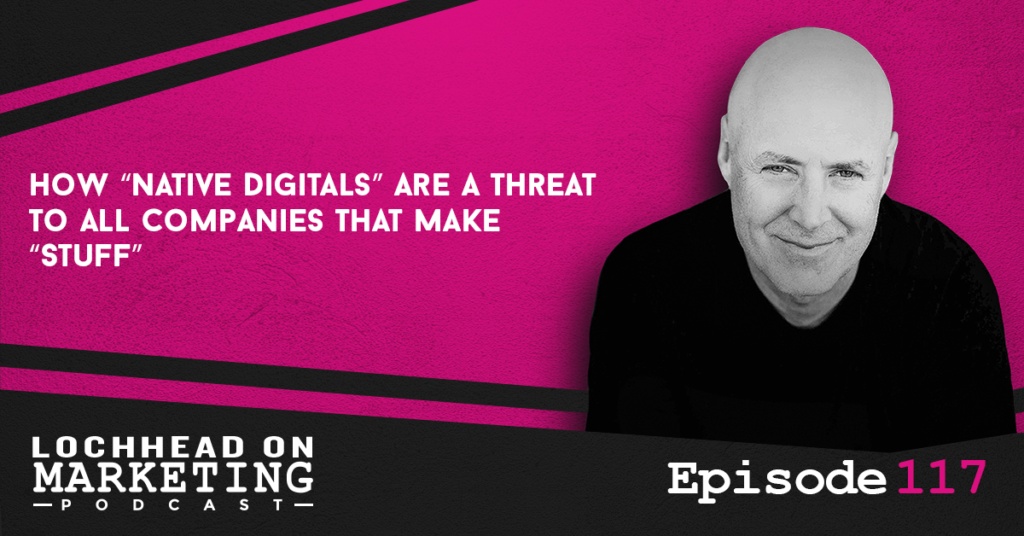 This episode is based on the Category Pirates

Welcome to a two-part series of Lochhead on Marketing, where we talk about Native Digitals and the profound changes they are bringing to the way we live, work, and play. If you haven’t heard the first episode, why not check it out so you’ll have an idea of what’s going on with Native Digitals.

To recap, there are about 140 million Native Digitals in the United States, and we are witnessing a new category of human beings emerge. One that is fully integrated with the technology for whom their digital life is their primary experience of life.

That last bit puts companies that make “stuff” in a lot of trouble, because it turns out that most Native Digitals don’t want their “stuff” anymore. Which might put a serious dent on the economy, as roughly 30% of the U.S. GDP is in the “stuff” business. Stay tuned to learn more on how they are affected, and how they can adapt to this new market situation.

What Native Digitals Think of “Stuff”

Most millennials and Gen Z are what we call Native Digitals. They grew up in an era where they have observed that their parent’s pursuit of “stuff” did not really lead to as much meaning as they would’ve thought. Suddenly, getting a big house, driving a sports car, and having a lot of trinkets and expensive jewelry doesn’t seem like a priority anymore.

This might be the reason why 74 percent of Americans now value experiences more than physical products. At the very least, the majority of millennials feel that way. Virtual products are now selling for more than their analog counterparts.

This might sound stupid to most people who are Digital Analogs, but you have to realize that their primary experience and interactions are those in the digital space. An example of this is NFTs, which are Non-Fungible Tokens that certain digital artworks now use as a badge of authenticity. Not to mention cryptocurrency, that is slowly creeping into mainstream and becoming a primary “store of value”.

Another reason for the lack of desire for “stuff” is that 70 percent of Millennials aren’t in a financial position to buy a house, even if they wanted to. Which means they don’t have a place to put their “stuff” anyways. Younger generations aren’t even prioritizing getting their licenses, which means less demands for cars and other vehicles. Lastly, Millennials would rather travel and have autonomy in their schedule than land a high-paying job.

If you were a Gen Xer or a Baby Boomer, those statements would have probably driven you into a fit of anger and confusion. What is happening here is the biggest shift in the perceived value of “stuff”. If you’ll remember, nothing, not even human life, has any intrinsic value (LOM #105: Value is 100% Perception).

“Stuff” Companies are in Trouble

Knowing all this, if your company is in the “stuff” business, you might be in a bit of trouble. If you’re company is completely analog and doesn’t offer digital goods or services, you’ll probably be left behind.

This macro trend is happening in plain sight. If your customers are 35 years or younger, they will progressively spend more time, energy, and money enhancing their digital life, themselves, and their careers through products, experiences, and what our friend Joe Pine, author of Experience Economy, calls transformations in your digital life.

So let me say this again. Native Digital people under 35 will progressively spend more time, money, and energy enhancing their lives, their work, their play through digital experiences, products and transformations, not analog ones.

Consequently, it’s starting to look like analog only manufacturers as we know them today will be an ever-decreasing percentage of GDP. Said another way, “stuff”-only categories are going to continue to shrink. Which means that stuff manufacturers need to innovate around digital products, services, experiences and what Joe Pine calls transformations to go along with their physical stuff.

To learn more how analog “stuff” companies can make the shift in this new Digital Native market, download and listen to this episode.

Here are some sources for your perusal:

More than a third of the people in the United States have met their spouse or partner through their digital life first.

Only 10% of first-time brides in their ‘30s and ‘40s received diamond engagement rings.

Native digital women don’t care as much about diamonds.