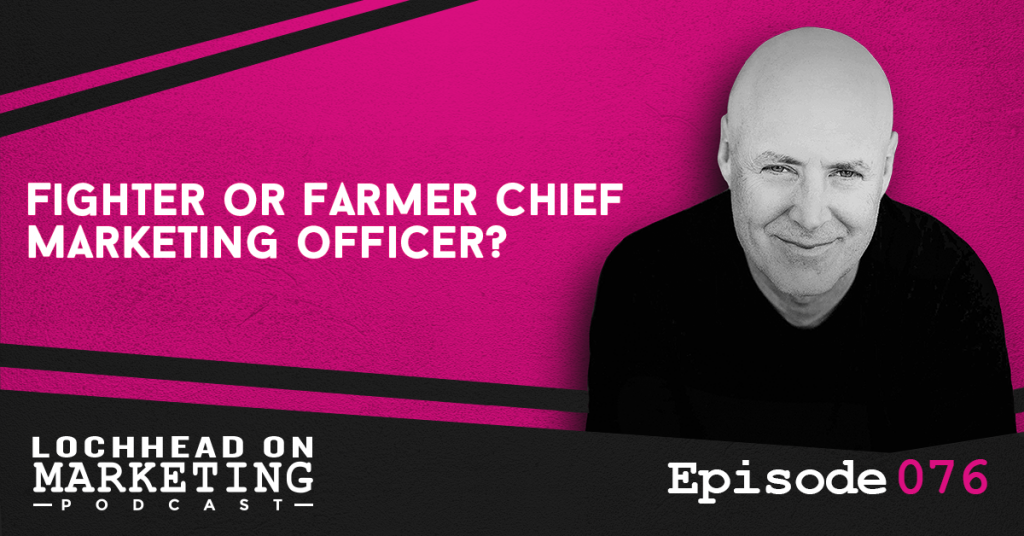 In today’s episode, Christopher Lochhead’s answer addresses a listener question, “what kind of CMO should we hire?” He further discusses what’s the difference between a fighter and a farmer CMO and what you, as a marketer, should keep in mind when you plan to pursue this role.

Get Clear On What You Want

Christopher discusses two things: first, identify the background of the CMO. This is highly specific based on the company and the current stage of the company and its category. Secondly, Christopher points out that it’s very important that the CMO knows who he is, his strengths and weaknesses, and his specific legendary trait.

“What am I legendary at? What am I not? How do I build a team based on that, that multiplies or amplifies where I’m strong and that compensates for my weaknesses?” – Christopher Lochhead

A Fighter Or A Farmer CMO

If you have identified where your company stands, that is the best indicator of whether you should hire a fighter or a farmer CMO. Chris gives a specific discussion on the difference between a fighter and a farmer CMO in this episode.

“What are the skill sets that you think are critical? That’s important, but it’s not maybe as important as a lot of people think. Second, are they self-actualized? Self-aware enough to know where they’re truly strong and truly weak? Do they have the capability to build a team around their strengths and weaknesses? And probably most importantly, are they a fighter, or a farmer?” – Christopher Lochhead

“As a marketer, I think you’d have to decide ‘who am I,’ and again, I don’t think there’s a right answer, but I think you should know. The worst thing you can do as a CMO, or a wannabe CMO is go take a farmer job in a place that requires a fighter or vice versa.” – Christopher Lochhead

To know more about what is a fighter or a farmer CMO, download and listen to this episode.