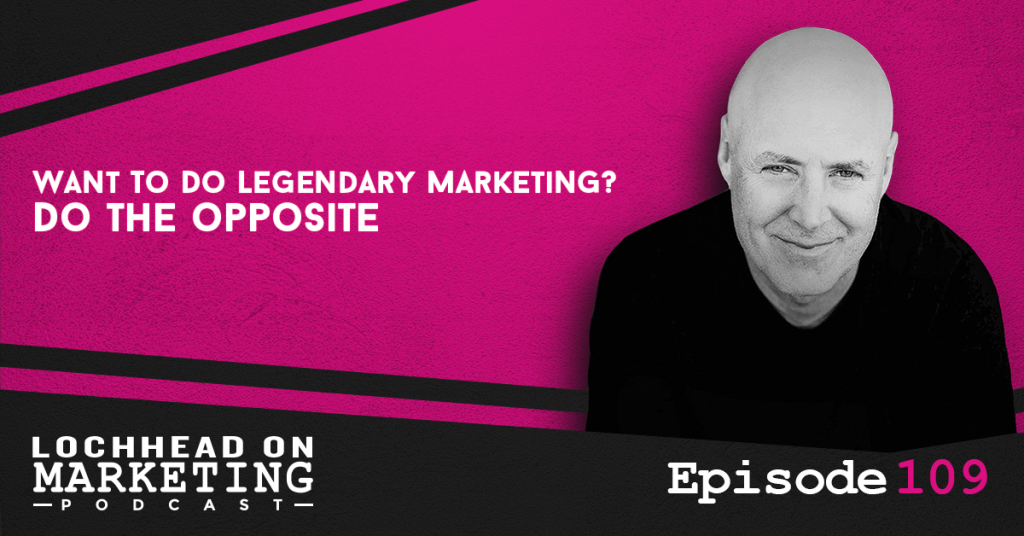 In this episode of Lochhead on Marketing, let’s talk about how to stand out. In many ways, if you want to do legendary marketing, you need to do what the opposite of what most people do.

As part of the mega category people refer to as Creators, there was something that we’ve noticed:

People spend a lot of time telling other people how awesome they are.

When you start looking at creator marketing, what you’ll see is a lot of creators just touting their best achievements and how great they are. Ergo, you should consume the content they create so you can share in his glory, or something.

So what did we do? First of all, we do very little paid advertising. Recently, our friends at Podcast Magazine ran their annual edition that has a directory of all the top podcasts. What we did was buy a full-page ad in it. Though rather than your usual positive reviews and highlights, we ran it featuring negative reviews.

“We ran an ad featuring negative reviews: “Off-putting to some” from The Economist and The Fall. “Annoying host uses profanity needlessly”, and “Very disappointing”. So imagine a photo of myself with those big headlines next to me.” – Christopher Lochhead

John Bielenberg talks about how he’s always looking for the dog with the red hat. In other words, he’s looking for ways in order to stand out.

At a time where people are bombarded with information from all sides, people have learned to tune things out. So if they see something that’s pretty much the same as any other information they’ve seen before, they pay less attention to it.

Yet if something different suddenly comes along, say a dog with a red hat, you’d immediately notice it. Because it’s new and it’s not something you see every day.

So I would encourage people to do the opposite of everyone else and stand out amongst the crowd.

Things that Drive Us

If you’re not convinced or still wondering why we did all this, here are seven key things that were driving us… sort of.

We share that story with you to encourage you to think in broad and unconventional ways before you’re going to take on any marketing or advertising.

Ask yourself: “what’s the opposite of what everyone else would do here? What’s provocative? What’s funny?”  You ask yourself, “what is everybody in our industry doing? What is the exact opposite of that?”

You don’t have to do exactly the opposite. Just map it out and see what others are not doing, and eventually new ideas will probably emerge. As you’re looking for those new ideas, start with what’s the opposite. Do what John Bielenberg suggests, and go find your dog with a red hat.