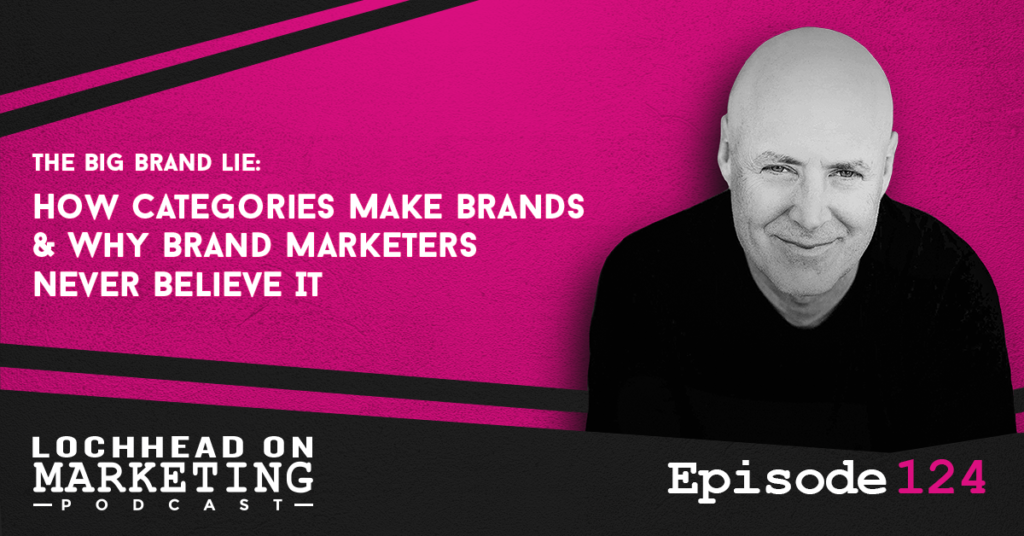 Welcome to a very special episode of Lochhead on Marketing. This episode is based on a recent Category Pirates newsletter that we wrote, which was about Big Brand Marketing and why it doesn’t work.

It is also available as a mini eBook here.

Think of this episode as more of an audiobook than a podcast, as I will be reading the article for you. Without further ado, let’s get to reading.

A meaningful percentage of marketers, entrepreneurs, and executives are in what we like to call “The Brand Cult.” They’ve been taught the best (aka: “the most well known”) brand wins.

Even though the data shows this is not true.

Though sharing data with a cult member is about the worst thing you can do. That’s because facts are upsetting to feelings—particularly facts that disprove everything you’ve been taught to believe.

Categories make brands. Not the other way around.

How The Brand Cult Began

In 2011, The Atlantic published a piece titled, “How Brands Were Born: A Brief History of Modern Marketing.”

“In the 1950s, consumer packaged goods companies like Procter and Gamble, General Foods and Unilever developed the discipline of brand management, or marketing as we know it today, when they noticed the quality levels of products being offered by competitors around them improve. A brand manager would be responsible for giving a product an identity that distinguished it from nearly indistinguishable competitors.”

From our perspective, the obvious response and clear “no brainer” solution to being “nearly indistinguishable” is to get different: design a new space, come up with something new, and make others play a game you created.

But that’s not what most “marketing & branding experts” decided.

Instead, they said, “Let’s ignore the fact there is nothing unique about us, our product, or what we do for the world. Instead, let’s do some branding.” As if sprinkling some kind of magic dust on your “brand” (changing the colors, the font, the logo design, etc.) is going to drive a breakthrough in growth. Or, even worse, “Let’s call ourselves a community. Let’s use big, all-encompassing, undifferentiated language to make ourselves appeal to everyone. Something like, ‘We are an authentic, purpose-driven brand.’”

If you’d like to hear the rest of the article, download and listen to this episode. You can also check it out at Category Pirates. Who knows, you might find that you have a little pirate in you as well. ?‍☠️