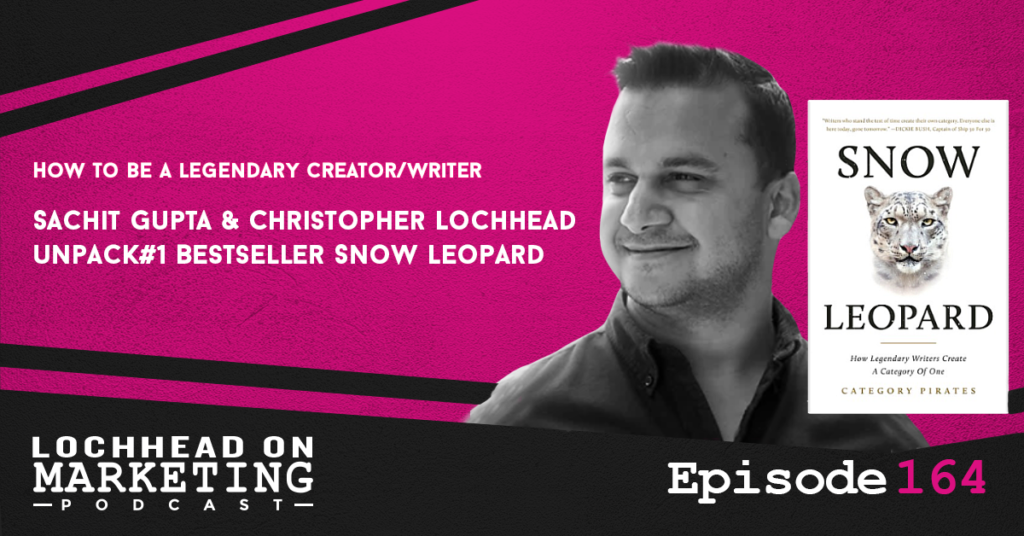 Recently, I was a guest with the legendary Sachit Gupta on his fantastic podcast called Conscious Creators, which I highly recommend. During our conversation on his podcast, we unpack Category Pirates’ most recent book Snow Leopard. Our producer Jason DeFilippo heard this podcast and thought it’d be a great idea to drop it here for you.

What you’re about to hear is me and Satya go deep on what it takes to be a successful native digital creator slash writer.

The Reason for Podcasting

The conversation starts off with a discussion of how the two first met, and it was through the legendary podcaster Jordan Harbinger. Christopher was looking into getting sponsors and thinking about was to monetize his podcast, and was recommended to Sachit Gupta this way.

While he did get ideas on different styles of monetization, the biggest thing that Christopher got out of the conversation was the realization that monetization was not his primary focus on doing podcasts.

“I sort of had this aha that said, “Hey, wait a minute, dude, this was actually never about money”. And if I want to make money, I know how to go do that. So you sort of set my head straight, and that the emphasis was on the wrong syllable that if I wanted to make money, I knew how to go make money in a way that was much more exponential than being essentially an ad salesperson.

The real gift you gave me around podcasting, was that I’m not doing this to monetize.”

One of the things that Sachit wanted to share was that one doesn’t have to monetize directly. Focus on making good content first and foremost, so that you can reach out and cultivate an audience naturally, rather than going for cookie-cutter approaches for a short-term viral status.

“Here’s what I see happening in this greater world right now: there’s a stat that I think like 75% of youngsters want to be YouTubers, and the path most of them see in front of them is go on YouTube or something else and create content that’s for the extremes, because that’s what spreads. And then once you chase views and get to a certain level of audience, you can monetize in some way, right. And if you don’t become big, you can’t monetize. In your book, you call like the obvious content, which is not really the stuff that’s useful.”

While there is merit to uploading consistent content, you don’t have to flood your audience with bit-sized content that is just a big nothing burger. Creating meaningful content, let’s say once every week or two is way better than just dropping portion-sized content that just adds to the collective brain-rot of society.

The topic then shifts to the concept of the content pyramid, and what types of people thrive in each level.

Consumers, for example, are at base of the pyramid and consists of the largest section of it. In internet culture, there is something known as the 1% rule, which states that on social media platforms, 1% create while 99% consume.

Most people spend their entire lives being content consumers—not content creators. And that’s totally fine, so long as you understand you’re not “playing the game.” You’re sitting on the sidelines watching the game.

In order to “get in the game,” you must move out of consumption and up The Content Pyramid.

To hear more of the conversation between Sachit Gupta and Christopher Lochhead, download and listen to this episode.

Share on FacebookShare on TwitterShare on PinterestShare on LinkedInShare on Email
Posted in Lochhead on Marketing and tagged Entrepreneurship, Life Design