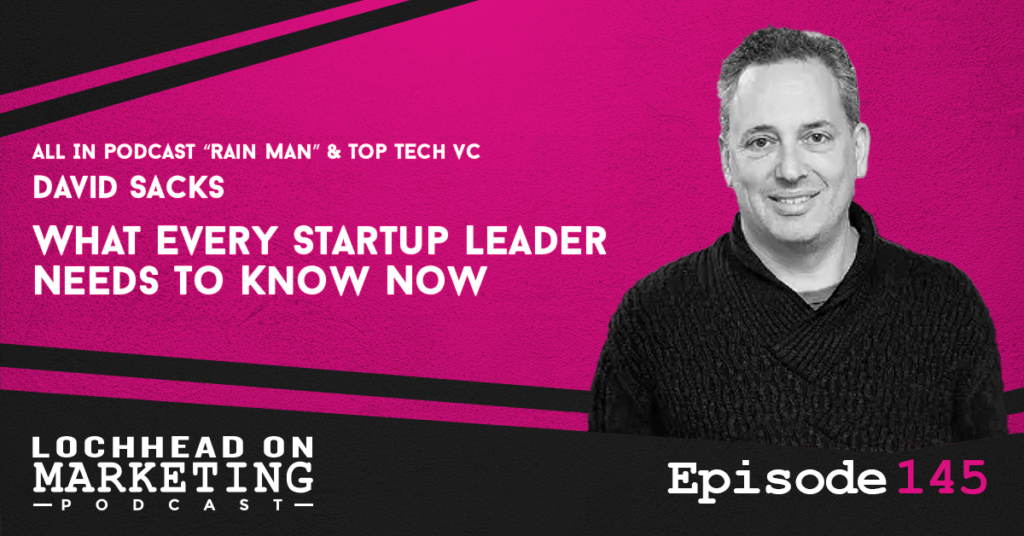 On this episode, we talk to David Sacks of Craft Ventures, on what every startup leader needs to know in the current business landscape.

If you didn’t know, I recently talked with David Sacks about a variety of topics, including business, current affairs, and how the two are interconnected. Even when we don’t always see it. If you want to check that out, go to Follow Your Different episode 267. This episode is a certain portion of that, which I thought bears highlighting here on Lochhead on Marketing. So listen up, and listen good.

How 2022 will play out for VCs and Startups

The conversation starts on how 2021 was for venture capitalists and startups, which saw great growth on new businesses and new deals. Though the question that remains, according to David Sacks, is how sustainable it will be.

He notes that the huge growth was caused by certain situations in 2021, and how the public market reacted to it. But it seems that the market is slowly correcting itself, so we might expect to see a “slump” this year.

“Well, it’s gonna be very different than 2021, for sure. There’s a HUGE CORRECTION that’s been underway really since November, the public markets started correcting in November.” – David Sacks

Part of the huge growth was that there was an enormous liquidity injected into the markets as a result of the government reacting to COVID to act as a stimulus for the economy. The issue lies on the fact that they seem to have overdone it. To correct it, the market has seen inflation rise to new heights over the past months. It will seem erratic for now, but as the demand goes back and the excess stimulus wears off, we will see the market stabilize once more.

One of the things that you often see during this time of sudden rise and slump in the market, is that a lot of acquisitions and mergers happen. It is because company’s valuation tends to drop during this time, so you could probably acquire one for far lower its original, especially compared to the high-rise last year.

One example is Salesforce, who acquired Slack on the height of the market boom last year. If they were to buy it at this current market, they might have gotten it for about 75% or less of what they originally paid for.

That goes for everybody. On paper, this should be the best time to acquire or merge with new assets. Yet that’s not what always happens because…

On the other hand, it can be hard to get a lot of deals happening because they are still clinging onto the prices of the past.

“One of the reasons why there’s not a lot of deals happening right now is because in VC land is because prices are kind of sticky. I mean, all the founders remember the glory days, just six months ago, 100 times ARR. They’re still anchored on that. And they don’t believe that, like, there’s been this giant repricing, and that things could really be at 20 times ARR.” – David Sacks

They cling to this because most of them know that all they need is just one VC that is still willing to drink the Kool Aid and pay for 100 ARR, and they’re all set. So there’s going to be resistance to these changes and price levels.

To hear more from David Sacks and know what most startups need to know now, download and listen to this episode.