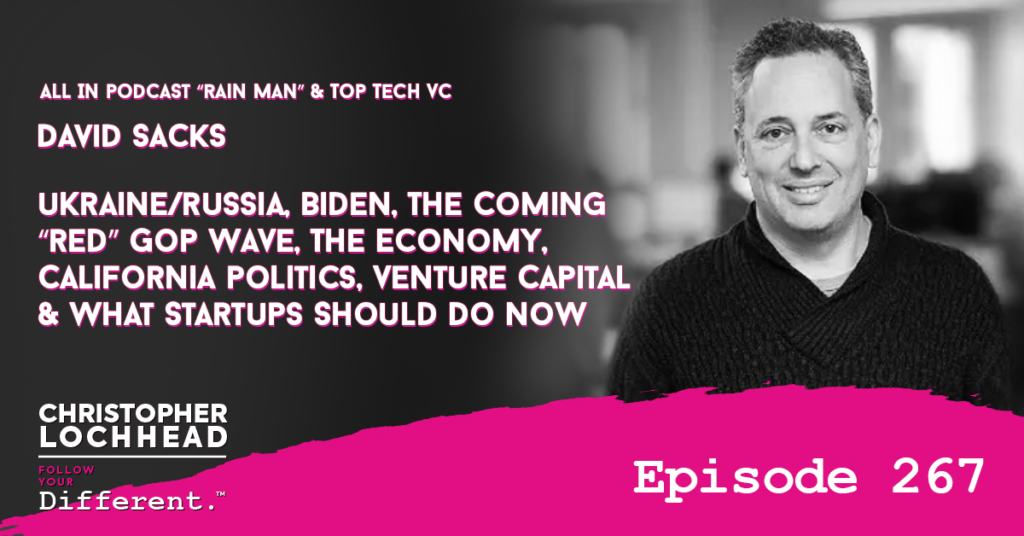 On this episode of Christopher Lochhead: Follow Your Different, we continue our focus on the current situation in the world and in the United States. Because in times of great change and great uncertainty, we turn to great, though in some cases, counterintuitive minds. Today, we talk to one of the great minds of today, David Sacks.

David Sacks is a legendary entrepreneur, category, and company builder – and now, venture capitalist. He is the founder of Craft Ventures. In Silicon Valley, David is a living legend. You see, he was the co-founding CEO of Paypal, founder and CEO of Yammer, which sold to Microsoft for over a billion dollars. He has been an early investor and advisor to companies like Facebook, Twitter, Uber, SpaceX, Airbnb, Slack, and so much more. He’s also co-hosting an amazing podcast called All In, which has become one of the most popular dialogue podcasts in the world.

So if you want to listen to the thoughts of this legendary individual, stay tuned to this episode. If you want to check out our past dialogues with David Sacks, you can check them out here.

David Sacks Goes All In

The conversation starts off with what’s new with David, particularly, his relatively-new podcast. David explains that it started out as a conversation pod with his “besties”. It was something they did to pass the time during COVID. Little did they know, it would grow into what it is today.

“It’s been kind of a surprise. We started doing it at the beginning of COVID when we were all trapped in our houses and had nothing else to do. So it’s me and three friends, the four besties as we ironically say, and yeah, we’ve been doing this weekly pod. Amazingly, it’s climbed the charts. I think the new episodes tend to be in the top 30 or 40 podcasts. And it’s done really well.” – David Sacks

David shares that at first, they tried to focus on talking business and markets, as well as private investing in VC. But there was only so much you could talk about that without circling back on itself. So they eventually started talking about current events, politics and world affairs, and how it can affect the world of business.

Having a Healthy Conversation

David muses that what makes them different from other business and marketing podcasts, except for their discussion on current affairs, is that they get to have a healthy conversation. Unlike your typical podcast that has the host and maybe one or two guests to discuss a certain topic, the four of them talk it out amongst themselves, and sometimes even lead to heated discussions. Because it’s not simply an echo chamber, it’s a place where ideas are presented, and confirmed or challenged by the other hosts.

“One of the things people say they like about it is the fact that we can get into debates, vigorous debates about politics, and yet we’re all still friends. There’s that vibe to it. But there’s also people on the show breaking each other’s balls, that kind of stuff. And they like that vibe, too.” – David Sacks

Since it’s the same four people having the conversation each week, each episode feels like a continuation of the last. Which makes you want to listen to it and look forward to the next.

David Sacks on the War in Ukraine

When asked about his thoughts on the current situation in Ukraine, David responds that it can be difficult to say what exactly is happening at a particular time. Despite technology giving us easier access to information, there is just too much conflicting information being touted around.

That said, he felt that some US media is escalating the current situation to the point that as if we are already at the brink of World War III. As a man who preaches for peace rather than an escalation of conflict, David hopes that our politicians and leaders steer clear of the war and help pursue for peace in the region.

To hear more on David Sacks and his thoughts on the current affairs of the world, download and listen to this episode.