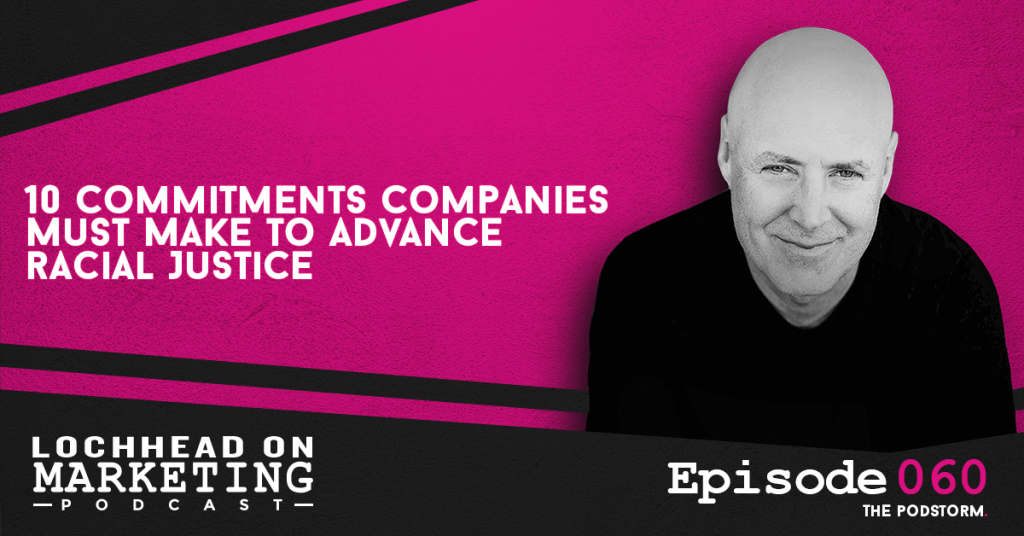 In this episode, let’s take a look at Mark R. Kramers’s article for Harvard Business Review article entitled The 10 commitments companies must make to advance racial justice. Mark is a senior lecturer at Harvard University.

Although Christopher does not agree with Mark’s article in its entirety, he believes these are very powerful ideas worth discussing and advancing inside our companies. Frankly, these commitments should be a must for all business people.

Racial Justice On a Marketing Podcast?

Mark’s list is fascinating and you might be asking why are we discussing this on Lochhead on Marketing. Aside from the fact that its a timely discussion, on a marketing perspective, Christopher believes marketing plays a huge part in creating a culture.

“It’s hard to succeed in the marketplace when you go to market a shitty product. it’s impossible to have legendary internal marketing and communications built on shitty products and policies. Additionally, we are living at a time of mass scrutiny, your category brand and therefore ultimately your revenue will suffer if you’re not viewed as being forward on your skis on topics of race, equality, diversity, and the fair treatment of your people.” – Christopher Lochhead

Christopher discusses each of the commitments and cites Mark’s examples, occasionally adding his thoughts, inputs,and views on these matters.

Adopt a no-tolerance-for-racism policy like Franklin Templeton’s, which led to its swift, recent termination of Amy Cooper following her altercation with Christian Cooper,

Studies that show closing the racial pay gap would increase U.S. GDP by 14%, or more than $2 trillion.

3. Commit to giving employees a voice.

Ensure representation of hourly employees, women, and people of color in all employment policy decisions. Consider employee representation on your board — it’s a legal requirement in Germany and is one reason why its economy recovered more strongly from the Great Recession than America

“Mark advocates making election day, a paid day off. He’s right. I’m generally no fan of more regulations for business but I’ll go a step further and say, States should mandate election day as a day off, with pay.  if an employee wants to vote BEFORE election day, they should be given any day in November off to vote.” – Christopher Lochhead

5. Commit to lobbying for good.

“Mark says, commit at least 50% of your lobbying expenditures to support bills that improve conditions for communities of color I think this is a cool idea and I also think there are a lot of important causes.” – Christopher Lochhead

6. Commit to paying a living wage.

“The national minimum wage hasn’t been raised in a decade and has not nearly kept up with inflation. This has had a disproportionately negative impact on Black workers, Mark points to research that shows States that have raised minimum wages to $15 an hour have seen their economies grow and thrive. Further, he points to Research that shows that the companies that pay well and offer good benefits and treat their hourly employees with respect are more profitable. Walmart raised entry-level worker wages to $12 an hour and saw productivity rise while turnover fell, generating a net increase in corporate earnings.” – Christopher Lochhead

“Most women of color cannot afford to take significant periods of unpaid leave from their jobs when they have a child.” – Christopher Lochhead

He cites research that shows that Corporations spend twice as much providing employees with health care as they pay in taxes. He argues, that it puts U.S; businesses at a massive global competitive disadvantage, Mark argues, that supporting national health care coverage that would reduce the burden on corporations and ensure that those without insurance — many of them people of color — are covered.

“Here is what I know, tying health care to employment is insane for both employees & employers I know small E entrepreneurs, who’ve been driven out of business because of health care costs and I’ve known many want-trepreneurs, who are afraid to start a company because they can’t afford to lose health care this is mental. it is time to de-couple employment and healthcare.” – Christopher Lochhead

Nearly 40% of Americans — disproportionately people of color — lack the savings to cover even a $400 emergency expense.

Eliminate the box for “felony conviction” on job application forms, which disproportionately excludes people of color. Eliminate testing for marijuana use and other drugs if not required by law or the nature of the job. Join the companies such as EY, Google, and Whole Foods that no longer require a college degree for jobs that do not actually need higher education.

To know more about 10 commitments companies must make, download and listen to this episode.

Share on FacebookShare on TwitterShare on PinterestShare on LinkedInShare on Email
Posted in Lochhead on Marketing and tagged Leadership, Marketing PodStorm