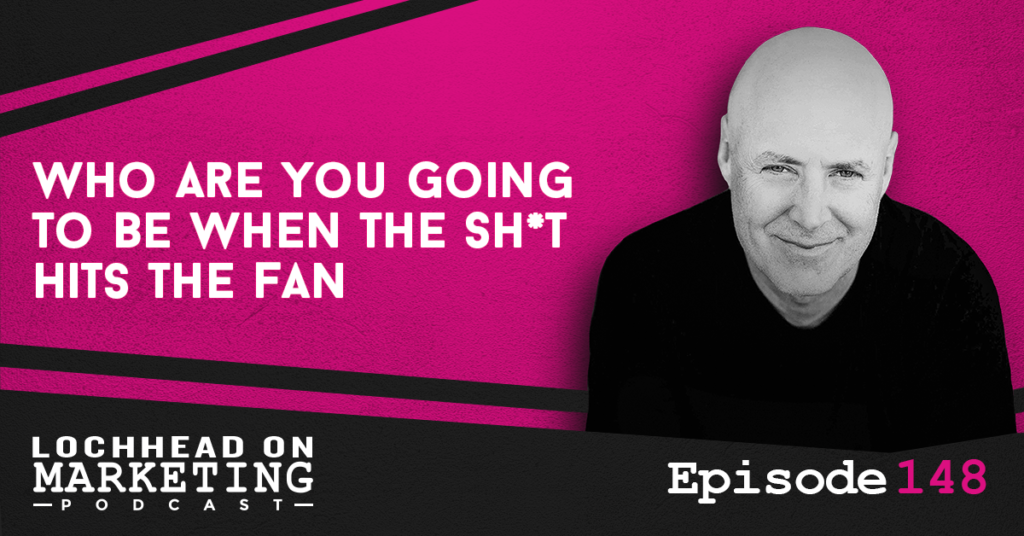 On this episode of Lochhead on Marketing, let’s talk about a critical question: Who are you going to be when the shit hits the fan?

As we have talked about in previous episodes, it is starting to look like the business environment could get very hard here. Some people in Silicon Valley are even saying that it could be like back in 2008. Sequoia Capital wrote their seminal “RIP, Good Times” presentation, and its final slide says, “Get real, or go home”. No matter what’s going to happen next in the economy, or frankly, the world, it’s probably time for all of us to get real or go home.

So let’s dig into why some people step up, and others melt down in times of crisis.

When I was in my late 20s, and into my early 30s, I was the founding CMO of a company called Scient. We were a leader in the we called E-business Innovation Space, we were one of the very first consulting firms to focus on building E-businesses or Digital Businesses. We did incredibly well, as a matter of fact, the company was founded, I believe, in 98, maybe late 97. By 2000, we had grown to almost 3000 people, which is incredible for a consulting startup, essentially. We were public and had a market cap of about $9 billion.

Now, if you were around back then, you’ve done your homework, and you know the.com bust happened. Like all bad things, they happen over time. It built starting by about February, March, we could feel things starting to get bad.

Shortly thereafter, we could feel the rumblings our pipeline wasn’t starting to look very good. There was weird shit happening with our customers. And there was a slow takedown that happened from about March, slowly, slowly, slowly, building over the summer, and by the fall, we were in a freefall.

Due to all that, we had to do the first ever layoff in the history of the company. It was insanely painful.

So when we announced the miss in the projected stocks, we do the layoff. The people we laid off are amazing. They were cheering the company on saying please go forward and be successful sign had an incredible culture. So as painful as it was, the exiting people were, were incredible warriors and supporters. And the people who stayed really wanted to make a go of it.

However, people at management seemed to be focusing on the wrong things, rather than discussing how to move forward, given the resources we still had at the moment. This continued until I left the company, and from there the company continued on its freefall rather than picking itself up and starting anew.

How People React to Disruption

So why do I share that with you? It’s a great example of the shit hitting the fan for a company. In my opinion, an executive team unwilling to deal with the reality of the situation, and unwilling to deal with it with any kind of speed is a bad way to go at it. That’s why I got so mad and took off, and that’s why the CEO of the company fired me. After that, the company vaporized.

To hear more how legendary people react when disruption happens in the market, download and listen to this episode.