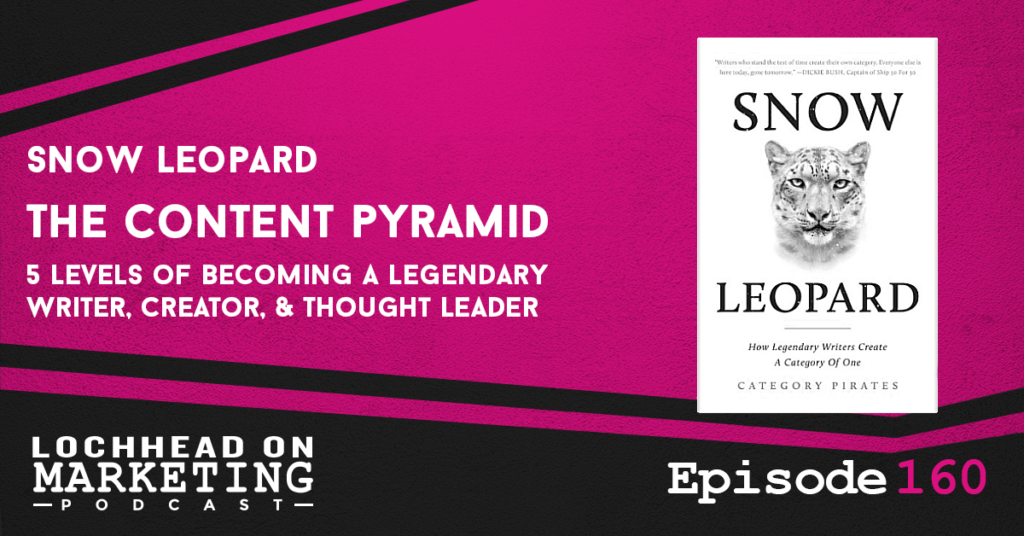 Welcome to a special episode of Lochhead on Marketing, where we dive further into our new book called Snow Leopard. On this episode, we discuss the Content Pyramid, and how one can become a legendary creator, writer, and thought leader.

But before all that, we’d like to say thank you very much to all who took the time to read our new book and share it around. It’s also caused a tremendous amount of conversation in the entrepreneur, marketing, and writer/creator world. Because today, more than ever, being able to change the world with words, matters.

Everybody wants to be a thought leader. They want to be seen as forward thinking, they want to be celebrated as the Guru, the expert, the All Knowing one in their industry, they want to be the keynote speaker, the bestselling author, the person listed in the next 10, marketers to watch in 2002 by Forbes, most of which are paid placements. Because now that the world has gotten exposed to the power of digital attention, and everyone believes the most valuable thing you could possibly have is an audience.

Well, everybody wants one for themselves. Unfortunately, as we wrote about in our mini book, The Me Disease, the vast majority of people who want to be a thought leader, or bestselling author in today’s digital gamified world, don’t have any leading thoughts. That is to say, they’re not actually contributing new differentiated ideas. What they want is to be seen as a thought leader, to collect badges of approval, and amass followers, and social metrics that send the signal that lots of other people say they are important, without having to say anything unique or meaningful, or different. More importantly, they want the audience without having to take the time to think deeply about who they are creating for and why they want the outcome without the process.

Since this has become such a desirable goal, there are now strategies for shortcutting your way to instant status gratification. The key is to cater to the lowest common denominator. The way the business world has been educated on how to become an overnight thought leader is to create content that doesn’t threaten, doesn’t challenge, and doesn’t require the audience to think, as loud and as often as possible. This strategy caters to lazy button smashing consumers.

We call this Content-free Content. It gets likes and views, and it lands you some followers. But after you the consumer, eat it, you sort of feel like a box full of Oreos. Zero nutritional value full of empty calories, and left feeling stupid.

Ask yourself: do you want acceptance, or do you want to make a difference? If you want to be a legendary writer, creator, entrepreneur, executive or industry thought leader, you need to be honest with yourself about a how you measure success and be what category you’re going to play in.

Also, when you create you are creating something for someone. Anyone who says “Yeah, well I just want to create for myself” is a beginner and hasn’t gotten far enough down the road to realize they aren’t who matter: the reader, the listener, the viewer is who matters.

To hear the full chapter about the Content Pyramid and how to become a successful thought leader, download and listen to this episode.