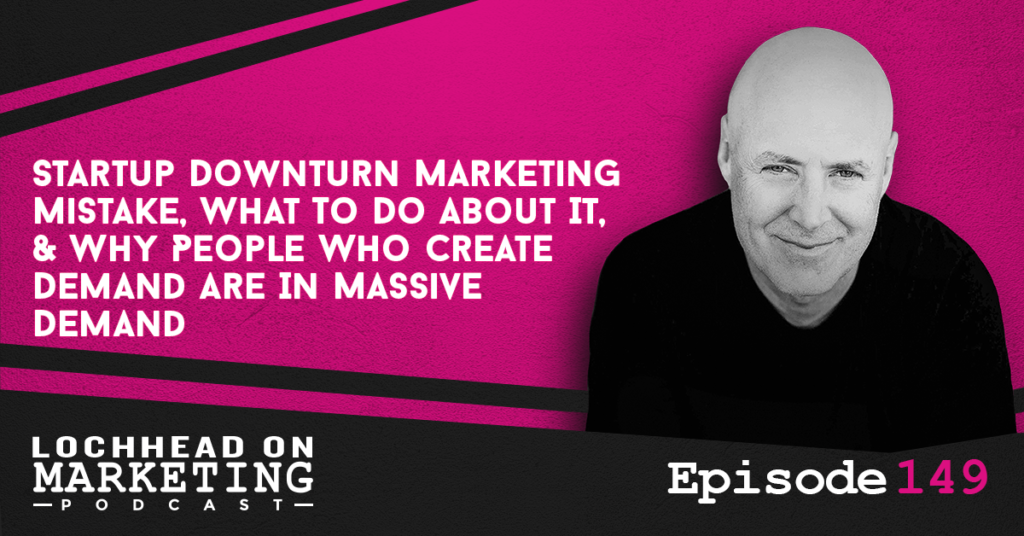 On this episode of Lochhead on Marketing, let’s talk about the big startup downturn marketing mistakes and what to do about it. We also talk about why people who create demand are in massive demand.

Lastly, there is the topic about your career, and what to do when the economy goes sideways, both in your business and in your career.

The reality is, it’s not just startups who make this mistake.

But before that, let’s go through the top 10 list of what happens when the recession hits.

Number one, the recession hits. The immediate impact of that, of course, is number two, demand falls. So what do most companies do? Number three, they market hard in an effort to catch demand.

So when the recession hits to demand falls, three, they market hard to catch, falling demand or some people say catch a falling knife. As a result, number four, customer acquisition costs aka CAC goes up.

Number six to nine is just running around in circles, repeating numbers two to four. Until you reach number ten, where they finally run out of time and money.

Here’s the big learning: He who competes for demand loses, she who creates demand wins. It also happens to be why category design is the most powerful underground skill in business. Most people don’t understand that just like you can create and design a product and accompany you could also create and design a market category.

Recession through a Different Lens

I get into trouble for saying this, but most people immediately assume a negative defensive position in a recession or a downturn. However, approximately 10% of companies get stronger during the recession.

In the last week, I have had many conversations with entrepreneurs and CEOs about how to take advantage of the coming downturn. I know that sounds crazy to a lot of people, but you can’t be in the 10%, that gets stronger, and you can’t be in the elite companies that actually are able to take advantage of a downturn unless you at least ask the questions. So I’m asking you to consider a different way.

So here’s the different way and specific as it relates to shrinking demand. So there’s three kinds of demand. Number one, as we talked about demand capture. Number two, demand creation. That’s why some people call it category creation.

One of the stupid arguments we hear all the time is, “well, category design is dumb, because why would we go to a market where there’s zero demand, and we have to create it all, when we can just catch demand? Okay? She who creates the demand wins. That’s why.

Now in a downturn, here’s the problem. It can take some time to create demand. People say, “well, we don’t have time our revenues falling, we need to generate revenue now.” This is where the third type of approach, wherein we dam the demand. By doing so, you redirect demand from an existing market to a new solution that your product or services provides.

To hear more about how to deal with Startup Downturn Marketing Mistake, download and listen to this episode.