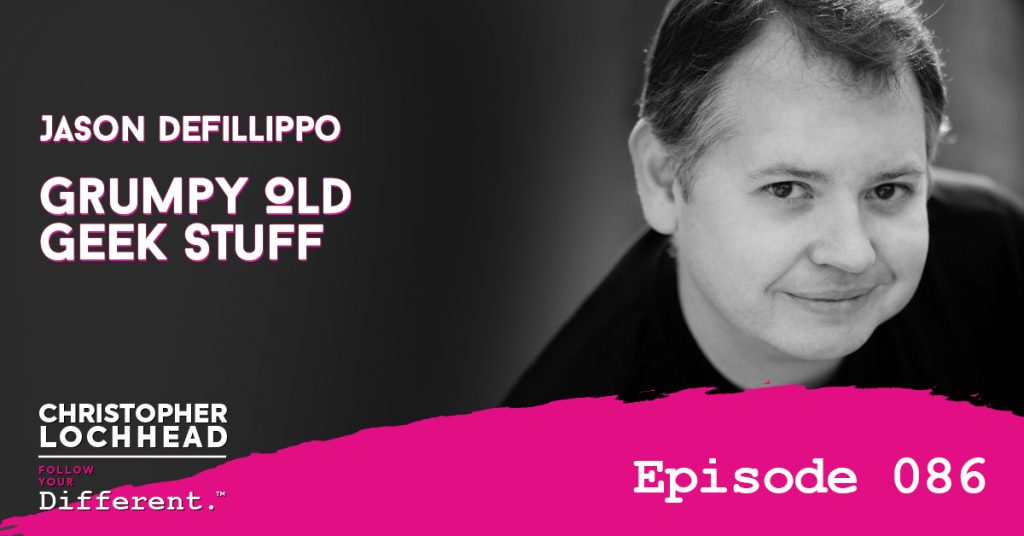 He’s back! Podcast legend and co-host of Grumpy Old Geeks podcast, Jason DeFillippo joins us for another dynamic conversation about the world of podcasting. They also touched a few recent topics about “who should be allowed at Disney World,” “why FaceApp is scarier than Facebook and Instagram” and many more!

In episode 006, Jason DeFillippo joined Christopher Lochhead to discuss a lot of random but viral topics. In this episode, DeFillippo did not disappoint as he shared his views on a lot of topics, firstly, about podcasting.

“Those people are like you and I, we stick around and we get through the tough times. We’re not here to make a quick buck. We’re not here to turn a profit on 10 episodes or 6 episodes, on an iPhone on a library. You gotta put in the work.” – Jason DeFillippo

DeFillippo shared his comments about news writers who dub podcasting as dead. In unison, Lochhead shared statistics to prove that podcasting is, indeed, growing. They exchanged stories as hosts, such as their experiences with booking and rejecting guests and advertisers.

“I’m a craftsman, I’m an artist. I love to make new things. I love to try new things, that’s why I love podcasting. There’s always something new to learn but people who come into this, all they want to do is make money and that’s almost everybody that’s coming in now.” – Jason DeFillippo

Viral Issues: Where do you stand?

For a breather, Lochhead cites some viral stories and takes the standpoint of DeFillippo.

Lochhead cites the Disney rant — where a mom’s rant about long queues and childless millennials in Disney World, goes viral. They also discussed Apple’s Siri recordings apparently sent out to contractors for analysis. DeFillippo believes it will not hurt the company in any way, just like how Facebook stock prices rose up after paying fines to the government.

In relation to Security threats raised by Morgan Wright in Episode 84, about deep fakes and Russian FaceApp, DeFillippo brushed these events aside.

“Who cares? This is useless data. These photos? They could get that in the internet already. They care about a lot of other things, but a picture of you? No, ‘cause they’re looking at numbers. They care about your behavior and your demographics and how they can influence you.” – Jason DeFillippo

Moreover, Lochhead and DeFillippo discussed more recent top stories such as Equifax paying $125 for filling up a simple form and for bizarre stories, about a woman cuddling a giant pet snail. They sure did had fun having a rundown on these top and viral stories.

To hear more about podcasting, viral stories and more relevant information from Jason, download and listen to the episode.

In 1994 he created the groundbreaking website Spewww which was nominated for a Webby in the first year the awards were held in 1998.

Since then Jason has launched over 250 websites for major corporations like Paramount Pictures, Sony, Warner Brothers, and Disney.

He has worked at several startups in San Francisco including Technorati and 8020 Media, the publishers of JPGMagazine.com, and statistical aggregator Metricly.

Have We Hit Peak Podcast?

Childless millennials have no place at Disney World and should be banned, tired mom rants

‘Deepfakes’ Trigger a Race to Fight Manipulated Photos and Videos

Share on FacebookShare on TwitterShare on PinterestShare on LinkedInShare on Email
Posted in Follow Your Different and tagged Legendary Stories/Shits & Giggles, Podcast