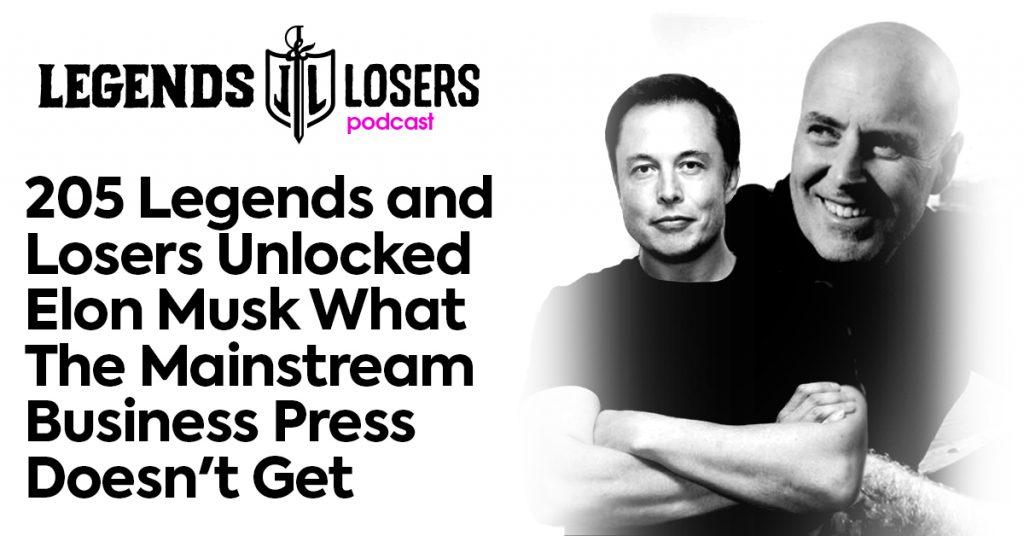 On today’s episode of Legends and Losers Unlocked, Christopher Lochhead tackles another topic that has been on his mind of late. Entrepreneur and Tesla founder Elon Musk has received a lot of negative press recently. Christopher proceeds to break down what the press doesn’t get.

“These geniuses, these people who take big risks are by definition unique, by definition strange. They are doing things that are exponential, not incremental.” – Christopher Lochhead on Elon Musk

Lately, Elon Musk has done some things that are a little bit unusual. These include tweeting a lot about taking Tesla private and claims about the rescue of the boys in a cave in Thailand that got people upset. Not to mention the piping hot issue of his smoking weed and drinking scotch when he guested on a podcast.

These concerning issues have raised a couple of eyebrows, but the press has only managed to skim the surface.

Mega Outlier in a World of Outliers

Elon spends his whole life going too far to find out how far he can go. And this is what the mainstream media doesn’t get. The entrepreneur creates electric cars and spaceships and wants to put tunnels under Los Angeles, and all these scream wacky.

Of course not everything that he does should be condoned. But Elon isn’t a button-down CEO. He is someone who exponentially moves the world forward, not incrementally running a company to squeeze out an extra penny of earnings next quarter.

Every Legend Gets Criticized

We must also note that legendary creators and innovators always get criticized in one way or another. One day people said Thomas Edison was a fake and a killer. They didn’t spare Benjamin Franklin and Steve Jobs.

Nobody is perfect. But these geniuses are, by definition, different.

Was Thomas Edison a hack? Historians take on claims in The Oatmeal

Genius or manchild? Reconsidering Steve Jobs after his daughter’s book

Genius in Madness? 72% of Entrepreneurs Affected by Mental Health Conditions

Are Entrepreneurs “Touched with Fire”?

Legends and Losers 072: Cameron Herold On Great COO’s & How To Reverse Engineer Your Vivid Vision