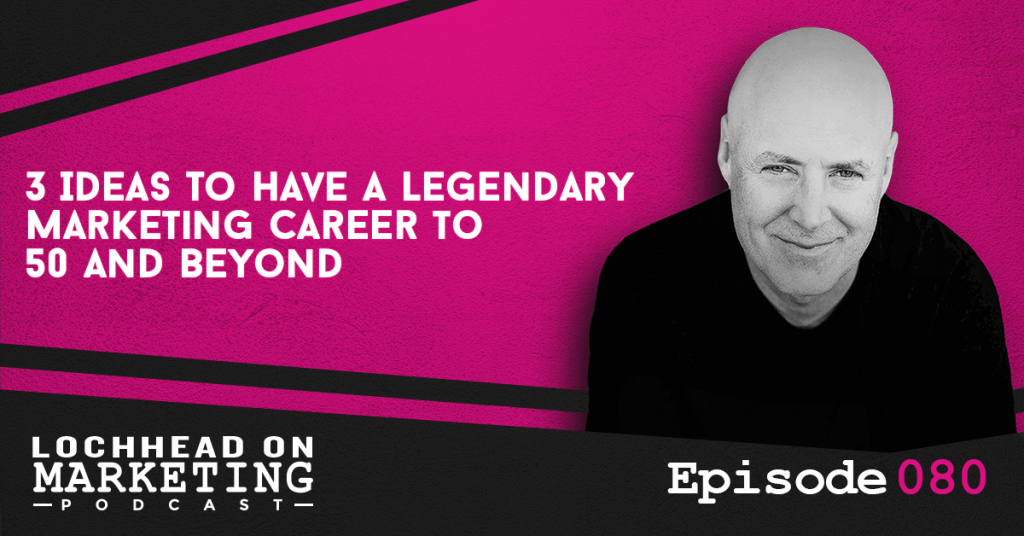 At a time when career uncertainty is high and the need for economic security has maybe never been higher, let’s talk about three ideas on how you can have a legendary marketing career to 50 and beyond. If you’re younger or older than 50, Chris has got some ideas for you in this episode.

During the last episode with Dave Gerhardt, CEO of Privy, there was a question that popped up around the possibility of having a career in marketing past the age 50.  Chris thinks there’s ageism in business broadly and certainly, in the tech business as well. He further shares facts from an Harvard Business Review that says, “seven out of 18 top Silicon Valley companies having a median age of 30 or younger.”

“In addition, a study conducted by the San Francisco federal reserve bank showed that callback rates for jobs for older people, older applicants were much less. And with women having lower callback rates than men, additionally, more research from Stanford. The Stanford center on longevity says that, contrary to popular belief, older workers are healthy and have a strong work ethic and tend to be very loyal to their employers and are more likely to be satisfied with their jobs than their younger coworkers.” – Christopher Lochhead

Some may claim that younger professionals have more energy to fulfill work. However, London Business School published a study which showed that people under 45 were exhausted. So now, Chris advises listeners, ages 50 and above, to become known for a niche that you own.

“You don’t want to be just a generic marketing person. What you want to be is recognized as an expert, as a guru, as a Yoda, as a sensei in a particular type or style or approach or discipline of marketing said in a simple way, niche down.” – Christopher Lochhead

3 Ideas For Your Career

Number one, ask yourself the Seminole question, “what am I great at that few others are great at, that also delivers the most economic value.” Step two, niche down hard on that superpower skill. Third, name yourself in your niche, claim it and frame it.

“Now you know that your personal niche is working for you. You become known for a niche that you own. As that happens, as you age and, assuming you stay current, you do legendary work. You have to produce legendary results. There’s no question about it. Of course, you have to build great relationships. So you do those other smart things along with being known for a niche that you own.” – Christopher Lochhead

To know more about the 3 Ideas To Have A Legendary Marketing Career to 50 and Beyond, download and listen to this episode.

5 Ways to Respond to Ageism in a Job Interview

Silicon Valley has an age problem

When No One Retires

Our Assumptions About Old and Young Workers Are Wrong