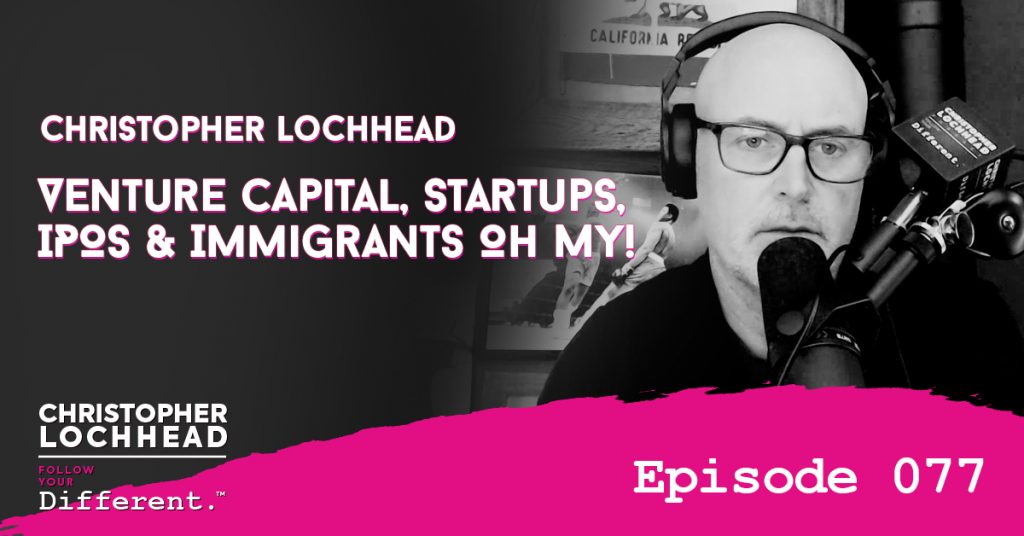 In this episode, Christopher Lochhead shares his insights about venture capitalists, start-ups, IPOs and immigrants and how these topics have driven the economy of the United States. Lochhead poses some serious questions and asks why there is not enough discussion on these matters.

Venture Capitalists and The Upcoming Elections

In a study published by Brookings, they claimed that “in recent decades Venture Capital (VC) has generated more economic and employment growth in the U.S. than any other investment sector. Annually, venture investment makes up only 0.2% of GDP, but delivers an astonishing 21% of U.S. GDP in the form of VC-backed business revenues.”Further, Brookings stated that 51% of VCs invested around $45.7B in California.

Lochhead concludes that other states are losing the opportunity of gaining value in this incredible economy.

For Lochhead, the lack of support of government officials might explain the absence of VC in other States. Successful VCs have proven to create a growth dynamic that fosters innovation and creates more start-ups. Unfortunately, seated officials fail to see this.

“Maybe its time for us who care about entrepreneurship and the difference that it makes in the world, to make sure that our candidates⁠—focuses on this topic.” – Christopher Lochhead

According to Yahoo! Finance, around 5,000 new millionaires will be walking the streets of Silicon Valley after this year’s IPO. They would surpass the estimated 1,000 millionaires who emerged in 2004 from Google’s IPO and the 1,000-plus millionaires in 2012 after Facebook went public.

“Tech IPOs not only create wealth, but IPOs are a hot-house flower environment for creating more startups.” – Christopher Lochhead

“We need entrepreneurs and start-ups and growth-oriented businesses, cause that’s where the jobs, innovation, and productivity comes from.” – Christopher Lochhead

Lochhead thinks that there is a lack of conversation about immigration⁠—it’s not in mainstream media, not even in this election cycle. Specifically, he points out how the country attracts and supports immigrant entrepreneurs, given the fact that U.S. immigration law does not lean towards them.

“If Americans don’t want to start companies, don’t we need to attract immigrants who will?” – Christopher Lochhead

To hear more about Christopher’s thoughts on venture capital, startups, IPOs and immigrants and more relevant information, download and listen to the episode.

Brookings – As the venture capital game gets bigger, the Midwest keeps missing out

Yahoo! Finance – Silicon Valley could have 5,000 new millionaires after this year’s tech IPOs

WSJ – The IPO Millionaires Are Coming!

Axios – U.S. startups are in a surprising 13-year slump

Share on FacebookShare on TwitterShare on PinterestShare on LinkedInShare on Email
Posted in Follow Your Different and tagged Category Design, Entrepreneurship, Investing