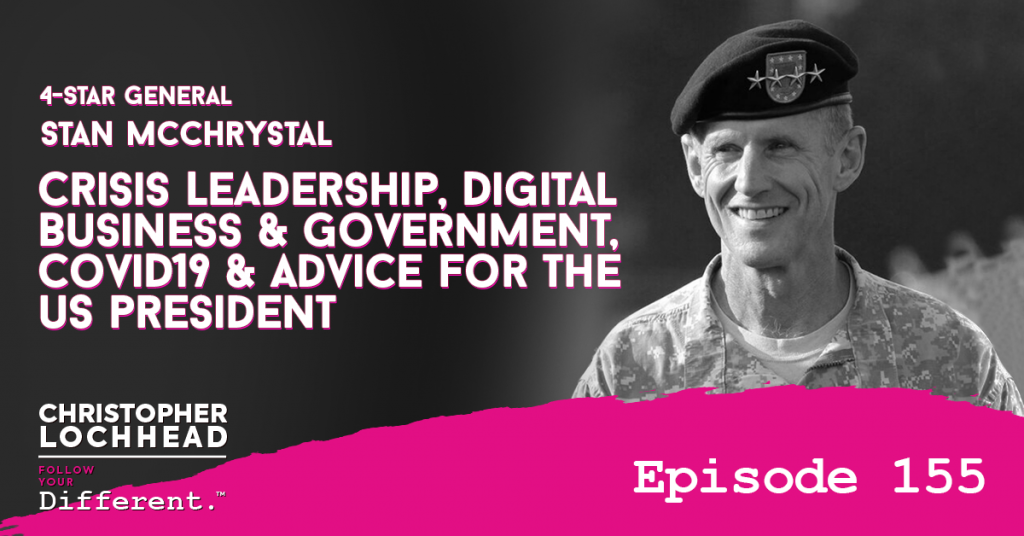 Today, we have a legendary conversation with a legendary American Hero, retired 4-Star General, bestselling author, entrepreneur and educator Stan McChrystal. He is the partner of Chris Fussel who was recently on Follow Your Different Episode #149.

We get into these topics: leadership, digital leadership, crisis management, his view on how we got here with COVID19 and how we get out of it. We also discuss the digital divide between the public and private sectors and what we should do about, Pay special attention to The General’s advice for business leaders, State Governors and The President of The United States.

An Experience No One Predicted

Former Defense Secretary Robert Gates calls Stan “perhaps the finest warrior and leader of men in combat I ever met.” This was definitely one of the greatest descriptions one could say about him. He is the kind of leader any company would want in their team, especially during these unusual times.

Stan described this coronavirus pandemic as disorienting. It is highly different from most of the crises in our lives. We face an amorphous viral threat and we get affected economically as well/.

“So the average person is going through an experience he probably has never predicted. He got to get his mind around it and not just their own mind, but also their family, their organization and all the people they care about.” – Stan McChrystal

Aside from possessing leadership fundamentals, Stan calls for a different kind of leadership during these unusual times.

“Your organization can have had a strategy you’re very comfortable with that was executing in a set of places. Suddenly that strategy, for any number of reasons, appear to be absolutely invalid now. So the leaders got a role to first, give people a sense of direction and then provide direction. And finally, the leaders got to inspire.”  – Stan McChrystal

Christopher asked Stan about the daily video briefings he spearheaded when he was in the military and Stan gave a nice story back in memory lane. He was citing this as one of the best examples of digital leadership especially in times of crisis.

“Out of necessity, we spread our force. That was 2003 and then we realize, how do you synchronize that? We were at the beginning of the technological boom and we latched on the video conferences, laptops and we connected the entire force, every day, for 90 minutes. When I took command, it was 50 people for 30 minutes. Then we opened it to 7500 people for 90 minutes. To some people, it may sound like madness but it was the most efficient thing I’d ever been a part of,” – Stan McChrystal

To know more about the digital divide between the public and private sectors and what we should do about it and The General’s advice for business leaders, State Governors and The President of The United States, download and listen to this episode,

Stan McChrystal is a retired 4-Star US General.

He is best known for his command of Joint Special Operations Command (JSOC) in the mid-2000s.

His last assignment was as Commander, International Security Assistance Force (ISAF) and Commander, United States Forces – Afghanistan (USFOR-A).[5] He previously served as Director, Joint Staff from August 2008 to June 2009 and as Commander of JSOC from 2003 to 2008, where he was credited with the death of Abu Musab al-Zarqawi, leader of Al-Qaeda in Iraq.

Team of Teams: New Rules of Engagement for a Complex World

Share on FacebookShare on TwitterShare on PinterestShare on LinkedInShare on Email
Posted in Follow Your Different and tagged Authors, Entrepreneur, military/law enforcement