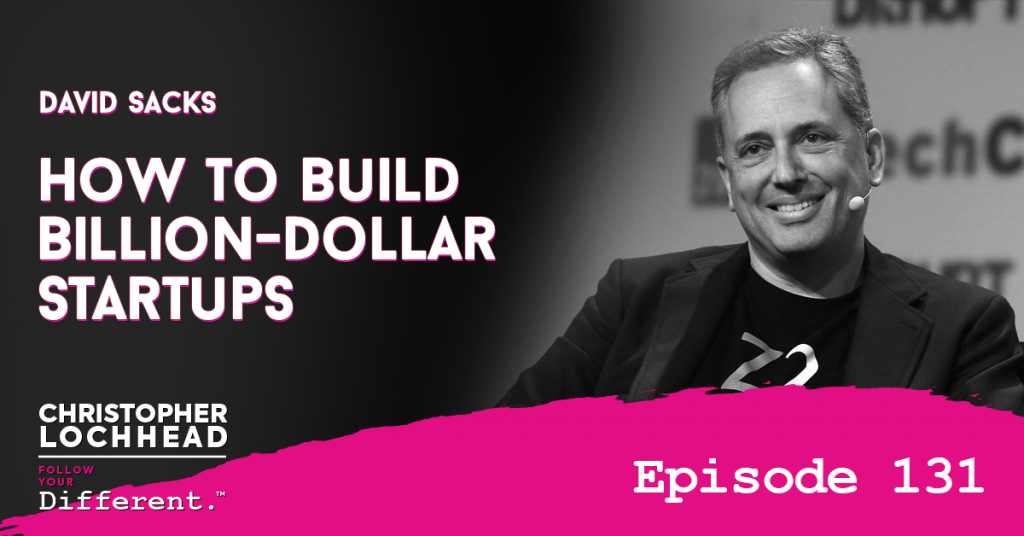 In this episode, we have a real conversation about legendary entrepreneurs and investor David Sacks about how to build billion-dollar startups.

We talk about how startups go off the rails and what is ok and not ok to lose money on. We also touch on why B2C strategies have become powerful for B2B companies and many more! If you’re an executive or an entrepreneur, even if you’re outside of tech, get your pen ready. there’s a ton on this episode!

We continue our run of legendary VCsc with David Sacks. He was a co-founder of PayPal, Founder, and CEO of Yammer and Founder of Craft Ventures. Some of his investments include Facebook, Uber, SpaceX, Palantir Technologies, Airbnb and Bird

This is another great example of the power of a real dialogue podcast.

Going Off The Rails

David shares how he witnessed high profile companies going off the rails for several reasons. He noted that aside from product-market fit, there are other mundane reasons why these companies fail. Here’s the big list that could go wrong in high growth companies:

“One is commoditization, the rest of the world catches up the startups innovation. Two, cost of customer acquisition, a bunch of reasons it could happen. Third, margin problem, negative gross margins. Fourth, external dependency. Fifth, leaky bucket, there’s a problem with retaining customers. Sixth, regulatory compliance, then, sales compliance problem, that’s seven. Eight, doing things that don’t scale. Nine would be the founder psychology problem which is pushing things too far and tenth, company culture problem. One the 10.1 mark, macro shock where the company goes out for financing and isn’t able to raise around because of one of the problems I mentioned in them. Everything comes to head and you had a car crash.” – David Sacks

The Challenge for Startups

One of the greatest fears of startups Is commoditization. David says there is always a risk of the competition catching up in terms of software design. He encourages startups that it is a trade-off to make, to move fast enough to maintain market leadership.

To hear about David’s thoughts on how to define and dominate a market category, what areas of technology David thinks have the most promise and more, download and listen to this episode.

David Sacks is a highly accomplished  entrepreneur and investor in internet technology firms.

He is general partner of Craft Ventures, a venture capital fund he co-founded in late 2017. Previously as an entrepreneur, Sacks was the founding COO and product leader of PayPal (acquired by eBay in 2002 for $1.5 billion) and Founder/CEO of Yammer (acquired by Microsoft in 2012 for $1.2 billion).

In 2016, he led the turnaround of Zenefits as interim CEO.

In 2017, Sacks co-founded blockchain startup Harbor as an incubation of Craft Ventures.

Share on FacebookShare on TwitterShare on PinterestShare on LinkedInShare on Email
Posted in Follow Your Different and tagged Leadership, Startups, VCs