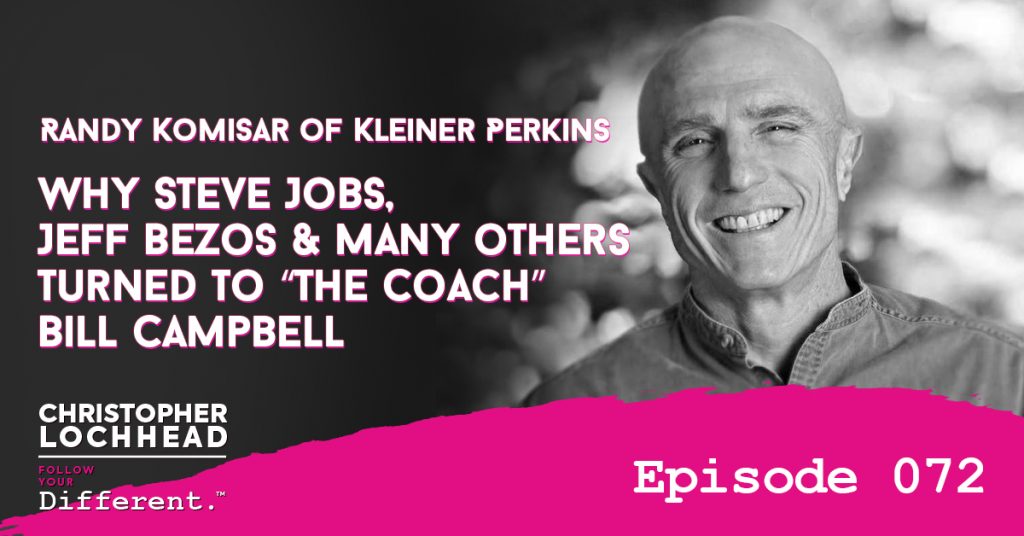 Randy Komisar of Kleiner Perkins joins us today to celebrate the life and lessons of legendary Silicon Valley coach, late Bill Campbell. Guest Randy Komisar, along with colleague Paul Martino of Bullpen Capital, came together to capture Bill in a podcast. Bill was the coach to Steve Jobs, Jeff Bezos, and countless Silicon Valley legends.

Bill was featured in a book called Trillion Dollar Coach, prior to the release of Randy and Paul’s podcast. The content of the book were flattering, but the title was so off-putting. It sets the wrong tone for understanding what BIll is all about.

“Bill wasn’t a guy with a big theory. He’s not that guy who has rules like ‘10 rules to be successful.’ He was somebody who connected incredibly well with who you were and what you need and was able to get you there.” – Randy Komisar

Bill was associated with a trillion dollars worth of value creation. He was not a highfalutin guy who would’ve wanted to be in the cover of a book. They were able to capture the real Bill, more than what the book portrayed him to be, through this podcast.

Randy and Paul had the opportunity to learn and share their respect and admiration for Bill and they want to pay it forward, through the production of their podcast. They wish that the entrepreneurs for the generations to come would be able to do the same.

Entrepreneurs could get a lot of inspiration from Bill. Randy even cited that if it was not for Bill, he would have quit business a long time ago.

“Bill made business interesting for me and many people because he made it about people, not money.” – Randy Komisar

Learnings From The Late Bill Campbell

One important point from this discussion was the difference in doing what is right versus what is smart.  Bill believes smart people are great at rationalizing. Most of these people, though, still tend to overthink a problem and justify doing the wrong things.

To hear more about Why Steve Jobs, Jeff Bezos & many others turned to “The Coach” Bill Campbell and more relevant information from Randy, download and listen to the episode.

The Monk and the Riddle: The Art of Creating a Life While Making a Living – Book

Share on FacebookShare on TwitterShare on PinterestShare on LinkedInShare on Email
Posted in Follow Your Different and tagged Entrepreneurship, Motivation/Inspiration