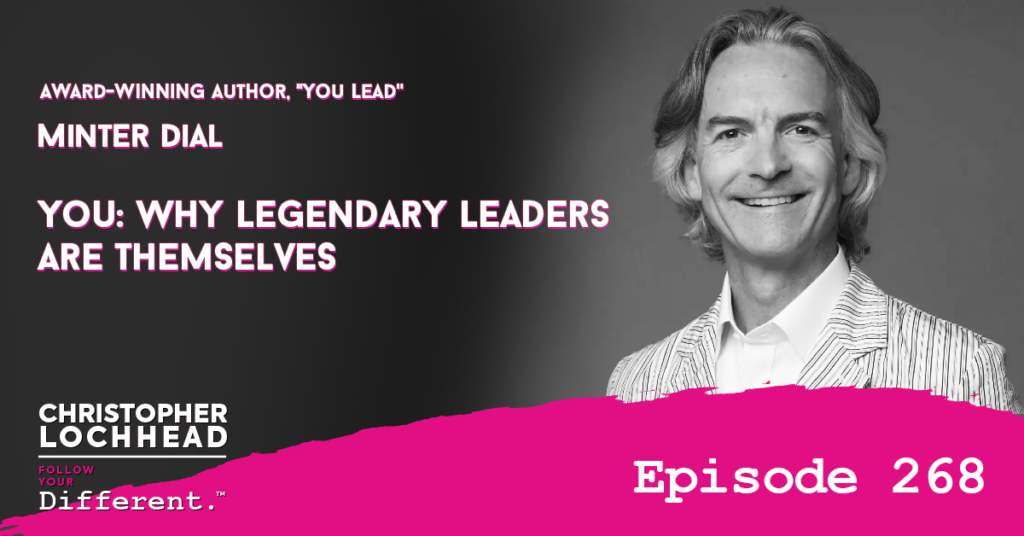 On this episode of Christopher Lochhead: Follow Your Different, we ask the question: Who are You?  What do you want to be? What’s the difference between being and doing? And who better to help us answer those questions that the legendary Minter Dial.

Minter Dial is a B2C Branding Master, having had a legendary career with L’Oreal and the CEO of hair care brand REDKEN. He’s also an extraordinary storyteller; his first two published books be international prize winners. His new book, called You Lead, is definitely a must-read.

If you believe in the power of dialogue to change thinking, you’re going to love everything about this episode.

The conversation starts off about Minter Dial’s new book, and how it has brought up several great points as you progress through it. One of the most thought-provoking ones is the idea of being yourself makes you a better leader. This makes sense, as one of the biggest causes of struggle and pain in life and one’s career is trying to be something you are not, just to accommodate others.

Minter explains that one of the issues that bad leaders face is that they probably do not have the proper people skills for the job. That disconnect, more often than not, stems from their lack of awareness about who they are.

“Essentially, there are probably very few good leaders. And the reason for that isn’t that they don’t have people skills, its that they haven’t done the work to figure out who they truly are. My observation is that a lot of people think they know who they are. They might have a broad idea of who they want to be. But they haven’t done the hard work that says more precisely “who I want to be.” “ – Minter Dial

The Ability to be Good

Christopher shares that one of his friends think that his superpower was the ability to go deep in anger. That he was able to embrace and utilize it to make powerful statements, but not let it consume his rationale.

Minter explains that he thinks that people are wired to be good, in general. The reason why we are like that is the need to be together rather than stand alone. The only way that would work is if we are good to each other.

“If you’re an evil person, as a CEO, you might do well in the short term. But as soon as you leave the vacuum that you’ve created, and all the damage that you have sown will cause an impossibility for the follow up act. And so it might be a short term approach. So the bottom line is, I think that we all have the ability to be good.” – Minter Dial

Sure, all people have dirt, a bit of evil and naughtiness in all of us. But it is important to be aware and understand how much of that we should bring to the table. But it’s also not good to hide it all. Showing some of your foils or imperfections shows that you are still human.

Christopher continues with this line of thought, saying that it isn’t radical transparency that CEOs need, but radical self-awareness. To know your own strengths and weakness, so you know what to work on and keep yourself well-rounded. You are also then aware of what you lack, and can surround yourself with people that can fill those gaps.

Minter agrees with this assessment, and adds that sometimes, we tend to exclude people that could attribute to this roundedness. His example for this is journalists. If you’re building a tech team, you’d get the usual suspects: HR, finance, and marketing. But what a bout hiring a journalist? At first, you might think it’s an odd fit. But if you think of what journalists do rather than the industry they came from, they are probably really good at discerning the tastes of the people. They would have to be when writing up articles to entice people to read them.

His point is, learn to diversify in your choices, and it could end up with a more rounded group than you normally would.

To hear more from Minter Dial and how to figure yourself out, download and listen to this episode.

Minter Dial is a storyteller, filmmaker, four-time author and an international professional speaker. After a 16-year international career at L’Oreal, he set off on his own and speaks and consults on Leadership, Branding and Transformation.

He has spoken at prestigious conferences around the world (and now online) to great acclaim. He works with major global brands such as L’Occitane, Google, Samsung, Remy Cointreau, Kering and Tencent.

Among his works, Minter is author and producer of the award-winning WWII documentary film and book, The Last Ring Home, A POW’s Lasting Legacy of Courage, Love and Honor in World War Two (November 2016). The book won the Book Excellence Award 2018 in the category of Biography.

His second book, Futureproof, How to get your business ready for the next disruption (Pearson-FT Imprint), co-authored with Caleb Storkey, bowed September 2017 and won the Business Book Award 2018 in the category of Embracing Change.

His last book, Heartificial Empathy, Putting Heart into Business and Artificial Intelligence (DigitalProof Press), came out in November 2018. It won the Book Excellence Award 2019 in the category of Technology and was finalist for the Business Book Awards 2019.

His newest book, You Lead, How Being Yourself Makes You A Better Leader (Kogan Page) bowed in January 2021.

Prior to setting up his own ventures, Minter led a 16-year international career with the L’Oréal Group – including 9 different assignments in France, England, USA and Canada.

Among these, Minter was CEO Worldwide of REDKEN, then of the Professional Division for the Canadian subsidiary. In his final position at L’Oreal, he was a member of the Executive Committee worldwide, in charge of eBusiness, Business Development and Education.

Minter’s leitmotif is to elevate the debate and connect people. Sportingly, he’s been a lifelong fan of the Liverpool FC and the Philadelphia Flyers. He’s a dedicated Dead Head, padel tennis aficionado and loves languages.