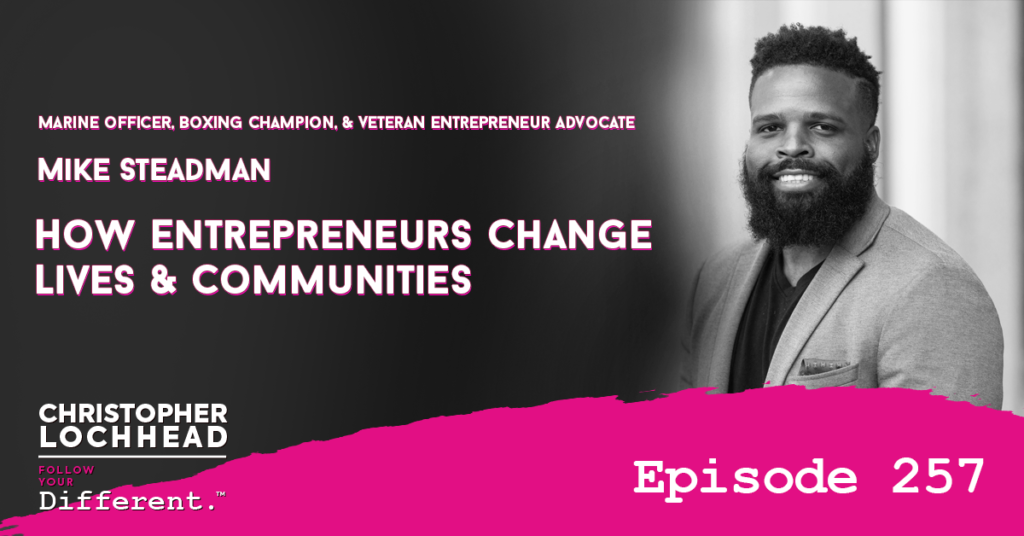 “IRON” Mike Steadman is a retired combat Marine officer. He is also a three-time National Collegiate boxing champion in the military. He’s the founder of Iron Bound Boxing and Education, which is a non-profit in New Jersey. He also founded a company called Dog Whistle Branding, a marketing agency that helps veteran-owned businesses with podcasting, brand, and category design.

In this episode of Christopher Lochhead: Follow Your Different, we have a dialogue with “IRON” Mike Steadman as we talk about all things entrepreneurship, including topics such as helping veteran entrepreneurs. This is a conversation you’re going to find incredibly inspiring and empowering, so stay tuned.

“IRON” Mike Steadman on Losing the Ability to Communicate

The conversation starts as Mike responds to a comment about sounding like a podcaster. He shares that being a podcaster helped him become better at public speaking. Now, when he does interviews, people are surprised on how Mike can do it all in one take.

Nowadays, being able to communicate with each other in a clear and articulate way seems like an outlier than the norm. Mike thinks that this is due to the internet and the anonymity it provides, that we lost something essential when talking to other people.

“I think we’re struggling with it. It’s because we’ve lost the ability to communicate with empathy. That’s the thing, right? You can communicate, share your opinion, or something. But you can also be an asshole about it. And I don’t think we are very empathetic anymore.” – Mike Steadman

“IRON” Mike Steadman on being the Loudest in a Conversation

One of the problems we have with communicating nowadays is that there seems to be a lot of yelling going on. Some do it mostly for attention, others to push their ideas further than the others.

For Mike, it’s a matter of respecting the people you are conversing with.

It is ironic that “social media” has made a lot of people antisocial. Mike thinks it is because people find it easier to just hide behind a computer screen and interact with people that way.

Unfortunately, some people who start a business has the same mindset. But for Mike, it’s just not the best way to do things. Regardless of whether you’re doing things digitally or analog, you still need to communicate with people properly and build proper relationships with them.

“I’ve been saying (that) business is a contact sport. Unfortunately, I think a lot of the generation now when they start a business, they think they can just go on social media. But human to human, you still have to look someone in the eye (and) talk to him convey your value. And I think the default (now) is social media. Even dating girls, the default is an app. So I think we have lost the ability to communicate, actually.” – Mike Steadman

To hear more from “IRON” Mike Steadman and how Social Media is both the cause and the cure for proper communication, as well as how he helps veteran entrepreneurs connect with the current market, download and listen to this episode.

“IRON” Mike Steadman is a serial entrepreneur based in Newark, NJ, who’s committed to improving the economic and social outcomes of urban youth and military veterans through boxing, entrepreneurship, and new media.

His goal is to raise 1.5 million dollars to build the ever IRONBOUND Courage Academy, a 5,000 sqft boxing facility and small business incubator space for Newark’s youth and young adults.

Through his efforts growing IRONBOUND Boxing and IRONBOUND Media, Mike has established himself as a high-profile veteran advocate and the new face of social entrepreneurship.

To learn about IRONBOUND Boxing and our efforts in Newark, please visit www.Ironboundboxing.org