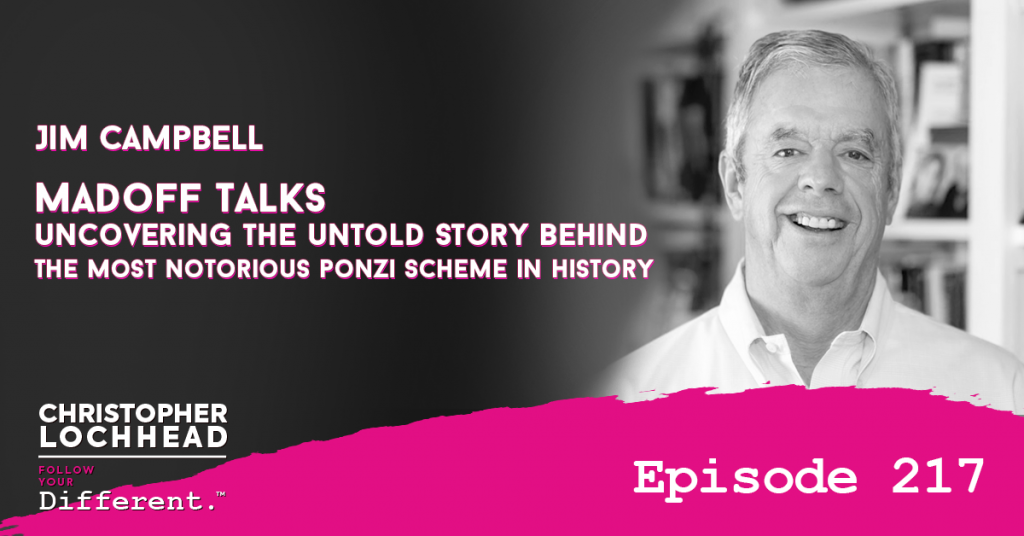 There’s scams, crimes, and frauds. Then there’s what Bernie Madoff did.

CNBC says that he committed the nation’s biggest investment fraud. The Wall Street Journal called it “the biggest ponzi scheme in history.” At sentencing, Judge Denny Chin called Madoff’s crimes “extraordinarily evil”. In the end, many people lost everything they had.

For those who are unaware, Madoff stole $19.5 billion, which he said had grown to $64.8 billion. Though not a single dollar or penny was ever invested in anything. He stole it, plain and simple.

Jim Campbell joins us in this episode of Follow Your Different, as we cover his book about the topic. His book, Madoff Talks, is already being considered as an authoritative source on this massive crime committed by Bernie Madoff that impoverished thousands of investors around the world.

What you are about to hear is a deep, shocking, and riveting dialogue that takes you through it all. From how Madoff did it, to the systemic problems with US regulators and the ongoing failure of the SEC.

The Hows and Whys of the Book

When asked how the book came to be, Jim talks about how he had built a connection with Bernie Madoff. What started as a simple correspondence culminated in over 400 pages of communication over several years.

Jim figured that with all the information he has, it would be a shame to not do anything with it. So began his mission to investigate and sort out the truths and lies about Madoff’s claims.

As to why he wrote the book, he had 3 major motives for it:

“The mission to expose the failure of the system is the real takeaway of the book. People were interested in the sexy part: Bernie talking, what did Ruth know, and how the heck did he get away with it. Which is all fascinating and riveting stuff, but the takeaway is this is what had happened and how it happened.” – Jim Campbell

How Madoff Exploited the System

Jim shares how Madoff worked his way around the system, subverting 5 SEC investigations before someone finally figured it out.

Madoff did so by exploiting the system itself, in small ways to keep it unnoticeable. What surprised Jim is how Madoff ran a legitimate, squeaky-clean company to hide his other dealings. So while the company took the brunt of investigations, they couldn’t catch him on anything. Simply because there was nothing to catch on that front.

He further explains that the SEC did not have the right examiners on the case. They kept exonerating him on the wrong crime, which was Frontrunning. The final piece of it was the examiners were never allowed to talk to anyone else in the firm except for Bernie or his right-hand man.

“So he blocked them, he took advantage of the silos, and they kept investigating the wrong (thing). They chased the wrong rabbit.” – Jim Campbell

Jim goes on to iterate how Bernie Madoff gamed the system and played to its weaknesses. By studying how individual silos operate and the lack of communication thereof, he got away with a lot of things.

What’s fascinating and horrendous at the same time is that he could’ve easily been called out on his subterfuges had people been more thorough in their line of work. Yet Bernie had a trick for this as well, by usually calling in right before the weekend or after trade hours and seemingly burying details in “paperwork”, or having to check in a foreign office that doesn’t really exist.

When asked if heads rolled after the whole ordeal was made public, here’s what Jim Campbell had to say:

“The SEC reports were excellent reports. None of them were censored, so you got to give them credit. Except they issued it on a Labor Day weekend, with hardly any coverage. Eight people were demoted at the SEC, none at the management level. So yeah, nobody was penalized.” – Jim Campbell

To hear more from Jim Campbell about Bernie Madoff and the damage his actions has wrought, download and listen to this episode.

Jim Campbell is the host of the nationally syndicated radio show Business Talk with Jim Campbell. He is known for his hard-hitting interviews of leading figures from the worlds of business, politics, and sports.

Book: Madoff Talks: Uncovering the Untold Story Behind the Most Notorious Ponzi Scheme in History