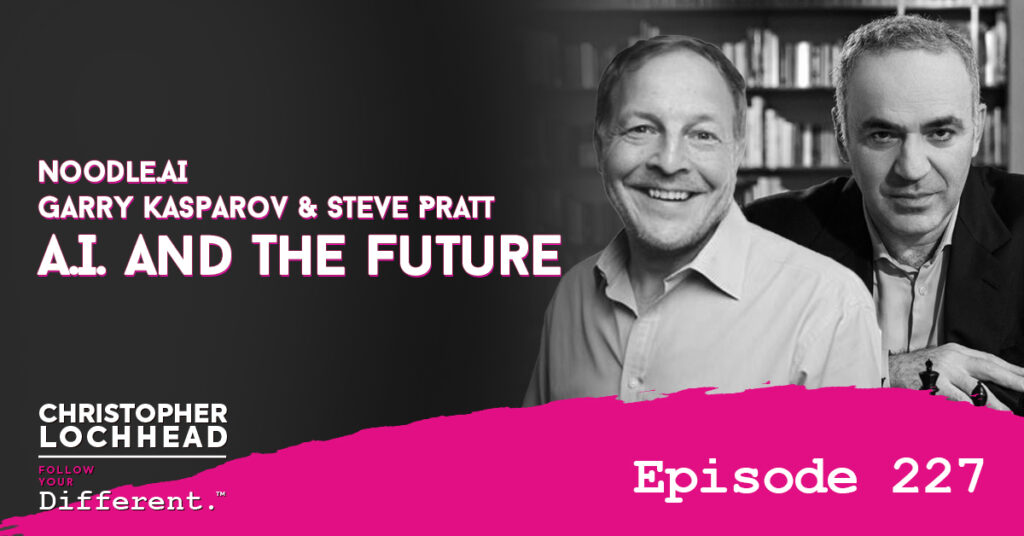 In many circles, Chess is viewed as the ultimate display of intellectual might. If you think about it, chess is a fighting game that is purely intellectual and excludes all chance. In this episode of Follow Your Different, we talk to one of Chess’ ultimate combatants, Garry Kasparov.

At age 22, Garry Kasparov became the world’s youngest chess champion, and from 1984 to his retirement in 2005, he was ranked the number one Chess player on the planet for a record 255 months of his career. He is also known as the man who competed against an IBM supercomputer in 1997.

Today, Garry Kasparov is a political activist and an outspoken critic of Vladimir Putin. He is also the chairman of the Human Rights Foundation, and the author of the best-seller called Deep Thinking, Where Machine Intelligence Ends and Human Creativity Begins.

In addition to all of this, he’s also working with a few advanced technology companies, in which I had the pleasure of meeting him. He has started working with a good friend of mine, Steve Pratt of Noodle.AI. So listen in as the three of us talk about Covid-19, the relationship between humans and machines, and how Garry jokes about being the first knowledge worker to have his job taken by a computer.

When asked how they were doing nowadays, Steve comments that it felt strange now that everything is slowly opening up. Nowadays, it seems weird when you see people not wearing masks when you go out, as compared to only a few months ago of masks and lockdowns.

Garry shared that while it is slowly opening up in America and Europe, the rest of the world is going through a very different experience. He laments the current situation in Russia particularly, where his family and friends reside.

“We know from history that the innovative power of undemocratic states is cannot be compared to the power of the free mind. It’s not an accident that the virus came from China, but the response came from the United States.” – Garry Kasparov

Garry also points out the disparity on how people trust the vaccines compared to the Russian-made Sputnik vaccine. He attributes this mostly to having the proper data to prove its efficacy, which the Sputnik vaccine is sorely lacking at the moment. While there are vaccines that have lower efficacy rates compared to those made by Pfizer and Moderna, they’re still widely preferred due to the fact that they have data and tests to back those numbers up.

Working Together and Freeing the Mind

When asked if the low vaccination rates can be attributed to the vaccine or implementation, Garry answered that it was both happening at the same time. While the vaccine hesitancy was expected due to the lack of data on their vaccine, Russian government tried to promote Sputnik as the ultimate cure against COVID. They went as far as donating it to other countries, some of which flat-out refused, which further damaged its credibility.

Moving away from Russia, Garry then compared China and the United States’ response to the virus. He notes that while China had a huge head start in studying the COVID virus, it still took them a while to create a vaccine that had low efficacy ratings. Enter US and the combined effort of the public and private sectors, and you have two working vaccines in just 10 months, both of which boast great efficacy.

“So again, it’s very important to recognize that it’s this the free world, when we lift all the restrictions on risk. It could realize the wildest dreams, and somehow, I think the pandemics served us well, because it proved that we have to go back to the spirit of innovation and become pioneers, to become explorers. What’s important, again, the free world has potential, and now this potential have been exposed in a positive way.” – Garry Kasparov

We then talked about technology and A.I., how people are still against it in fears of somehow making an evil sentient A.I. that will rule us all. Garry explains that we shouldn’t be afraid of A.I.; rather, we should use it to its fullest potential and keep it away from the hands of bad humans.

“The problem is not with the machines. The problem was bad humans that can use these machines to harm us. That’s the story of technology.” – Garry Kasperov

Instead, we still blame the machine if someone used it and caused problems. So, we still limit their capabilities, afraid of things we have just fantasized about while ignoring the benefits it could bring.

There’s also the argument of machines and A.I. stealing jobs from people. To which Garry comments that we should not despair if it happens. Rather, we should look forward to what we can do next, and adapt to it. Whether to learn the technology to handle the A.I., or develop something that can be used hand-in-hand with the new technology.

Rather than fighting with machines, we should learn how it could work to our benefit. Because at the end of the day, machines can decide, but it’s a human’s privilege to choose.

If you wish to hear more from Garry Kasperov and Steve Pratt about A.I. and how it can improve our future, download and listen to this episode.

Garry Kasparov became the under-18 chess champion of the USSR at the age of 12 and the world under-20 champion at 17. He came to international fame at the age of 22 as the youngest world chess champion in history in 1985. He defended his title five times, including a legendary series of matches against arch-rival Anatoly Karpov. Kasparov broke Bobby Fischer’s rating record in 1990 and his own peak rating record remained unbroken until 2013. His famous matches against the IBM super-computer Deep Blue in 1996-97 were key to bringing artificial intelligence, and chess, into the mainstream.

Kasparov’s was one of the first prominent Soviets to call for democratic and market reforms and was an early supporter of Boris Yeltsin’s push to break up the Soviet Union. In 1990, he and his family escaped ethnic violence in his native Baku as the USSR collapsed. In 2005, Kasparov, in his 20th year as the world’s top-rated player, retired from professional chess to join the vanguard of the Russian pro-democracy movement. In 2012, Kasparov was named chairman of the New York-based Human Rights Foundation, succeeding Vaclav Havel. HRF promotes individual liberty worldwide and organizes the Oslo Freedom Forum. Facing imminent arrest during Putin’s crackdown, Kasparov moved from Moscow to New York City in 2013.

The US-based Kasparov Chess Foundation non-profit promotes the teaching of chess in education systems around the world. Its program already in use in schools across the United States, KCF also has centers in Brussels, Johannesburg, Singapore, and Mexico City. Garry and his wife Daria travel frequently to promote the proven benefits of chess in education and have toured Africa extensively.

Stephen is an instigator, agitator, and pioneer in creating world-class technology services organizations.

He has spent his career building innovative ways to create value for the world’s most important organizations.

Prior to Noodle, he was responsible for all Watson implementations worldwide for IBM Global Business Services.

He also was the founder and CEO of Infosys Consulting, a Senior Partner at Deloitte Consulting, and a technology and strategy consultant at Booz, Allen & Hamilton.

He twice has been selected as one of the top 25 consultants in the world by Consulting Magazine.

He has Bachelors and Masters degrees in Electrical Engineering from Northwestern University and The George Washington University focused on Satellite Communications.

For fun, Steve plays competitive tennis, races sailboats, and formerly was a crazed rugby player. He enjoys playing acoustic guitar for his children (not ready for prime time).

NYTimes.com: Garry Kasparov – What We Believe About Reality