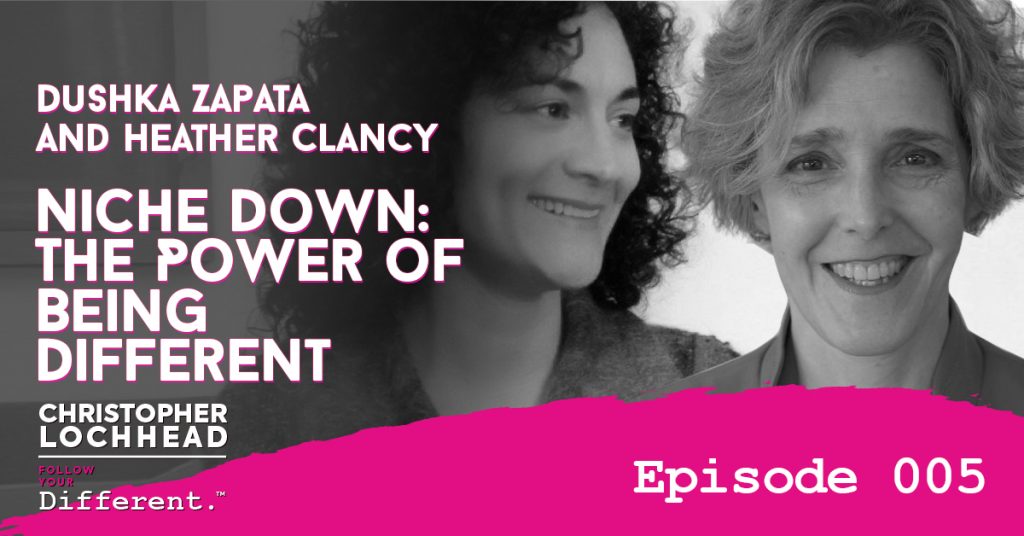 Why is Niche Down, a book meant to be shared with everyone, so personal to its authors? On this episode, Dushka Zapata and Heather Clancy join Christopher to talk niching down, why being different is a superpower, and so much more.

Starting Out Differently While Young

Christopher, half the dynamic duo behind Niche Down, had to deal with what makes him different quite early. He knew he was smart in certain areas and not so much in some. Reconciling his weaknesses and strengths proved very difficult.

“My life has been one giant dichotomy, one giant bipolar adventure.” – Christopher Lochhead

He was highly talented in music and drama but got 4 out a 100 in math. It wasn’t until he was enrolled to a fine arts school that he finally gained his footing. Around the same time, he began to realize, in waves over time, that being himself was the way out of everything.

Then there is Heather, the kid who was brought up to be a well-rounded student. She was amazing at math, in fact taking advanced classes on pre-calculus and physics. While she was programmed in different ways, she knew that she wanted to pursue the creative field.

Heather could have gone in so many directions she was shoved into. Her parents encouraged her to look at different things. But she was never one to jump off a cliff on her own accord.

Heather and Christopher have known each other for 25 years. In their many interviews, Heather realized that Christopher did a lot of the pushing.

Their friendship bloomed from Heather’s penchant for asking questions that helped Christopher change his thesis on a lot of things. Other times, she helped him form a messaging of things that he wasn’t ready for just yet. Coupled with her fascination with entrepreneurship, they eventually became a team.

“I was always so interested in helping those people tell their stories… What makes you different? What did you choose to do that? So when he (Christopher) thought about this book, it just sort of was a natural intersection, I think.” – Heather Clancy

To hear more about the conception of Niche Down and Duska’s microscopic examination of Heather and Christopher’s team-up, download and listen to the episode.

Heather is a long-time celebrated journalist and co-author of Niche Down.

Dushka is one of the famous writers in the Q&A platform, Quora.

Niche Down on Amazon

Share on FacebookShare on TwitterShare on PinterestShare on LinkedInShare on Email
Posted in Follow Your Different and tagged Authors, Women in Business