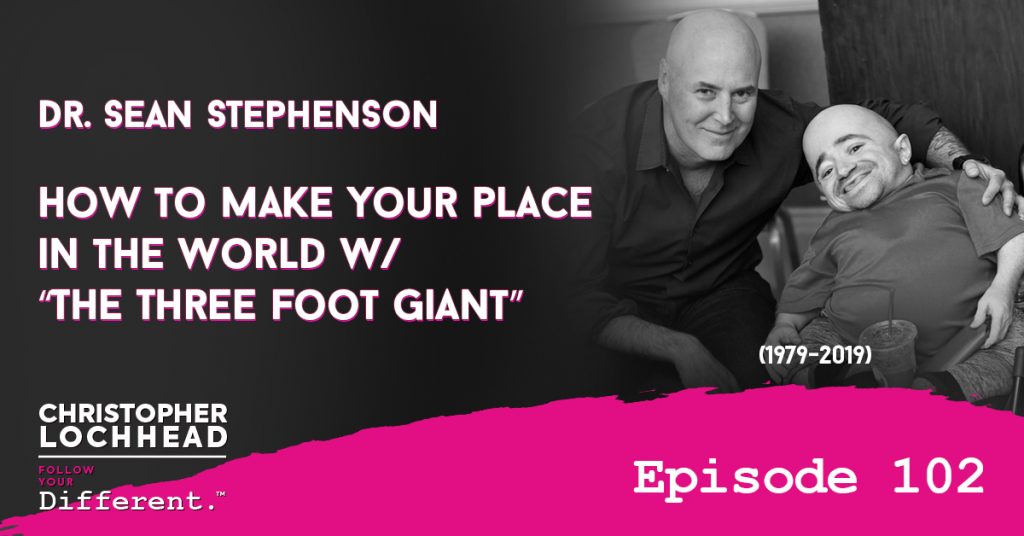 Today’s episode is a special re-issue with Dr. Sean Stephenson, “The Three-Foot Giant.” He’s a great example of turning obstacles into opportunities, transforming his life into a legendary one. This conversation with Christopher Lochhead is made even more powerful upon the recent passing of Dr. Sean Stephenson.

Join us as we relive the inspiring story of “The Three Foot Giant” in this episode.

Dr. Sean passed away on the 28th of August 2019, following an accident. He was predicted not to survive at birth because of his rare bone disorder, Osteogenesis Imperfecta, which stunted his growth and caused his bones to be extremely fragile. When he was 18 years old, he has already fractured his bones for over 200 times.

Despite his obstacles in life, he lived an inspiring life. He served as an instructive example of how to make your place in the world when you can’t find a place in the world. He worked for President Clinton and shared the stage with his Holiness the Dalai Lama and Oprah. He’s also the author of the bestseller: Get Off Your “But”: How to End Self-Sabotage and Stand Up for Yourself.

“I have decades and decades of education where I help people through their pains and their problems. But in some ways, I’m still learning to walk myself, learning to navigate this world, and I’m loving the experience of making mistakes.” – Dr. Sean Stephenson

Staying True To Oneself

Even after achieving his stature as a public speaker, Sean admits that he’s still growing. He was in business with his father for 22 years. His experiences at home were wonderful as he lived with his family until he was 31 years old. However, all good things must come to a challenging end, when he decided to step out into the world, leaving his father behind.

“As of recent, I decided to “out” my true self, words and all. I kind of hid that over the years. If people knew that about me, they wouldn’t respect me. I’m finding out the opposite is true, the more honest I am, the closer people are becoming to me.” – Dr. Sean Stephenson

To continue his self-discovery, he would reorganize his life every five years or so. He wants to look back on the past five years to reevaluate and learn from his mistakes.

“Maybe there’s a wrongful belief out there that the version of you will always be the same as you get older but I don’t agree with that. I’m constantly breaking the mold and starting over and trying new things and figuring out what do I believe in.” – Dr. Sean Stephenson

To hear more about how to make your place in the world and more relevant information about “The Three-Foot Giant” Dr. Sean Stephenson, download and listen to the episode.

Dr. Sean Stephenson was predicted not to survive at birth because of a rare bone disorder that stunted his growth and caused his bones to be extremely fragile (fracturing over 200 times by the age of 18).

Despite his challenges, he took a stand for a quality of life that has inspired millions of people around the world.

Since 1994, his powerful message has been heard at live events in nearly all 50 states and in 16 countries.

Sean has presented at hospitals, universities, prisons, and to companies such as Nike, Whole Foods, Zappos, Walmart, and Sharp Healthcare. He’s shared the stage with U.S. Presidents, billionaire business moguls, celebrities, and his Holiness the 14th Dalai Lama.

Sean has appeared on everything from The Oprah Show to Jimmy Kimmel, in addition to online videos with tens of millions of views.

Mindie Kniss & Sean Stephenson his international best-selling book, Get Off Your “But”,  has been translated into over a dozen different languages.

As a board-certified therapist, and doctor of Clinical Hypnosis, Dr. Stephenson used to see clients in a unique 12-hour session that gets to the root of their fears, excuses, and insecurities.

In the past, Sean hosts live events and group coaching programs to mentor individuals in the art and business of public speaking.

Sean also used to frequent the gym, play NBA 2K with his friends, or watch NBA basketball with his wife and business partner, Mindie Kniss.

You can support his family with a GoFundMe donation here:

Share on FacebookShare on TwitterShare on PinterestShare on LinkedInShare on Email
Posted in Follow Your Different and tagged Life Design, Motivation/Inspiration