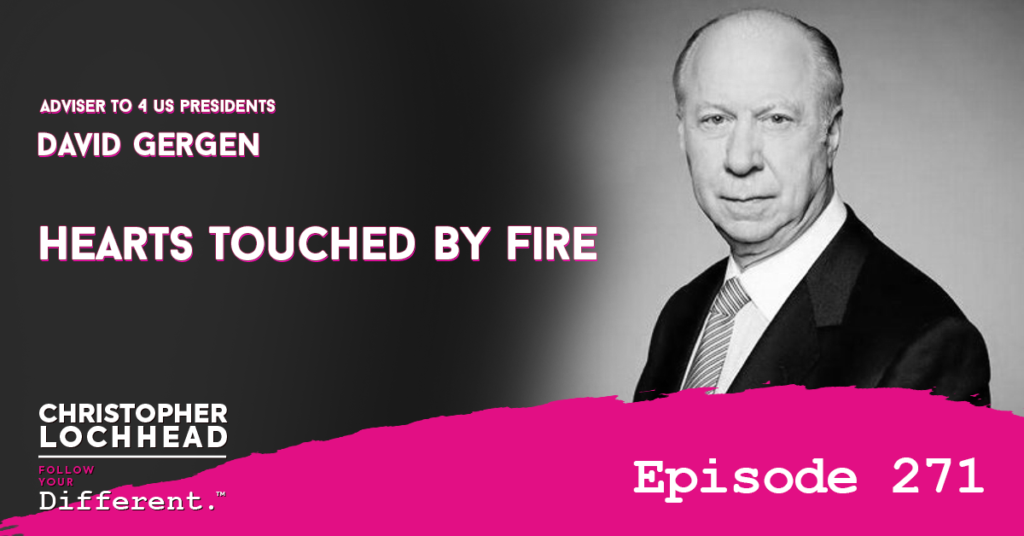 Welcome to the second part of our extraordinary, unfiltered, unfettered real dialogue with David Gergen. On this episode of Christopher Lochhead: Follow Your Different, we dive into the key themes of his new book about leadership, called Hearts on Fire: How great leaders are made.

David Gergen has served as an adviser to four United States President Nixon, Ford, Reagan, and most recently, Clinton. He is the rare political leader to serve his country from both Republican and Democratic vantage points. Professor Gergen also teaches public service, and as the founding director of the Center for Public Leadership at the Harvard Kennedy School. He is also the winner of two Peabody awards for excellence in broadcasting.

If you want to check out the first part our dialogue with David Gergen, you can check out FYD episode 266, where he talked about his thoughts on the war in Ukraine, and the people with important roles to play in it.

The conversation starts off on the topic of David’s new book, and how it is different from his previous work. His new book, Hearts on Fire, felt more like a love letter to the Native Digital generation, and encouraging them as they face the future ahead.

David explains that he felt as though people that are currently handling the reins are going in the wrong direction. But he could see potential in the new generation, and would like to share his knowledge to them and help them grow.

“There were a lot of individuals in my classroom. So I thought the world of them, and I thought they were really impressive. They have the capacity to change the world, or just manage to change this country. So this was a an attempt to call them, to summon who would like to get in the arena. I think they can make a huge difference.” – David Gergen

For David, his latest work was like a Legacy book; a message he wanted to leave for the next generation.

A huge topic in this book is how to tackle adversity – not just to overcome it, but to use it to find your purpose.

David explains that a lot of the younger generations can do great things. But they are hampered by the fact that they have not figured out what their purpose is.

“We can draw hope from the quality of the people who are coming in these next generations. They’re just people who will knock your socks off when you spend time with them. But they’re still searching how they can make a difference.” – David Gergen

Like David said, he wanted his book to be a guide, or at the very least, share his own experiences so that the new generation can derive what they can do better in their life.

David Gergen on Passing the Baton

For David, writing this book was like passing the baton to the next generation. That said, he thinks that the older folks should be willing to do so, rather than clinging to power.

This also leads to the discussion about how leadership is evolving nowadays. We are no longer living in a world in which leaders are only formed in our nation’s most lead institutions. Rather, the current leaders of the generation come from the crowd themselves, like Greta, the Parkland students, and Malala.

To hear more from David Gergen and how the younger generation’s hearts of fire can help spark change in the world, download and listen to this episode.

David Gergen is a professor of public service and founding director of the Center for Public Leadership at the Harvard Kennedy School. In addition, he serves as a senior political analyst for CNN and works actively with a rising generation of new leaders.

In the past, he has served as a White House adviser to four U.S. presidents of both parties: Nixon, Ford, Reagan and Clinton. He wrote about those experiences in his New York Times best-seller, Eyewitness to Power: The Essence of Leadership, Nixon to Clinton (Simon & Schuster, 2001).

In the 1980s, he began a career in journalism. Starting with the MacNeil-Lehrer NewsHour in 1984, he has been a regular commentator on public affairs for some 30 years. Twice he has been a member of election coverage teams that won Peabody awards, and he has contributed to two Emmy award-winning political analysis teams.

In the late 1980s, he was chief editor of U.S. News & World Report, working with publisher Mort Zuckerman to achieve record gains in circulation and advertising.

Over the years, he has been active on many non-profit boards, serving in the past on the boards of both Yale and Duke Universities. Among his current boards are Teach for America, The Mission Continues, The Trilateral Commission, and Elon University’s School of Law.

David’s work as director of the Center for Public Leadership at the Kennedy School has enabled him to work closely with a rising generation of younger leaders, especially social entrepreneurs, military veterans and Young Global Leaders chosen by the World Economic Forum.

Through the generosity of outside donors, the Center helps to provide scholarships to over 100 students a year, preparing them to serve as leaders for the common good. The Center also promotes scholarship at the frontiers of leadership studies.

David has been married since 1967 to Anne Elizabeth Gergen of England, a family therapist. They have two children and five grand-children.

His son, Christopher is a social entrepreneur in North Carolina as well as an author and member of the Duke faculty. His daughter, Katherine is a family doctor, working with the underserved population at the Boston Medical Center.

Check out his new book: Hearts Touch with Fire