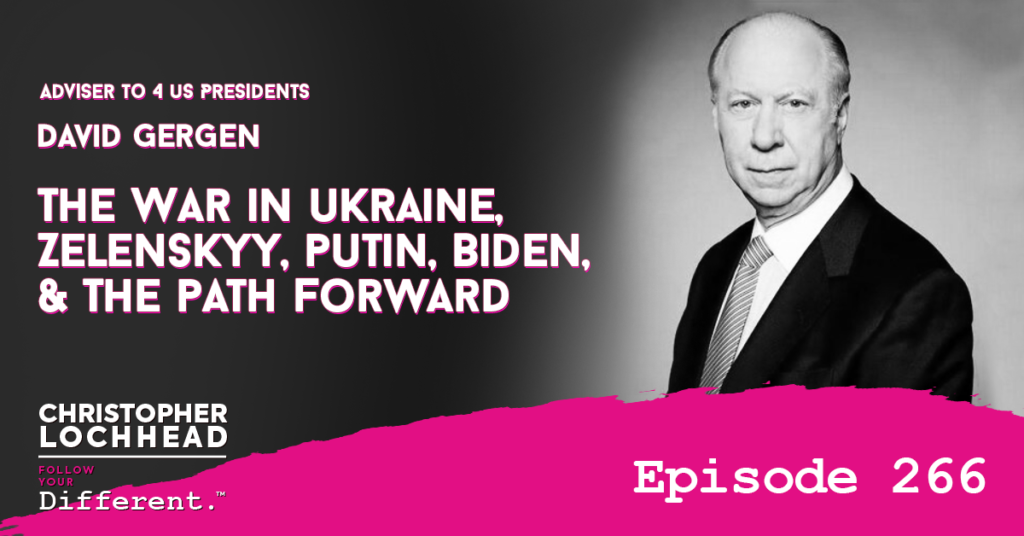 This is an extraordinary time in history COVID recession, radical social change. The shift from native analogues to native Digital’s increased internal violence in the US and in many other democracies. In times of great crisis, we turn to great minds for deeper understanding and perspective. So, on this episode of Christopher Lochhead: Follow Your Different, we ask David Gergen: what’s really going on here in the world?

David Gergen has served as an adviser to four United States President Nixon, Ford, Reagan, and most recently, Clinton. He is the rare political leader to serve his country from both Republican and Democratic vantage points. Professor Gergen also teaches public service, and as the founding director of the Center for Public Leadership at the Harvard Kennedy School. He is also the winner of two Peabody awards for excellence in broadcasting.

So when it comes to the world of politics, there is no other better suited to make sense of everything that is going on. So if you are interested, stay tuned to this episode.

David Gergen on the State of World

The conversation starts off with David getting asked about what he thought about the current situation of the world today.

David says that it’s looking pretty grim at the moment.

“We’ve just had a cascade of crises over the last 20 years and it is sort of bewildering. How many have hit us? And you know, some have come and gone and some would remain with us. The latest one? Ukraine. I it’s just really hard to see a good outcome in this.” – David Gergen

A lot has happened over the past weeks in the development of the Russian Invasion of the Ukraine, and David shares that it may last for a while until both sides have exhausted their arsenal, like two punch- drunk fighters. But he still hopes that Putin sees reason at cuts his losses, and start accepting peace talks sincerely. Because as it is, their current situation doesn’t only affect them, but the rest of the world as well.

When asked about the weird rise of support for Putin from some politicians and celebrities, David agrees that the trend is not mainstream, but it is visible now. He also comments that this line of thought is dangerous, and could only serve to prolong the war, as Putin might continue thinking that he is justified for doing so.

“I think the degree to which people move over to Putin’s hog(wash) will only prolong this war, and very, very likely would politicize it. We will pay a price for that for a long time to come, because we’ll never settle down. We’ll never get back to a smoothly running democracy again, if we keep playing games.” – David Gergen

He adds that we should all double down with our original stance and that is one of morality. Putin is being a tyrant, and we must support Ukraine in any way we can.

On Bush and Biden’s Responses to Crises

David was then asked how he compares Bush’s actions right after 9-11 and Biden’s response in the current Ukraine crisis. He first makes a point that both took a stateman’s approach, which is to protect the United States first and foremost. In Bush’s case, he protected the people of Islamic faith that reside in the US, while simultaneously planning a precision strike on the people responsible for the attack.

As for Biden, he did his best to keep us out of war. He prevented us from being directly being involved by not deploying troops to Ukraine. Now, whether that turns out to be the right decision as a policy, I think is still uncertain. Whether it proves to be the right thing or not will remain to be seen in the coming days.

To hear more from David Gergen and his thoughts on the current state of the world, download and listen to this episode.

David Gergen is a professor of public service and founding director of the Center for Public Leadership at the Harvard Kennedy School. In addition, he serves as a senior political analyst for CNN and works actively with a rising generation of new leaders.

In the past, he has served as a White House adviser to four U.S. presidents of both parties: Nixon, Ford, Reagan and Clinton. He wrote about those experiences in his New York Times best-seller, Eyewitness to Power: The Essence of Leadership, Nixon to Clinton (Simon & Schuster, 2001).

In the 1980s, he began a career in journalism. Starting with the MacNeil-Lehrer NewsHour in 1984, he has been a regular commentator on public affairs for some 30 years. Twice he has been a member of election coverage teams that won Peabody awards, and he has contributed to two Emmy award-winning political analysis teams.

In the late 1980s, he was chief editor of U.S. News & World Report, working with publisher Mort Zuckerman to achieve record gains in circulation and advertising.

Over the years, he has been active on many non-profit boards, serving in the past on the boards of both Yale and Duke Universities. Among his current boards are Teach for America, The Mission Continues, The Trilateral Commission, and Elon University’s School of Law.

David’s work as director of the Center for Public Leadership at the Kennedy School has enabled him to work closely with a rising generation of younger leaders, especially social entrepreneurs, military veterans and Young Global Leaders chosen by the World Economic Forum.

Through the generosity of outside donors, the Center helps to provide scholarships to over 100 students a year, preparing them to serve as leaders for the common good. The Center also promotes scholarship at the frontiers of leadership studies.

David has been married since 1967 to Anne Elizabeth Gergen of England, a family therapist. They have two children and five grand-children.

His son, Christopher is a social entrepreneur in North Carolina as well as an author and member of the Duke faculty. His daughter, Katherine is a family doctor, working with the underserved population at the Boston Medical Center.

Check out his new book: Hearts Touch with Fire