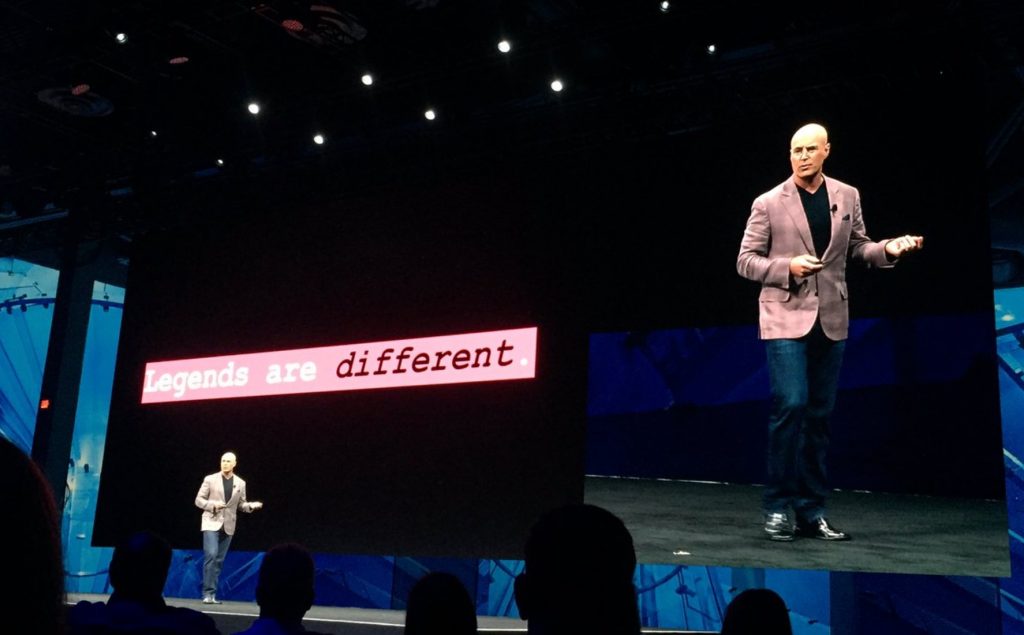 “There is one thing stronger than all the armies in the world, and that is an idea

whose time has come.”

This comment raises a question: How do I make it “my time?”

Have you noticed? The most legendary people in the world are different.

They do not fit in.

And the most legendary companies don’t just make stuff to sell us.

They are not incrementally improving on whatever came before.

They create massive new value by taking an exponential leap.

Here’s how most entrepreneurs think…

Tragically, too many companies seeking to find their place in the world fail to reach that destination.

U.S. government statistics show that roughly 20 percent of all new companies don’t make it through their first year.

Half make it through five years, and only one-third live to celebrate their tenth anniversary.

This happens, in part, because most business owners and entrepreneurs focus on two things:

They launch their new company, product, service or innovation into the world, and they hope the world “gets it.” They subscribe to what might be the biggest single fallacy in business:

“Build it, and they will come.”

The common entrepreneur believes his or her product is so awesome that it will speak for itself. When the world hears how much better, faster or cheaper this new product or service is, people will flock to it!

Sometimes, this approach works. Most of the time, it doesn’t.

…and here’s how YOU need to think.

To increase the odds of winning, forward-leaning entrepreneurs are embracing a business discipline called category design.

Category design aims to tease out the intuitive approaches that the world’s greatest innovators use to create new market categories.

In doing so, we establish a replicable approach to designing (or re-imagining) market categories.

Category design is about establishing your own niche by getting people to think about a problem — and its solution — in exactly the way you want them to.

Sheryl O’Loughlin (our guest on episode #071)is the former CEO of Clif Bar who helped create Luna Bar, the first protein bar specifically formulated for women.

Protein bars were an emerging new category at the time, and Sheryl’s team recognized that women wanted something smaller and tastier, with fewer calories and nutrients particularly good for female body chemistry, like folic acid and calcium.

This was a risk: Clif worried that Luna would cannibalize sales of its flagship product. Marketing gurus scoffed at the potential for a snack for gals.

But by tying the product to a cause — the Breast Cancer Fund — and creating packaging that was decidedly more feminine than the competition, Sheryl and company defied the naysayers.

The original product generated sales of $10 million in its first year.

Sheryl is also the category designer behind Plum Organics (now owned by Campbell’s Soup), which pioneered the healthy baby food niche in a convenient, squeezable container.

That concept was a new niche at the time, too.

In each case, Sheryl niched down.

She created a new and different product, company and category.

As result, her companies became category queens, aka the company that dominates a category.

And it takes a certain finesse.

“You’re doing something that no one else has ever tried before, and you need to believe in it in your heart and soul, or else you’re never going to get anyone to come on this epic adventure,” Sheryl shared during our conversation.

“However, that has to be placed in concert with humility. Because humility is about learning. And the best startups are companies that learn.”

History proves that pulling a Niche Down works.

Many of the elements of category design have existed for over a century.

Over time, many of the greatest innovators instinctively knew that the path to success was in teaching the world to think a particular way, not just offering them a product and hoping they’d “get it.”

These legends made sure that the world understood why their businesses and products mattered.

For example, Henry Ford knew that the horseless carriage mattered to more people than just the wealthy.

Before his Model T debuted in 1908, automobiles were primarily a bespoke privilege — made to order for the nouveau riche.

His breakthrough was refining the model of mass production, which in turn allowed him to create and evangelize a new category of affordable transportation.

And Clarence Birdseye had to make the case that frozen food — versus fresh or canned food — solved a problem they didn’t realize they had: finding fresh-tasting vegetables in winter.

Clarence Birdseye realized that vegetables could be flash-frozen, a discovery we’re still eating up today.

Clarence created ads positioning frozen vegetables from Birds Eye as a fresher-tasting alternative to canned ones.

He created refrigerator rail cars so that freight train operators could transport his product.

And he helped grocers invest in freezers to keep the bags frozen.

Once the world agreed with Clarence’s problem, they fired up their horseless carriage, drove to the grocery store and demanded frozen food.

Spanx founder Sara Blakely established “shapeware” as a whole new space and was able to distinguish herself in the mega-crowded undergarment market and build a billion-dollar-plus- valued category king from nothing.

But women didn’t know they needed shapeware before Sarah came along. She had to tell them, with marketing.

And Salesforce.com founder Marc Benioff used his “no software” point of view to educate enterprise software buyers about the evils of “on-premise” software and the virtues of a new category called “cloud computing.”

They didn’t know how much they despised on-premise hassles… until Marc told them about another way.

This is how new niches get created. And the company who designs the niche is best positioned to dominate it.

And you can apply category design to any industry.

The greatest innovators and entrepreneurs are category designers who do three things:

Category design involves creating a great product, a great company and a great category at the same time.

It is a broad, deep discipline that impacts every part of a company and its leadership team.

Category design is a strategy for aligning the whole company to become the leader in a giant new space that you’re the creator of.

Category design is about being original. Become known for a niche that you own.

Christopher Lochhead is Host the hit “dialogue podcast” Legends & Losers and Co-Author of #1 Amazon Bestseller Niche Down: How To Become Legendary By Being Different and Harper Collins’ “instant classic” Play Bigger: How Pirates, Dreamers and Innovators Create and Dominate Markets.

Heather Clancy is an award-winning journalist specializing in coverage of transformative technology and innovation. She’s the editorial director for GreenBiz.com, and her work has appeared in Entrepreneur, Fortune, The International Herald Tribune and The New York Times.

Heather is CoAuthor of the #1 Amazon Bestseller “Niche Down: How to become legendary by being different.” See more of her work on her blog, Twitter and Facebook.