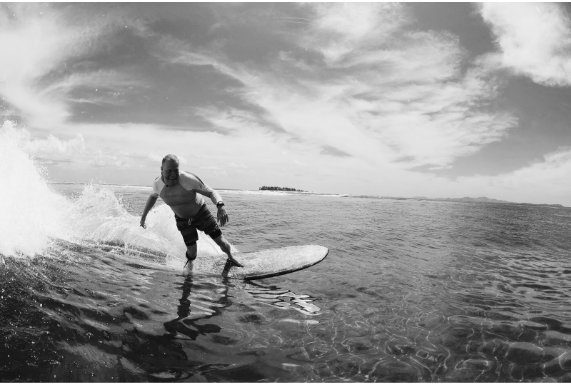 Nearly four decades ago, a seventeen-year-old coder living in Boston, Massachusetts with $400 to his name packed his bags, climbed aboard a Green Tortoise Bus and high-tailed it 3,000 miles across the country to San Francisco, California.

There, my buddy and podcast guest, Big Ben Rewis would spend the next thirty-eight years of his life as a trailblazer in big-tech, leading the way for titans like Visa, JP Morgan Chase, and First Data as they underwent large-scale digital transformations.

One of the things I love about Ben is unique compared to other technology strategists, as he often finds himself occupying two wildly different worlds: both the digital and the physical.

When Big Ben isn’t coaching leaders of massive digital initiatives for Fortune 1000 companies or founders of digital-native startups, he’s climbing mountains, sailing and surfing around the Tasman Sea or hiking the world’s deepest canyons. In 2019 he was honored as Fellow Royal Geographic Society Fellow (FRGS), an honor he shares with Charles Darwin and Sir Edmund Hillary.

It’s this dress shoe on one foot and hiking boot on the other that has allowed Ben to perceive data and technology more like a cohesive ecosystem rather than simply numbers on a screen.

But, more than this, Ben’s passion has brought him to the realization that data and technology can not only make companies copious amounts of money… but they can help change (and hopefully save) the world, too.

Inspired by Jake Burton, Big Ben was an early pioneer in Snowboarding and rode some of Jake’s first boards in Vermont. He was a competitor taking 17th overall in the first world championships for snowboarding. He even got to write an article about it for Thrasher magazine.

He was 17 when he realized the connection between technology, entrepreneurship, and nature. In many ways, Ben’s life has been a quest to live at the center of those three things ever since.

A lesson learned in the waves.

Ben Rewis caught his first wave at forty years old somewhere along the coast of Santa Cruz, California. After that, he was hooked, spending the next decade and a half surfing waves both right in his backyard and thousands of miles away in New Zealand.

It was Ben’s love for the ocean (and getting fed up surfing alongside trash) that attracted him to Save The Waves Coalition, a global nonprofit organization dedicated to protecting coastal resources.

Like so many of the companies he had advised over the years, this non-profit on a mission to save the ocean one surf zone at a time was missing out on huge opportunities in both technology and data.

Ben volunteered his expertise in data and technology to work alongside Save The Waves to create a mobile application called The Endangered Waves App that would go on to “make waves” in both the non-profit and technology sector as a whole… winning an X-Prise award for best conservation app.

Big Ben’s strategic thinking behind Endangered Waves was to design it so that it would function on crowdsourced data. While Save The Waves is a global non-profit, they can’t be everywhere at once.

So, the application encourages beachgoers and surfers to monitor their coastlines easily by taking a picture of a threat they see, selecting an issue that most accurately defines the threat (like erosion, sewage, oil spills, etc) and then tagging their location.

This then propagates onto a large scale map working as a living breathing data set for Save The Waves and the agencies they advise, allowing them to make better faster decisions on a global conservation level.

One might think of Pareto’s Law where 80% of effects come from 20% of the causes. To put it in terms of business, generally speaking, 80% of a company’s revenues come from either 20% of their customers or 20% of their products.

So, a short-cut to not only efficiency but large-scale growth and impact are doubling, tripling and quadrupling down on this 20%.

While Save The Waves eventually hopes to eliminate ocean threats, a huge win would be to eliminate 80% of threats. And, if Pareto’s Law holds true… this 80% is coming from 20% of the world’s beaches –– the application allows Save The Waves to pinpoint this 20%.

Back in 2017, there was a study done that estimated the worldwide surfing industry to be worth a staggering $50 billion a year. On a more micro level, the city of San Clemente, California brings in an estimated $8 – $13 million a year from surfing alone.

Naturally, if one day surfers have to worry about running into metal oil drums, plastic containers, fishing nets, and sewage whilst doing the thing they love, it’s safe to assume they’ll take their boards elsewhere, somewhere far away from San Clemente.

This is a real-life example of where data can directly equate to money.

While Save The Waves is on a mission to clean up the planet’s waters, professional surfers, surf brands and beach towns all around the world should be backing them because their success will be a huge contributor to the ongoing financial health of the surf industry.

This is a congruence Ben has seen in the private sector, too… that data often times equals money.

But, in order to capture this data and ultimately make decisions with the data being captured that can either be monetized or cut costs, organizations must have the right digital business. Otherwise, they’ll end up like the semi-recently extinct Radio Shack and Toys R. Us.

Where technology, data, and nature collide.

Leonardo Da Vinci gained an in-depth understanding (centuries ahead of his time) of aerodynamics by watching the flight of birds.

Georges de Mestral, a Swiss electrical engineer, thought up the idea of Velcro after a hunting trip in the Alps where he noticed the way burrs from burdock plants attached stubbornly to his dog’s fur.

Lenovo, one of the world’s largest technology companies, is constantly designing their products with nature in mind –– their laptop fans are shaped like owl wings and their computer stands are similar to the stem of an orchid.

Big Ben takes the same approach when helping companies through a digital transformation by applying Biomimicry to the digital businesses he’s creating. For those who are not privy, Biomimicry is the imitation of the models, systems, and elements of nature for the purpose of solving complex human problems.

Big Ben views digital businesses in the same light –– that if data is eating the world, it better be putting out more data. He’s isn’t afraid to get granular though, either.

How businesses can begin on their journey towards Digital Transformation today.

When businesses or nonprofits like Save The Waves are making the push to go digital, here are a few tactical pieces of advice Big Ben always passes along.

PS For more with Big Ben Rewis you can enjoy our podcast dialogue here.