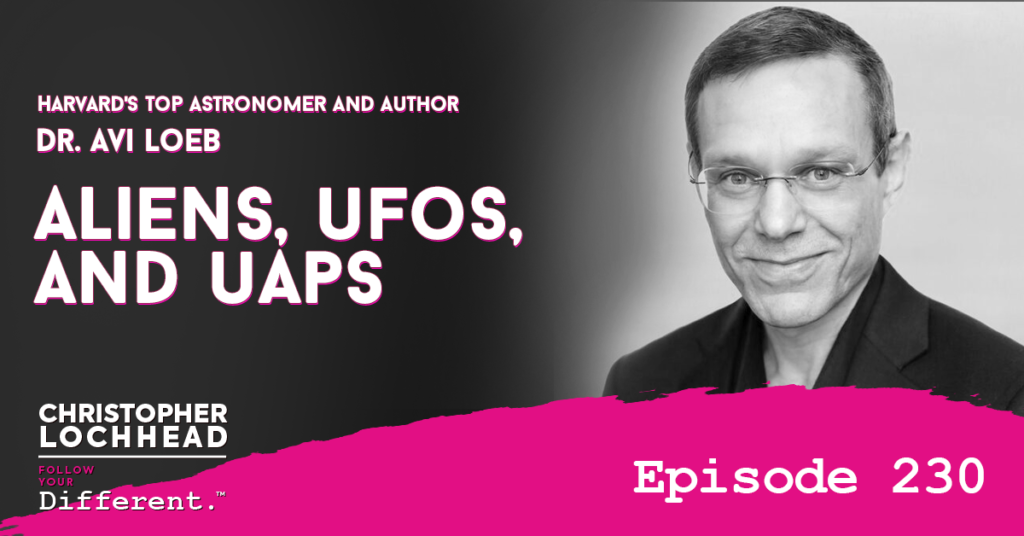 In this episode of Follow Your Different, Dr. Avi Loeb makes a return to give us an update about his work after he released his book, Extraterrestrial. If you are not familiar with Dr. Avi Loeb and his work, you can check out our previous conversation with him (FYD episode 202).

Dr. Avi Loeb is the most credential scientist and astronomer ever to say that we have been visited by something outside of our galaxy that is alien in nature. In 2021, Professor Loeb published a book called Extraterrestrial, The First Sign of Intelligent Life Beyond Earth. For me, the ideas shared in this book can be a game changer for humanity.

This time, Professor Loeb tells us why you can’t use the internet without using quantum mechanics, and about the connection between theoretical physics and Bernie Madoff. Also, if you have been paying attention to UFOs, Dr. Loeb unpacks what he thinks the US government’s latest disclosures on the existence of UFOs really mean.

All these and more on this episode, so stay tuned to the end.

When asked whether he had a particular though he’d like to share, Professor Loeb remarks that he wishes that these unidentified phenomena in the sky be explored through scientific experiments.  There have been a lot of people giving their thoughts on the matter, but they’re simply not qualified to give such statements.

While data might be sensitive and are often classified, at the very least have someone with a scientific background deliver the explanation to such events. Rather than a politician who is not equipped to assess the nature of these phenomena, it’s better to have an expert digest the information and deliver it in a concise manner.

“These are serious people and they had access to the classified information, they talk about it seriously. But they cannot really assess the nature of this phenomenon, and they were trained as either politicians or administrators.

When you go to a shoe maker, you don’t expect the shoe maker to make you a cake. I mean, it makes no sense for them to make statements that are scientific.” – Dr. Avi Loeb

The Stigma and Taboo of Anomalies

Regarding the UFO sighting report, Professor Loeb comments that there could be a lot more that have not been reported. This is because of the stigma of bringing up UFOs or certain unusual phenomenon. In this day and age, it’s almost seen as a taboo to discuss such things.

Professor Loeb finds it strange that it is the case. For some reason, anomalous evidence is unpopular, almost to the point of being shunned. Though if you look at the history of science, these anomalous evidences are what brought a lot of progress in different fields.

“Why is anomalous evidence so unpopular? To me, it’s really strange, because if you look at the history of science, most of the progress was a result of experimental anomalies. We saw something that we didn’t expect, we learn something new about nature. What you need to do, of course, is to verify that the evidence is robust. If it’s robust, then nature’s telling you, you didn’t really understand me. Here is something new that you have to figure out.” – Dr. Avi Loeb

Professor Loeb shares that it was the same before with Quantum Mechanics. Nobody really expected it, and it was something that was discovered through experiments. Although scientists like Albert Einstein resisted the notion at first. He even sought out to disprove it at some point.

Yet today, we build new technology and instruments that are based on these principles, particularly in communication. We might not fully understand it yet, but it shouldn’t stop us from exploring these anomalous behaviors and find out more about what nature has to offer.

“Quantum mechanics is definitely a facet of reality. We know that we use it and so forth, but we don’t fully understand it. And nature is under no obligation to make itself agree with our preconceptions. So every now and then we find some evidence that we were wrong in the way we think about reality.” – Dr. Avi Loeb

To hear more from Dr. Avi Loeb and his thoughts on Extraterrestrials, Quantum Mechanics, and the universe, download and listen to this episode.

Abraham (Avi) Loeb is the Frank B. Baird, Jr., Professor of Science at Harvard University.

He received a Ph.D. in Physics from the Hebrew University of Jerusalem in Israel at age 24 (1980-1986), led the first international project supported by the Strategic Defense Initiative (1983-1988), and was subsequently a long-term member of the Institute for Advanced Study at Princeton (1988-1993).

Loeb has written 8 books. These includes most recently, Extraterrestrial (Houghton Mifflin Harcourt, 2021), and about 800 papers (with an h-index of 113) on a wide range of topics. Topics include black holes, the first stars, the search for extraterrestrial life and the future of the Universe.

He had been the longest-serving Chair of Harvard’s Department of Astronomy (2011-2020), Founding Director of Harvard’s Black Hole Initiative (2016-present), and Director of the Institute for Theory and Computation (2007-present) within the Harvard-Smithsonian Center for Astrophysics.

Loeb is a member of the President’s Council of Advisors on Science and Technology (PCAST) at the White House and a member of the Advisory Board for “Einstein: Visualize the Impossible” of the Hebrew University.

In 2012, TIME magazine selected Loeb as one of the 25 most influential people in space. In 2020 Loeb was selected among the 14 most inspiring Israelis of the last decade.

Click here for Loeb’s commentaries on innovation and diversity.