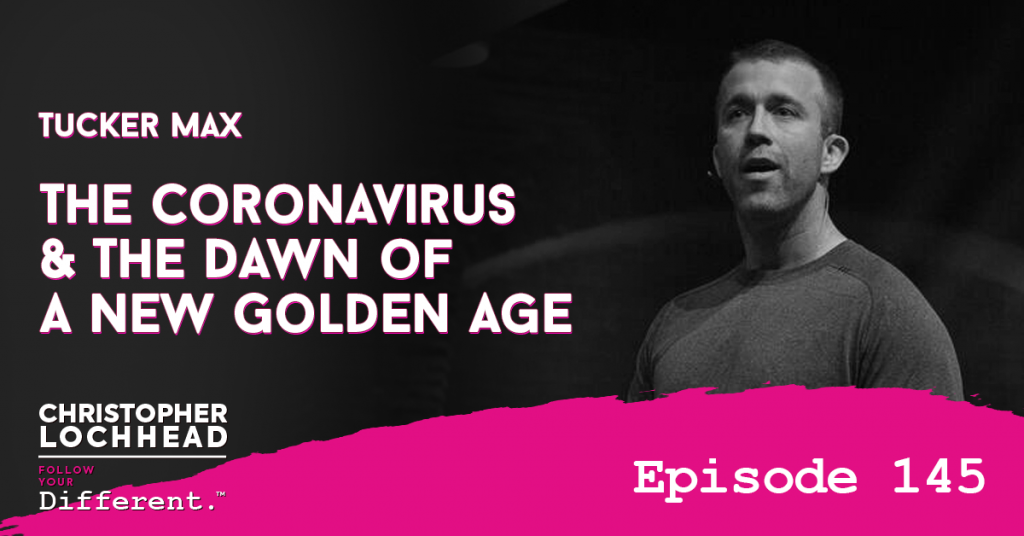 Humor, Next to Grief

Tucker Max had such a huge impact on our culture. He’ s only the fourth writer (along with Malcolm Gladwell Brene Brown and Michael Lewis) to have three books on the New York Times Nonfiction Best Seller List at once. Time Magazine has called him one of the 100 most influential people.

He shares in this episode the importance of humor to go through our current pandemic. He thinks that society created certain people, those who are “progressive, social justice warrior and driven by a certain extreme toxic brand of “feminism” who are humorless and are too stern with their beliefs.

“Laughter is next to grief in terms of how emotions are processed. The sadness and suffering are the core part of life and the way you deal with it, one of the ways is to laugh about it. People who are humorless don’t get that.” – Tucker Max

Christopher shares about companies who are winning in the age of the coronavirus are those who are practicing radical generosity. Companies must have a certain “do-good mission” to be able to claim their title as category kings and queen.

Tucker shares how he agrees to this move of several companies. He also urges companies to give away information for free. He gives out comments to individuals who sell their downloadable PDFs and monetizes it.

Outlook For The Future

Christopher believes we will see a huge cultural, societal and business shift. The three that immediately come to mind is office work in general, retail and telemedicine and digital medicine.

Tucker chimed in with his outlook for the near future:

“I am really happy I’m not in commercial real estate, because I think what’s gonna happen over the next 2 weeks is: everyone is gonna realize how bullshit offices are, how much more work they get done at home or how much they like working from home more. I think long term, we’ve just seen the top long term secular decline in commercial real estate and I think its a big one.” – Tucker Max

To hear more about Tucker Max, the coronavirus and how he is coping with it and the golden age that will rise after this pandemic, download and listen to this episode.

Tucker Max is the co-founder of Scribe Media, a company that helps you write, publish, and market your book.

He’s written four New York Times Best Sellers (three that hit #1), which have sold over 4.5 million copies worldwide. He’s credited with being the originator of the literary genre, “fratire,” and is only the fourth writer (along with Malcolm Gladwell, Brene Brown and Michael Lewis) to have three books on the New York Times Nonfiction Best Seller List at one time. He was nominated to the Time Magazine 100 Most Influential List in 2009.

He received his BA from the University of Chicago in 1998, and his JD from Duke Law School in 2001. He currently lives in Austin, Texas, with his wife Veronica and three children.