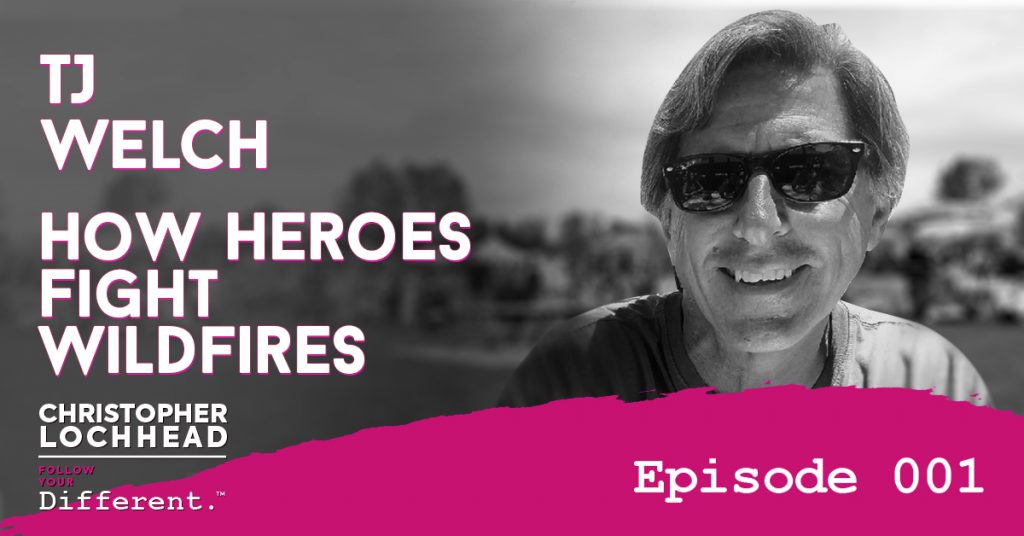 How do you mobilize thousands of firefighters to tame a terror that could ravage lives and billions? On this episode of Follow Your Different™, Retired Battalion Chief TJ Welch tells us how. He shares a riveting story of leadership applicable to real life, how preparation is key to saving thousands, and so much more.

TJ Welch – Starting Out in the City

TJ spent the first years of his career dealing with brush fires and structural fires. He also had his fair share of wildland fires as a chief officer. But he and other city firefighters pretty much only stood guard in front of the houses.

It wasn’t until the late ‘90s when they made full use of city firefighters. They went to timber and brush areas to stop fires and perform other operations.

“This was my moment where it kind of changed my perspective of my role as a chief officer.” – TJ Welch

Back in the day, the biggest of wildland fires reached up to 160 thousand acres, which is equal to the same number of football fields. This number has been expanding in recent years, reaching up to 200 thousand acres of wildland catching fire.

The terrifying numbers make sense when taken in the context of the number of residences, the timber that is involved, how exposed the wood is, and how quickly it burns. These wildland fires burn a couple of football fields per second. They are impossible to outrun and risk many lives.

There’s a lot of reasons as to why wildland fires catch so quickly. On the other hand, timber could take a while to dry and get moisture back. With the drought that has gone on for so many years along with other forest products left out in the open, the wildland fires have become more gigantic.

There was one fire that forever changed TJ. This gave way to a collective effort to train firefighters in the art of effective mobilization when tempering these massive fires.

“When I left that fire, I said I’m not gonna be so ignorant when I come to another wildland fire.” – TJ Welch

To hear more about how California firefighters move as a unit and how TJ dealt with the massive responsibility of being a leader, download and listen to the episode.

TJ Welch is a 32 year veteran of the fire service. Throughout the course of his career he served in volunteer, industrial and municipal fire departments.

TJ retired in 2014 as Battalion Chief with Alameda County Fire Department. He currently teaches and writes Officer courses for OSFM, and is an Firefighter Safety Specialist for California Department of Public Health and NIOSH where he investigates firefighter line of duty deaths.

How to donate to victims of the Butte/Camp Fires in California:

Background on the Butte aka the “camp fire”:

The deadliest, most destructive wildfire in California’s history has finally been contained

After a Wildfire, Rebuilding Life Can Be Hardest for the Oldest