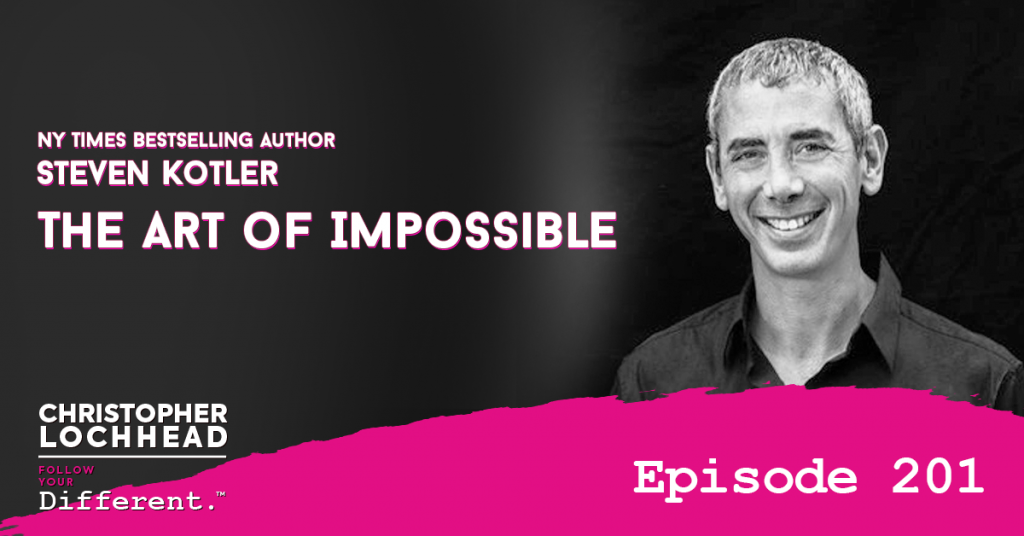 Today, we have the legendary Steven Kotler to talk about how we can turn the impossible into possible, using insights from his book, The Art of Impossible. The book is about peak performance and it aims to teach us how to stretch far beyond our capabilities to attain our dreams and anything we want.

Steven states that in the field of peak performance, personality doesn’t scale because biology does. Personality is composed of traits that are immutable and locked in. He also describes neurobiology as a mechanism of brain work.

“If you try to figure out what works for me and use it to train you and if you’re not exactly the same kind of person I am with the same personality traits, this is not going to work. But underneath that one level down, there is a level of biology. A way the system has been designed to work, and that is the part that we all share. The stuff that evolution designed for all of us to share.” – Steven Kotler

Steven says that you always have to focus on what you pay attention to, or what you ignore. Curiosity, passion, purpose, and autonomy are designed to work in a specific sequence, but all of them give us focus for free. He also says that the whole point about biology and the human system is you get farther and faster with less work.

“We are hardwired for the extraordinary. It is one of the surprising things about being human that most people don’t realize. To take it a step farther, not going big, is actually bad for us. That’s an equally important point here.” – Steven Kotler

Today, we live in a world filled with probabilistic threats, which is the reason why most people have anxiety. Steven concludes that the brain doesn’t turn off until the danger is gone completely. So, you have to take steps to calm nervous system down because it won’t shut down on its own:

“Most humans can feel curiosity and anxiety at the same time. Talk about reframe and cognitive reframing, a technique for turning anxiety into excitement. Because it’s the same chemical and it’s very easy to do. An example of giving biology to work for you rather than against you. We’re plagued by anxiety, and yet we’re hardwired to turn anxiety into excitement very easily just with the right tools.” – Steven Kotler

To know more about the art of the impossible with Steven Kotler, download and listen to this episode.

Steven Kotler is a New York Times bestselling author, an award-winning journalist, and the Executive Director of the Flow Research Collective. He is one of the world’s leading experts on human performance.

He is the author of nine bestsellers (out of thirteen books), including The Art of Impossible, The Future is Faster Than You Think, Stealing Fire, The Rise of Superman, Bold, and Abundance.

His work has been nominated for two Pulitzer Prizes, translated into over 40 languages, and has appeared in over 100 publications, including the New York Times Magazine, Wired, Atlantic Monthly, Wall Street Journal, TIME, and the Harvard Business Review.