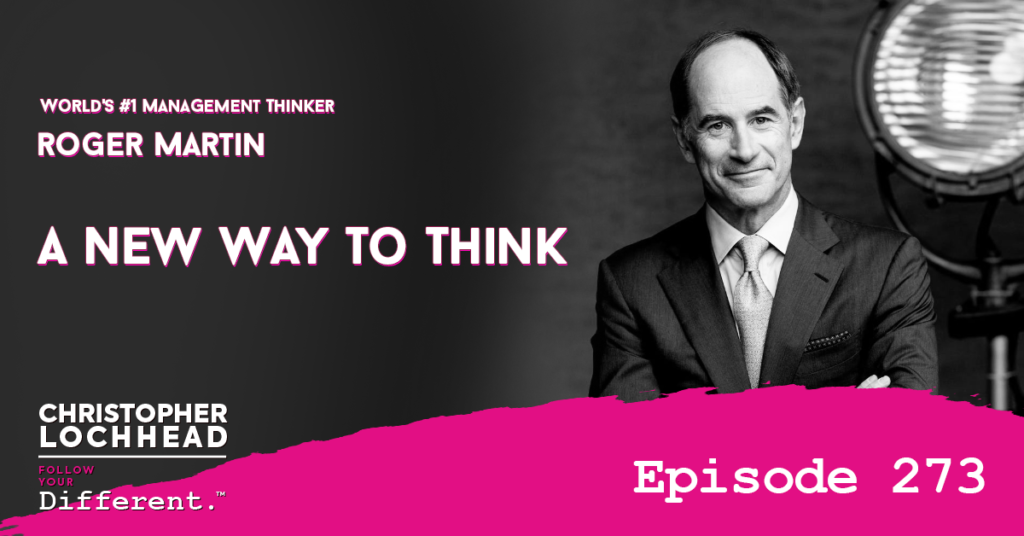 On this episode of Christopher Lochhead: Follow Your Different, we have a radically different dialogue about thinking with the legendary Roger Martin – a man who has been called, “the world’s number one management thinker” by former Ford CEO Jim Hackett.

Roger Martin is a Professor Emeritus at the Rotman School of Management at the University of Toronto, where he served as Dean from 98 to 2013, and as Institutional Director of the Martin Prosperity Interest Institute from 2013 to 2019. In 2013, he was also named Global Dean of the Year.

In this remarkable conversation, we dig into the definition of thinking. We also discuss the difference between what Roger calls reflexive versus reflective thinking, and why thinking is a meta skill. So if you are interested on expanding the way you think, stay and listen to learn more.

Roger Martin on Thinking about Thinking

The conversation starts off on the topic of thinking about thinking, and if it’s weird to do so. Roger offers his thoughts on the matter:

“I don’t think so, no. But you know, I am surprised at the number of people who seem to not think about how they think – they just think. And then when something kind of bad happens, they’re kind of flummoxed. The ones who are more inclined to think about how they’re thinking are more likely to say, “well, maybe I wasn’t thinking about that the best way I could, what would be a different way to think about it?” ” – Roger Martin

The Definition of Thinking

“I see it as the process of reflecting on your world against a model you have of it. So you’d be thinking, if you say, that person just smiled at me as we walked by each other. So that was stimulus to your senses. And to think about it, you have to have some kind of a model in your head interpreting it. So you would say, when the corners of the lips go up like that, it generally means that that person is kind of happy, or is favorably disposed toward me, and not they have a nervous tic. But that could be another interpretation of it. But you have some kind of model that says, “this is my method of interpreting what is happening to me.” “ – Roger Martin

The thing is, other people might not have the same model as you do, unless you are privy that information. This often results in clashes in models, or a misinterpretation of other people’s model because they are unfamiliar, or radically different from yours.

That is where thinking about thinking plays a role.

Roger was then presented with a thought about the current way of thinking:

“We live in a world today that what that says that what most people call thinking is actually the mental retweeting of something they heard that they like, that often confirms and existing thought. And that existing thought was something they were taught to think, ergo, what most people call thinking today is actually not thinking.”

Roger’s response is that conceptually, that is correct. But in a way, it is also another type of thinking.

To learn more about Roger Martin & the different kinds of thinking, download and listen to this episode.

Roger L. Martin is Professor Emeritus at the Rotman School of Management at University of Toronto, where he served as Dean from 1998 to 2013, and as Institute Director of the Martin Prosperity Institute from 2013 to 2019.

He has published 12 previous books including When More Is Not Better and Playing to Win (with A. G. Lafley), which won the award for Best Book of 2012-13 by Thinkers50. Martin is a trusted strategy adviser to the CEOs of many global companies. A

Check out Roger’s books on Amazon!