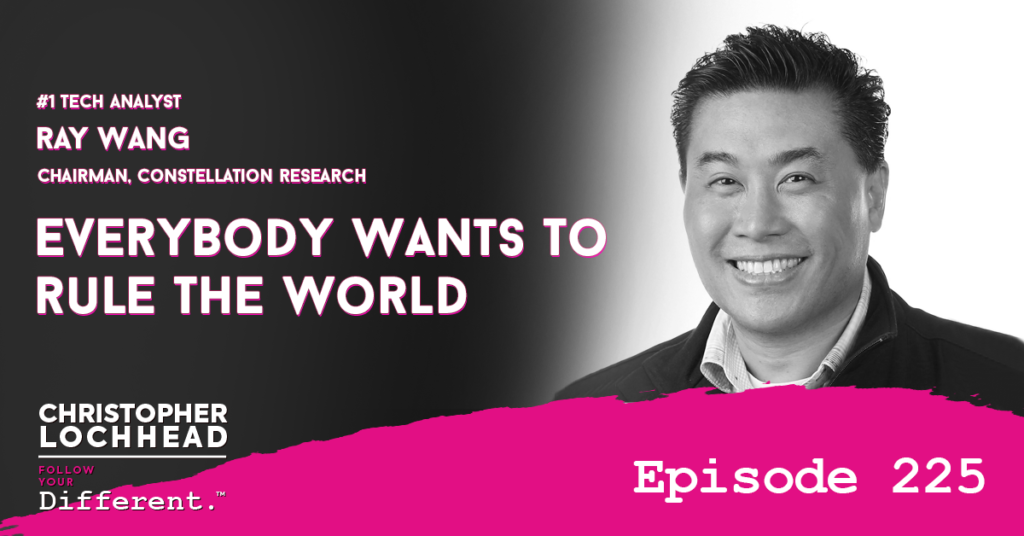 In this episode of Follow Your Different, Ray Wang is back to talk about how to survive and thrive in a world of Digital Giants.

Ray Wang is the world’s number one Tech Analyst, and the founder of Constellation Research. He has a brand-new book called Everybody Wants to Rule the World: Surviving and Thriving in a World of Digital Giants. We talk about the points he wrote in the book, as well as other recent tech-related events and breakthroughs. This is a fascinating conversation with one of the smartest guys in tech, so you wouldn’t want to miss this episode.

When asked on the recent tech security breaches, Ray comments how we are vulnerable at the moment. It seems the current tech for protection available to the public is vastly outpaced by these breachers.

As to why these tech breaches keep happening, Ray quotes the Willie Sutton Rule: “Because that’s where the money is.”

He also thinks it is scary that if it is occurring here in the US, then how about other countries that might have less defense mechanisms in place? While you can expect corporations to have systems in place to counter that, it can be harrowing for smaller companies.

Ray’s advice is that your company should always have a back disaster recovery ready to go. So if your company was unlucky enough to get hit these breachers and ransomware hackers, you can just revert your system using that backup. You might lose a few hours work due to it, but it’s better than succumbing to these malicious entities.

Ray Wang: Everybody Wants to Rule the World

With the cost of access to fast internet and tech becoming cheaper by the minute, more people are swarming the net as we speak. One commodity that is often overlooked when moving around the web is your personal information.

“First thing is, you have to believe in the fact that your personal data, genomics, and digital exhaust should all be property rights. The reason that’s important is because we have laws that talk about how you treat and give consent to property. Land rights, invention, IP and trademarks, right?

The good news is property laws exist. And in every state, country, and jurisdiction, you just have to say, “look, your personal data is a property, right?” And if somebody wants to use it, you need their consent. Suddenly, boom, you actually now have a whole economy around data. You’ve actually put the ownership of data back in the hands of the people that are creating that data.” – Ray Wang

So why is this important? Because for something that should be property, we seem to be giving it away easily in exchange for simple access. These Digital Giants then use that information to further benefit on our behalf, turning you into a product rather than a user.

Ray elaborates further by comparing Facebook and Google, and how these two Digital Giants operate. What’s fascinating is how Google is often perceived as the good guy, while Facebook is the bad one. When in truth, both giants have the same aim, it’s just that their delivery varies.

“Amazon is the ultimate digital giant. I mean, it’s got ads. It’s got search. It even has subscriptions via memberships and prime. It’s got the goods and the services and their own network that’s on the back end. So that’s really what’s going on. We see a rise of these things called Digital Giants that have dominated markets, but they’re battling each other out for every digital monetization model there is.” – Ray Wang

Want to learn more from Ray and how to thrive in the world of Digital Giants? Download and listen to this episode.

R “Ray” Wang (pronounced WAHNG) is the Founder, Chairman, and Principal Analyst of Silicon Valley based Constellation Research Inc. He co-hosts DisrupTV, a weekly enterprise tech and leadership webcast that averages 50,000 views per episode and authors a business strategy and technology blog that has received millions of page views per month.  Wang also serves as a non-resident Senior Fellow at The Atlantic Council’s GeoTech Center.

Since 2003, Ray has delivered thousands of live and virtual keynotes around the world that are inspiring and legendary. Wang has spoken at almost every major tech conference. His ground-breaking bestselling book on digital transformation, Disrupting Digital Business, was published by Harvard Business Review Press in 2015.  Ray’s new book about Digital Giants and the future of business titled, Everybody Wants to Rule the World will be released July 2021 by Harper Collins Leadership.

Wang is well quoted and frequently interviewed in media outlets such as the Wall Street Journal, Fox Business News, CNBC, Yahoo Finance, Cheddar, CGTN America, Bloomberg, Tech Crunch, ZDNet, Forbes, and Fortune.  He is one of the top technology analysts in the world.

Check out Ray Wang’s latest Book: Everybody Wants to Rule the World