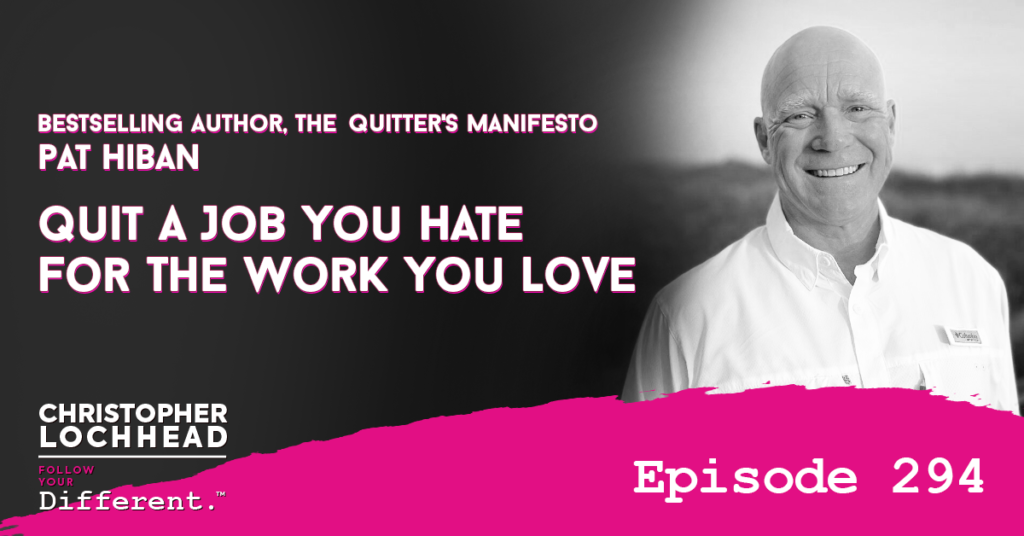 On this episode of Christopher Lochhead: Follow your Different, we discuss the idea of keeping a successful career that you have stopped liking a long time ago versus quitting it to find one that you find more fulfilling. And who better to have this conversation than with our guest, Pat Hiban.

Pat Hiban is the bestselling author of the book, The Quitter’s Manifesto. He is an investor, author, podcaster, and a guy having a very good time living an epic life.

By the end of this dialog, you will gain radical new insights to build your muscles for designing the life of your choosing, and not just do something because of a current trend.

Pat Hiban on The Quitter’s Manifesto

The conversation starts with Pat Hiban’s book, The Quitter’s Manifesto, particularly on the topic of why he wrote it, and his inspiration while doing so.

Pat shares that during the past year or so that we were all locked up, people had time to think a lot about their work conditions, and what they want to do in life.

“It was during COVID. I just heard of a lot of people making decisions to change jobs and the change the location of where they were working from. Also, we had this great resignation going on.

I saw it, and I called Tim and I was like, “Tim, the one thing that I learned from you, you are my mentor in quitting, and I said, we should write a book on quitting.”” – Pat Hiban

So Pat and Tim Road pooled their thoughts together and The Quitter’s Manifesto was born.

Pat’s idea for the book was that it should be a tactical, step-by-step book. So first things first, they have to acknowledge the reality of things: that quitting a stable career is scary.

“The first chapter in the book is called, Acknowledging the Truth. And the truth is, quitting is very, very scary. It’s like going to a cliff and jumping off.” – Pat Hiban

For entrepreneurs, taking the jump is just Tuesday to them. This is because before they jump, they already have a parachute or glider ready even before they take the leap. Normal people do not always have those prepared beforehand, and jump blindly to their doom.

So the aim of The Quitter’s Manifesto is to create rope swings that they can hang on each chapter, and at the end of it all, a net of safety when you finally decide to take the plunge.

The weird thing about this is that they may already be earning a lot more monthly than that potential “healthcare benefit” might provide, but they still hedge because they don’t want to let go of that supposed “security blanket”.

“I talked to a guy yesterday that had a family health care plan, it was worth $2,000 a month. And he wouldn’t quit his work because of it, even though he was flipping real estate on the side, making 400 grand a year. He wouldn’t go to flipping real estate full time, just because he wanted that healthcare. And then he finally did quit, and he realized how minuscule that the healthcare actually was, it didn’t matter.” – Pat Hiban

To hear more from Pat Hiban and The Quitter’s Manifesto, download and listen to this episode.

As a young child, Pat Hiban was labeled “learning disabled with speech deficiencies” and put into special classes.

Through his teenage years, Pat fell forward through life and tried everything he could to find his purpose, including 2 years as a 4th string player (benchwarmer) on the lacrosse team.

He graduated from college with a degree in sociology and a 2.6 GPA. After being turned down for several corporate sales positions out of college, Pat jumped into real estate and sold 10 homes his first year (6 condos, 1 house, and 3 mobile homes); he earned a total of $13,200.

Through the consistent application of 6 steps, Pat grew his real estate business each and every year.

In 2006, he was honored with the same recognition by Keller Williams Realty. Now, having sold over 4,000 homes and over one-billion dollars in volume, Pat is one of only a handful of residential real estate agents internationally to hold the title of Billion Dollar Agent. Pat is also an avid real estate investor, a venture capitalist, and the founder of Rebus University: an online training platform for real estate agents who want the secrets that most successful agents try to keep to themselves.

On average, Pat takes 153 days off each year to spend with his wife of 18 years and his two daughters.

In his book, he outlines the exact process he follows to earn more working less so you can too. He lives in a suburb of Baltimore, Maryland.