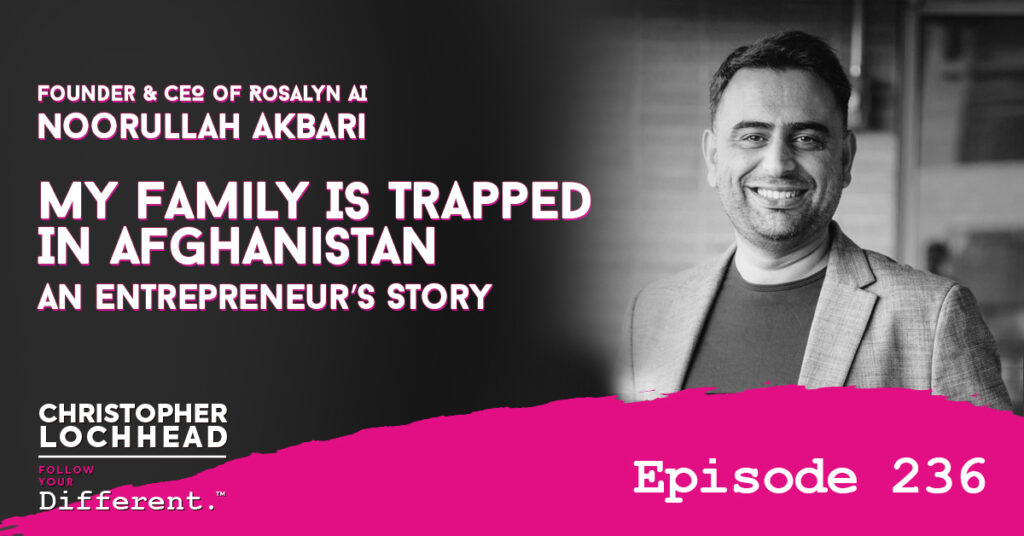 Imagine the life you love, the freedoms you enjoy, and the opportunities you have. All the safety and security you take for granted, vaporized in a matter of days. Imagine that many in your family, friends, and loved ones are now hostages. Noorullah Akbari doesn’t have to imagine any of that.

In this episode of Follow Your Different, Noorullah Akbari talks about the situation of his family and millions of Afghan citizens that are still living in Kabul at this time. Noor is the founder and CEO of a company called Rosalyn.AI, and they are on a mission to use advanced technology in making a difference for students’ education. He’s also a former Afghan refugee living in the United States of America. Right now as we speak, Noor is fighting to get about 20 members of his family out of Kabul, Afghanistan.

Our hope is that this dialogue will help humanize the plight of the very real people in Afghanistan who are suffering right now who want out, and that this very real dialogue will be shared, emailed, tweeted and posted broadly in the United States.  Because no matter what you think about the US’ withdrawal in Afghanistan, there are now 35 million people who are experiencing the most horrifying change imaginable in their lives through no fault of their own.

Noorullah Akbari on the Taliban

We start the conversation by asking about the situation with Noor’s family. He shares that his sisters and their family, as well as some of his relatives are still in Kabul. They are quite afraid, and thought that there would be a massacre once the Taliban solidifies their hold.

While the Taliban has said that they will not do such a thing, the family do not trust their word. According to Noor, they think that the Taliban hasn’t done so because they do not want any negative perception at this time. As we live in a technological age, phones and the internet are everywhere. A simple picture depicting their violence could derail the “good image” they want to portray.

Though technology might be keeping the Taliban in check for now, there are limits to what it can do.

“When there are no cameras, they go after those who they believe have aided the infidels and foreigners. They (The Taliban) tell them now, they don’t do that currently in Kabul. And the main reason is, there are cell phones out there. They haven’t banned the internet yet, so that people can take pictures. That will cause them trouble with the international community. But the practice has always been to come after their enemies, kill them and take revenge. So no, you can’t trust the terrorists.” – Noorullah Akbari

Life on the Ground

Noor explains that while he wants to get all their relatives out of Kabul as soon as possible, there are some who are in immediate danger due to their previous involvement with the US forces.

Though he also stresses that most of the people in Kabul have worked directly or indirectly with the US at various times. So it wouldn’t be an exaggeration to think that all of those people will also be considered as enemies by the Taliban.

Yet some might be looking for a way out, simply because they do not want to live under another Taliban regime.

“I can tell you, they have all lived a life under the previous regime of Taliban. When you were going to watch soccer, right after there were public executions, or stoning of people, or beating of women. Women did not have the ability to walk around without men or without the Burqa. It was pretty brutal. You didn’t have any personal freedom, the economy was bad. People were walking around like zombies. And everybody remembers that.” – Noorullah Akbari

So when the US forces drove out the Taliban from Kabul 20 years ago, it was like a new lease of life was given to the citizens living there. To have that freedom taken away now, it’s understandable why people do not want to experience it all over again.

Getting Out of Kabul

When asked about the progress on getting his family out, Noor mentions that he has reached out to his connections to see if they could help, but so far they haven’t been successful. He thinks that either the State Department is currently overwhelmed, or that they are still in the midst of negotiations.

While Noor and others are still exploring other options to get the family out of Kabul, all of their current plans are dependent on how the US can negotiate with the Taliban. This is the most worrying part for Noor.

“All of our efforts are dependent on the negotiation between the US government and the Taliban, to see if they allow these planes to take off right now. From what I know, that’s a difficult thing to do. So they’re trying, but I don’t think the US has footprint there. So when you don’t have footprint and you don’t have leverage, you cannot rely on the Taliban’s mercy to tell you whether you can or can’t fly away.” – Noorullah Akbari

Now imagine that situation playing out with 4 million or so people in Kabul, who also have varying degrees of connection in the US. Yet they’re also grounded in Kabul, with nowhere to go…

To hear more from Noorullah Akbari and how the situation is developing in Kabul at this moment, download and listen to this podcast.

A three-time entrepreneur, Noor knows how access to technology can transform one’s life. Growing up poor in civil war era Afghanistan, the catalyst for his own transformation was the gift of a computer. That first computer led Noor to found Afghanistan’s first digital printing shop.

A year later, Noor sold the company to a government-backed enterprise to mark his first successful exit. Following stints as a translator and political advisor for the US military in Afghanistan, Noor emigrated to the United States and founded a language testing company.

The idea for Rosalyn’s scalable remote proctoring solution came from the challenge of assessing the language skills in far flung and sometimes hostile environments.

He partnered with machine learning expert Martin Jakobson to design the system and soon realized the value it could bring to the larger global assessment market.

Please consider supporting these Nonprofits who are helping with the situation in Afghanistan: