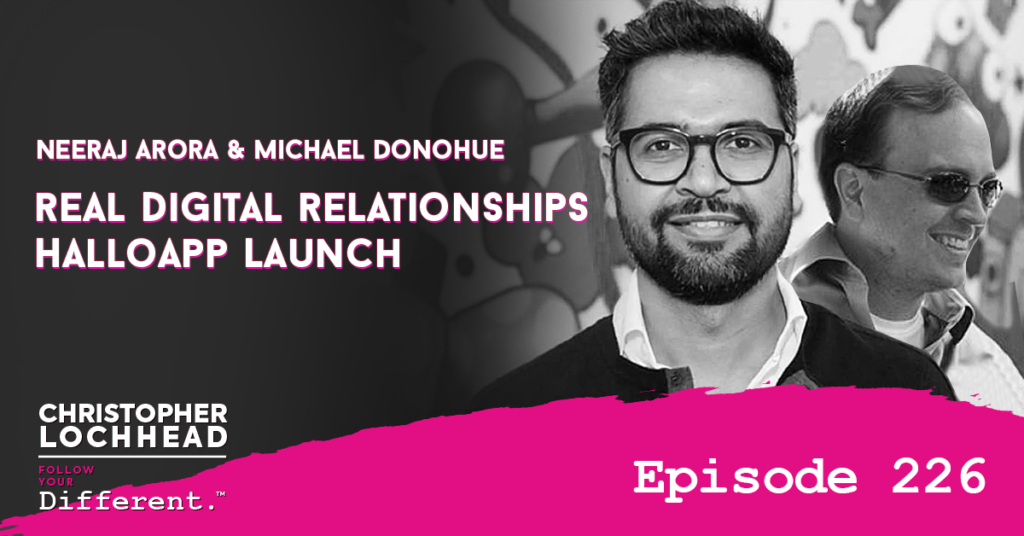 Welcome to this very special episode of Follow Your Different. We’ll talk about one of the most anticipated startups in Silicon Valley today, HalloApp. We sit down with HalloApp founders Neeraj Arora and Michael Donohue in the first and probably only – for some time – podcast.

Now, Michael and Neeraj are on route in pioneering a new category of “Real Relationship” app. It is a new model of communication app that is a combination of messaging and social functionality in a simple, private way.

They have the audacity to think they can change the future again by being radically different, and I all for it. If you are interested to learn more about what they have to offer, stay tuned to this episode.

When asked about something that most people don’t know about WhatsApp, Neeraj and Michael share an interesting story. If you’ve ever notice, WhatsApp never really talks to the press that much. It turns out that this particular quirk is something that the WhatsApp founders have developed into almost a culture, or a code if you will. It goes as such:

Simply put, the higherups on WhatsApp just wants to focus on developing their products and services and let it speak for itself. Why worry about tech press when they can just impress their users with their amazing product?

Plus when you create the attention, it just means added distractions and things to facilitate. Which in turn leads to less focus on the product and more on keeping up appearances.

So you could almost say that WhatsApp never came out of stealth mode.

It seems that Michael and Neeraj plan to follow the same code on their new endeavor, which is HalloApp. They will follow the same strategy of focusing on the user and the product, with minimal distractions.

This practice seems unorthodox and almost counterintuitive to what current companies are doing with their products, which is to hype up their products and make it popular even before its launch.

Yet for them, the focus is not to become famous or popular as an app of choice for most people. Their aim is to solve a problem, and find users that are looking for a solution. In the end, they will let the product speak for itself.

“I think the product should speak for itself. That’s it. Like if you do a good job of it, if you create user loyalty and trust, you don’t have to talk about anything about yourself or at all. Like, why do you need it, right? In the end, you should ask yourself the question, “why am I doing this?” And if the answer is I’m not getting to build a better product and more users, which is the case then then why would I do it?” – Neeraj Arora

Neeraj and Michael on Fast Growth

When asked further on PR and marketing, they believe the current way of pre-hyping the product won’t work for them. Their goal is to have users appreciate the product that they will share it to their family and peers, and let it grow almost naturally. It’s almost like they’re going back to the word-of-mouth approach in marketing, but digitally.

As for making it big, Neeraj comments that having a fast growth for a company is not always a good thing. Sometimes it even hurts your company in the long run. Neeraj and Michael would rather take it slow and build a product that will last forever, rather than aiming for large numbers at Day One.

“It actually hurts you, I think, fast growth. And fast growth is like the worst thing you can do for your product and your company. You would rather take a part of growing in a very thoughtful way and growing slowly and building a product that lasts forever. (For fast growth,) You’re going to have to get a million users at day one. I think that’s not what we’re doing this for.” – Neeraj Arora

If you want to hear more from Neeraj & Michael, and their thoughts on HalloApp and building digital relationships, download and listen to this episode.

Neeraj Arora started his career at the mobile messaging app company in November 2011, heading its business. From June 2015 to February 2018, he was also one of the Board of Directors at the Indian payments giant Paytm. Prior to that, from December 2010 to November 2011, he served Google’s Corporate Development team as the senior member, helming acquisitions and investments in an array of products across different countries. Under his leadership, Google acquired Picnik, Zagat, Talkbin, Slide, Dailydeal.de, and PittPatt among others. Before that, Arora was a Corporate Development Manager at Google from December 2007 to December 2010. As the manager of Corporate Development team, his was responsible for finding and implementing acquisitions and strategic investments.

Before coming to Google, Neeraj worked as the Chief Manager of Investments and Corporate Strategy team at Times Internet Limited (Indiatimes) from June 2006 to November 2007. However, his career began as a Program Manager at a cloud solution company Accellion Inc, which he joined in August 2000 after completing B.Tech in Mechanical Engineering from IIT-Delhi. His job lasted till April 2005.

Michael Donohue was one of the founding members of WhatsApp, who built the largest real time messaging network in the world. Since his resignation as an Engineering Director at WhatsApp, he has founded a stealth mode startup and invested in 10+ startups. He is well known in the startup community for mentoring and advising high potential entrepreneurs.

Michael has a B.S. in Computer Science from Carnegie Mellon University, and prior to WhatsApp, he worked as a Software Engineer since 2000 for companies such as PayPal, Coverity, and QVT Financial LP.