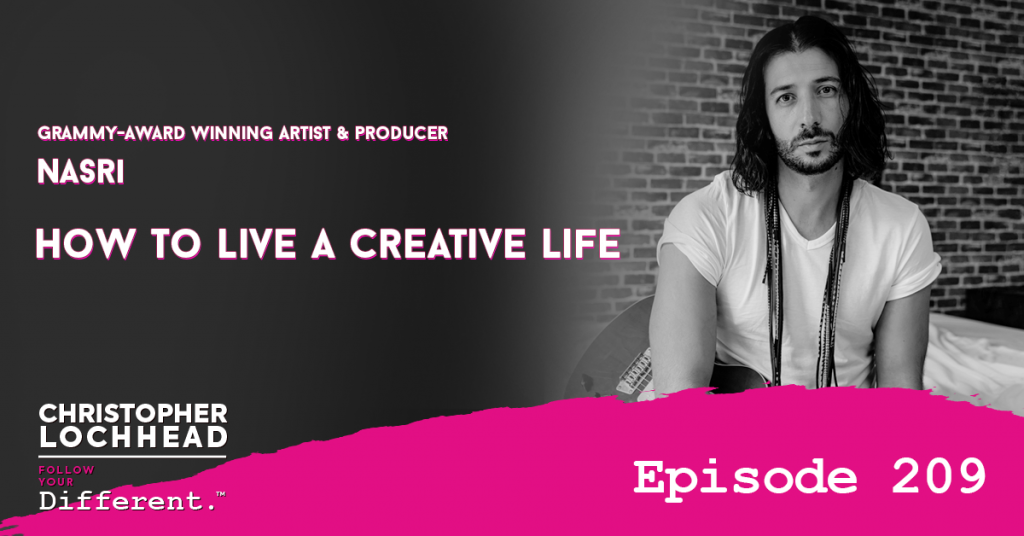 Most people would like to be more creative, and some would like to make a living with their creativity. Though without legendary role models, particularly those who are willing to get real and go deep about their experience, it’s hard to learn what it really takes. In today’s dialogue with Nasri, you’re going to learn about it and a lot more.

In this episode of Follow Your Different, it is all about Nasri. His music has been streamed over 4 billion times to date. He’s a Grammy Award winning songwriter, producer, and singer who’s worked with literally the biggest names in music today. Nasri has won a Grammy Award for his works, including Best Latin Pop Album for his work with Shakira on her record Eldorado in 2017, and Best R&B album for his work on Chris Brown’s F.A.M.E. record.

His band Magic! released three successful chart-topping albums with RCA Records, and he’s probably best known for their international smash hit “Rude”. He also just released a brand-new EP, a solo EP called “Here for You” to much critical acclaim.

This is also Nasri’s first podcast experience, so join him and Christopher as they discuss Grammys, working with great musicians, and how to live a creative life.

On Nasri Winning the Grammys

Christopher starts off with the big one, and asks what it was like winning the Grammys. Nasri shares his thoughts on collaborating with a lot of talented artists and producers in the industry, and the experience of creating Grammy Award-winning songs.

He also adds that nowadays, producing music is different than before. It’s normal to see five or more people being credited in one song, and that’s okay. All of it is necessary to create great music. Though it is understandable why some might be confused when they see multiple names in the credits.

“Now when you make music, everybody has a little piece of everything. It’s kind of confusing when you see four or five names on a credit, or even seven or eight, nine names on a credit of a song. It’s confusing to the audience to like “Seven people wrote this song?” No, seven people didn’t write the song. Two or three people wrote the song, and then it goes through a process of like, “hey, let’s team up with this sound designer”, and they also want a piece of the publishing.” – Nasri

Christopher brings up his experience on publications, and on why he chose to self-publish later on. Nasri agrees with the sentiment, and points out that it’s not a bad idea to work with a company first before trying to publish or produce on your own. At the very least, you’ll get some much-needed experience from them first and commit less mistakes when you are on our own afterwards.

“I think the beginning stages, if you look at why you may need a publisher, it has made me learn a couple things, you know. To see kind of what the scope of marketing for this medium is, and that’s what I went through. In the band Magic!, we were signed to RCA Records, and I was like, “Okay, cool.” When I went now to make my solo project, I felt like I had a pretty good grip of how to market something.” – Nasri

He’s also glad that he got into self-production. He talks about how he’s not on other people’s clock but his own, and he take his time and perfect his craft.

“I’m in no rush. I own the master. I have nobody telling me in some sort of meeting that is not moving fast enough. That’s (part of) what I didn’t like.” – Nasri

Speaking of producing something, Nasri recently released his new EP, “Here For You”. Nasri talks about how it came to be, and how much fun it was to create. He also got into the finer details and how happy he is with its reception.

“So all of a sudden, this whole thing just came together through us just being passionate about it. And some of the stories that in all the years of him making music, this is one of the first times that his wife has actually listened to the music on repeat, you know? Because generally, a lot of the stuff we make our wives are like, yeah, another pop song. They’ll listen to it once or twice and be like, “okay, cool”. But now, we went in and made some real music.” – Nasri

To hear more about Nasri and his thoughts on creating great music on his first-ever podcast, download and listen to this episode.

With over 4 billion streams to his name, Grammy-winning artist/producer Nasri Atweh has solidified himself as a certified hitmaker.

Lending his songwriting talents for artists including Justin Bieber, Halsey, Robin Thicke, Usher, John Legend, Skip Marley, H.E.R., Chloe x Halle and many more, Nasri has proven his ability to bring the best out of the artists with whom he works and elevate their art to a whole new level.

Nasri was born and raised in Toronto, Canada, and began singing at age 6. In 2002, Nasri won the John Lennon songwriting contest with a song he wrote with one of his closest collaborators, Adam Messinger.

Following this, Nasri and Adam then formed the production duo called “The Messengers.”

Together, they helped drive the reunion of New Kids on the Block and wrote hits for Christina Aguilera, David Guetta, Cody Simpson, Jason Derulo, and many more. Nasri and Adam were nominated for two Grammys in 2011 for their work on Justin Bieber’s My World 2.0andChris Brown’s Graffiti and the duo won the Grammy for Best R&B Album in 2012 for their work on Chris Brown’s F.A.M.E.

Additionally, Nasri won the Grammy award for Best Latin Pop Album for his work on Shakira’s El Dorado in 2017.

In 2013, Nasri took a step out from behind the curtain as the front man of MAGIC!